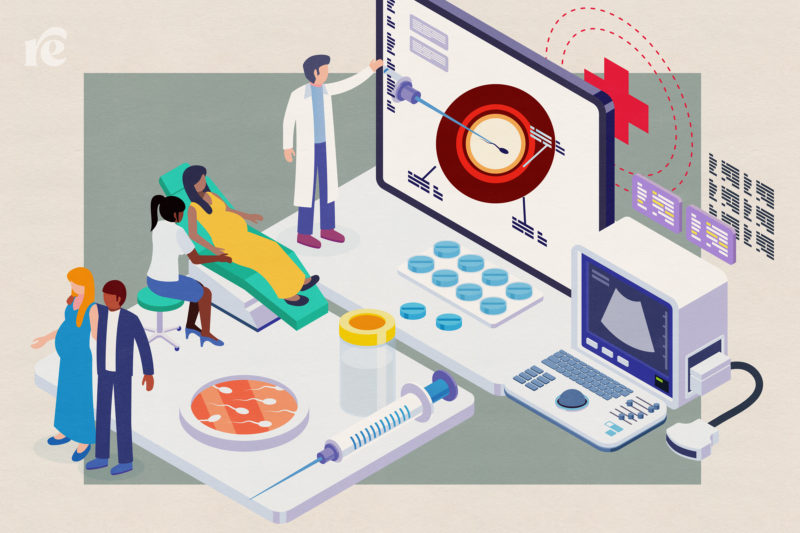 For people trying to build families through medicine, specifically in vitro fertilization, anti-abortion legislation is another barrier to an already inaccessible source of hope.

Injection after injection of hormones, egg retrieval, psychological stress on par with cancer patients, and the persistent, nagging question: Will it work this time?

And now this process, which is already riddled with stress and doubt, has become even more stressful and murky.

For people with the capacity for pregnancy, the fall of Roe v. Wade means they have been thrust into a world where their reproductive autonomy is sacrificed for embryos, and the damage is far-reaching. For IVF patients, their future is clouded with uncertainty, further financial burden, lower chances of success, and a higher risk of complications. The baby that would make it all worth it in the end is further out of reach.

Why anti-abortion laws can affect IVF

An IVF cycle starts by inducing ovulation, so doctors can collect multiple eggs. The harvested eggs are fertilized in a lab, resulting in multiple embryos. The embryos are sometimes tested for genetic abnormalities, with doctors only keeping and storing the viable embryos, and discarding the rest. One or more viable embryos are transferred into the uterus.

Since this process is heavily centered on embryo creation and disposal, anti-abortion laws are especially concerning for the IVF community.

“It could lead to limits being placed on how many eggs can be fertilized, whether embryos can be frozen, genetically tested, and the disposition of embryos if an individual or couple decides they no longer need to use the embryos to conceive or build a family,” said Dr. Lucky Sekhon, board-certified OB-GYN, Reproductive Endocrinologist, and Infertility specialist at RMA of New York.

Sean Tipton, chief advocacy and policy officer for the American Society for Reproductive Medicine (ASRM), said the concern is less that the laws are going to overtly restrict or prohibit IVF procedures, but that it might happen accidentally.

Thirteen states have passed “trigger” laws that outright ban or severely inhibit abortion care. Because Roe v. Wade was passed before the advent of assisted reproductive technology (ART), many of these laws don’t account for IVF, but their wording may still have inadvertent implications.

Most of the laws define pregnancy as the condition of having a developing fetus in the body or uterus, therefore excluding IVF (before transfer) from their effects. As a result, IVF is legal in all 50 states at the time of this writing.

“In 49 of those 50 states, patients have complete dispositional control over their tissues,” Tipton said.

The exception is Louisiana, where embryos cannot be discarded, so IVF patients need to store them long-term.

How states are affected

Louisiana offers a glimpse of how IVF could change. Indefinite embryo storage means indefinite storage costs, and if parameters are placed on how many embryos can be created and stored, the process could become slower and costlier.

With one cycle of IVF with medication costing upward of $20,000 in the United States, people who are uninsured or are already struggling to pay for fertility care “may be further pushed out of accessing the care they need to build their family,” Karla Torres, senior human rights counsel at the Center for Reproductive Rights, said.

While IVF is legal in all states for now, the ASRM warns that Utah’s “trigger” law could impact ART because it defines abortion as any “intentional killing or attempted killing of a live unborn child,” and doesn’t explicitly state that it needs to be in utero. In this statute, the term “live unborn child” is not defined, meaning one could argue that embryos constitute unborn children, and that their disposal constitutes abortion. Any “abortion” under this definition is classed as a second-degree felony, and physicians may be reported.

Tipton said that while it’s unlikely Utah will read it that way, the law’s vagueness is a problem. And the unfortunate kicker is that other states may follow Utah’s lead but make the law explicit.

“I think we’re in for a prolonged period of uncertainty,” Tipton said.

The fall of Roe has opened the door for “personhood” laws. If, in the future, “personhood” is granted to embryos, whether intentionally or not, IVF processes could be hindered by prioritizing embryos over patient care. Patients’ decisions about their embryos—including freezing, thawing, genetic testing, and transfer—will be compromised, doctors will be unable to provide patient-centered care, and criminal liability could be imposed on both doctors and patients for potentially jeopardizing embryo safety.

The uncertainty over the likelihood of these effects makes an already stressful medical process even more taxing.

“Struggling with infertility takes a mental health burden, and undergoing fertility care in hopes of becoming pregnant is, for many, a stressful experience,” Torres said. “The concerns felt by both fertility providers and patients across the country after Roe was overruled only compounds that stress.”

Sekhon added that “IVF is not a sprint, it is a marathon.”

“It often takes months of preparation and treatment,” Sekhon said. “At baseline, facing infertility and needing treatment is daunting and stressful. Doing it in a climate of uncertainty and fear makes it incredibly difficult.”

The health risks of IVF after ‘Roe’

“Hospitals and care teams that now have to think twice and ask themselves, ‘Can what I am doing be misconstrued as breaking the new law?’ in the midst of a rapidly unfolding emergency may lose critical time and opportunity to effectively handle emergencies,” Sekhon said. “There is no question that patients will suffer. People will die who, in a pre-Roe-being-overturned-era, would have had access to timely life-saving care.”

“If limitations are posed on embryo freezing, clinics may start to resort to using more than one embryo in situations where they normally wouldn’t, leading to higher rates of complicated pregnancy due to twins and triplets,” Sekhon added.

The maternal mortality rate and the perinatal mortality rate are both higher in multiple pregnancies, and for people of color undergoing fertility treatment, the outlook is even more grim. According to the Centers for Disease Control and Prevention, “in 2020, the maternal mortality rate for non-Hispanic Black women was 55.3 deaths per 100,000 live births, 2.9 times the rate for non-Hispanic white women” in the United States. Such unfavorable likelihoods for Black women make IVF already more dangerous, but the inability to access safe interventions after transfer provides no alternative.

IVF’s inherently higher risk of multiple pregnancies increases the chances of miscarriage, stillbirth, premature delivery, preeclampsia, and placental abruption (a potentially fatal condition where the placenta detaches from the uterus). A multifetal pregnancy reduction allows the pregnancy to continue safely by removing one or more fetuses from the uterus. Anti-abortion laws apply to multifetal pregnancy reduction, leaving the pregnant parent to carry life-threatening and potentially non-viable fetuses to term.

IVF babies account for 1 million of all babies born in the United States between 1987 and 2015, and the annual number of infants born conceived using ART is increasing. In 2008, 61,396 babies were born thanks to ART, and that figure grew to 78,052 in 2017. Millions of families are impacted by IVF, and if anti-abortion laws make it less efficient and more expensive, they’ll be left out of this life-changing treatment.

On what the public can do to advocate for safe and effective reproductive health care, Tipton said patients need to be vocal and question legislators and electoral candidates in elections.

“Everybody who cares ought to go to candidate forums and ask them there where they stand on access to reproductive health care—abortion and IVF,” Tipton said. He added that voting based on what is learned at public forums will be key to protecting reproductive choice.

IVF has always had uncertain outcomes. It’s always been stressful, and not every cycle will end with a baby in your arms. It’s always been a grueling marathon, but it’s always been on the patient’s terms. It has never been something to think about in voting season. Now it is. Now it’s bigger than doctors, their patients, the families they’re trying so hard to build. And it shouldn’t be.