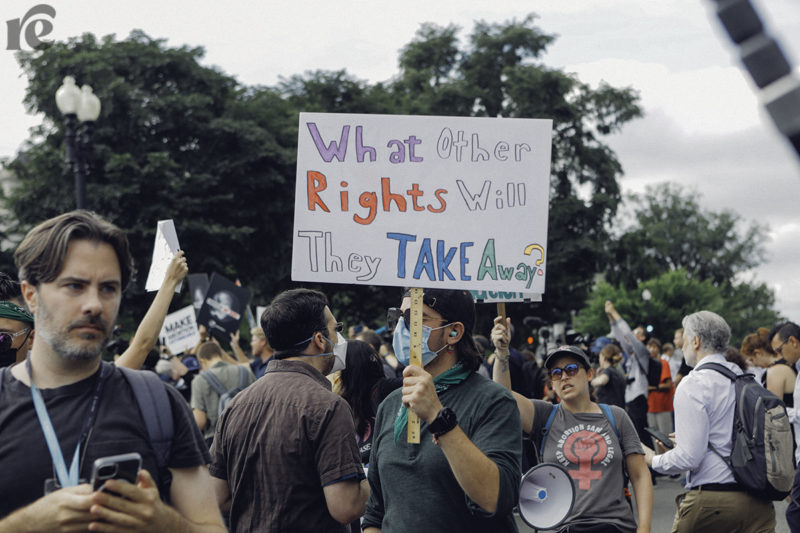 This was just the final nail in the coffin the right had been building around abortion for decades. Austen Risolvato/Rewire News Group

For more coverage of the end of Roe v. Wade, check out our special report.

“What was it like when Roe v. Wade was overturned?”

It’s the first question every reporter asks me. They all want to hear the trauma of that moment. How the patients reacted when they were told they needed to go home, that abortion was no longer available in Alabama, that they needed to leave the state if they wanted to still express their legal right to terminate their pregnancies. How hard would this be for them.

And the inevitable: “Will any of those patients talk to the press?”

They want to know what my staff did first. Did they cry before the pregnant patients finally left the clinic, or did they manage to wait until they were gone? How long did we wait before canceling all appointments? How many were there? What will the clinic be doing to assist them with leaving the state? Were the patients upset? What did they say to your staff?

“Will any of those patients talk to the press?”

I try to explain this isn’t just one moment in time. This very public, very emotional, very “defining” moment looks like a flipped switch to someone on the outside. They can point to the exact moment that Roe v. Wade was overturned and abortion ended in Alabama. It is a stark division—legal abortion at 9:10 a.m. CT, legal abortion gone at 9:11. It’s burned into my brain just as clearly as it is etched into the video clip of the live interview I was giving at the time, memorializing the very second I learned about the decision, when I told the anchor Roe was gone, when I announced I had to go immediately to tell my staff.

It ended with two texts from someone I’d asked to tell me as soon as something happened, so I wouldn’t need to watch the decision feeds. The first one said “FUCK.” The second, “STOP.”

But this was just the final nail in the coffin the right had been building around abortion for decades. When reporters ask if we are worried about scrutiny in a post-Roe landscape, I laugh. We have been under the tightest of surveillance for years. We have been ruthlessly scrutinized for decades. Three days before the end of Roe, we were being visited by the state health department to follow up on a complaint it said it received. A month before that we were investigated and cleared by the environmental department. We know that every eye is on us.

We know that we’ve been one step from closure for years. We know that the state would prefer nothing more than to see us disappear, all because we perform abortions. We think they probably still feel the same even now that we have stopped.

Legal abortion was already extremely difficult to get in Alabama. Now it is impossible. But the difference between those two aren’t nearly as far apart as you might expect. Reporters want to write this as a story of a complete change in abortion access in Alabama, when it’s actually just another point in the story of its decline. Last Friday was much worse than the day before, and this week has been worse still. But it isn’t an end point. Abortion will still be in Alabama. There are too many people who can’t leave the state. Too many people who don’t want to stay pregnant. Too many people who will do it themselves.

“Will any of them talk to the press?” The reporters will keep asking. Because things really won’t change that much at all.

We will finish following up with the abortion patients on our books, the ones who will have to go to Atlanta, or Florida, or Washington, D.C. We will be inserting IUDs. We will be prescribing pills. We will be seeing patients for HIV prevention services. It will be far fewer than normal, but we will do it willingly and happily and under the ongoing and intense scrutiny of a state that is hoping we will make a mistake because the end of abortion in Alabama doesn’t mean they no longer want to shut us down. And we will keep doing this, because we’ve worked under this type of surveillance before. And we know Alabamians need us just as much for this as they did for getting abortions. And we are going to do it all without showing anyone that, inside, our hearts are literally shredded to pieces over all the things we cannot do.

And most of all, we will keep answering our phones. We will keep telling people that abortion is no longer available in Alabama. We will tell them that they have to leave the state. That this has just gotten so very much harder for them. And that if they are forced to remain pregnant and need help there as well, we are there for them, too.

And no, I am not going to ask any of them to talk to the press.