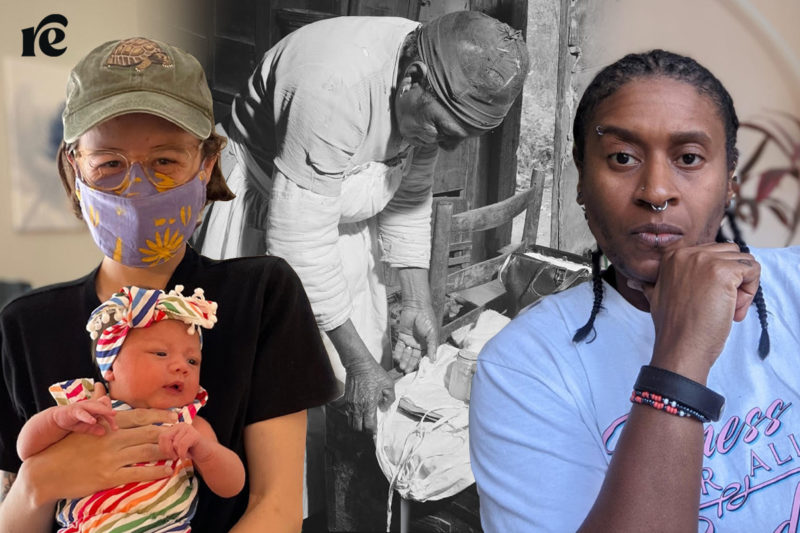 "What really sets queer-centered doula work apart is that there’s space for people to be who they are and ask for what they need,” Jenna “JB” Brown said. “When we center queer and trans experiences, we make space for everybody’s experiences.” Courtesy photos/Library of Congress/Rewire News Group illustration

Jenna “JB” Brown said they first became inspired to enter the field of birth work after they got an abortion as a young trans person. The experience opened their eyes to the lack of safe accessibility queer people are afforded in medical spaces. Soon after, Brown began informally supporting other queer community members trying to access reproductive health care like abortions—but they still didn’t have the language to fully describe their work.

Several years later, Brown finally found a word to describe the role they had begun to fill: doula. In September 2016, they launched Love Over Fear Wellness and Birth based out of Austin, Texas. Today they are regarded as a prominent queer-centered doula in the community.

“Everyone deserves to be treated in a way that recognizes them as a whole person when they’re moving through such an embodied experience that has such massive impacts … on their sense of self,” Brown said.

“What really sets queer-centered doula work apart is that there’s space for people to be who they are and ask for what they need,” they said. “When we center queer and trans experiences, we make space for everybody’s experiences.”

Queer-centered doulas like Moss Froom, a Baltimore-based doula and educator, are stepping in to fill the gaps left by the medical system. From said they are excited to see more birth workers adapting their practices to be intentionally queer-inclusive. Both Froom and Brown offer training programs for health-care providers that provide practical guidance on making these improvements.

“The big difference is just not assuming things about people,” Froom said. “Simply ask them, so that you can support them in the ways that they find most supportive.”

Trans adults report higher rates of discrimination from health-care providers. A 2021 survey from the Center for American Progress found that in the year prior, nearly one out of every two trans respondents—including 68 percent of trans respondents of color—reported experiencing mistreatment by health providers. In particular, respondents described being refused care, misgendered, and even being verbally and physically abused.

Many of the doulas leading the push for queer-centered care attest to how their own negative health-care experiences have shaped their career paths. Nonbinary birth worker and educator king yaa has given birth to three humans, and they recalled the trauma of being met with providers who “didn’t know what to do with me.”

Receptionists would overlook them in the waiting room, they said. Nurses would leave the door open, “like I’m going to jump over the desk and do something to them.” Doctors would ask insensitive questions while performing sensitive procedures.

“My legs are open, you’re inside of me, and you’re asking me invasive questions at the same time,” they said.

After their experience with traditional health-care providers, king yaa decided to become a birth worker themself. On top of providing full-spectrum doula care, they also offer a variety of training courses with the goal of centering queer wellness “as a form of resistance.”

“People believe they can care for everybody. They believe they do not discriminate,” they said. “But I’m still hearing stories. It is still happening.”

Kate York, a queer full-spectrum doula based in the Detroit area, expressed their frustration with the lack of affirming medical spaces in their area.

“There’s nowhere safe I can really refer my clients who are trans, honestly,” York said.

Some doula practices use promotional language pledging to guarantee the safety of their clients, York said. Unfortunately, they said, no doula can completely guarantee their client’s safety, particularly when operating within the confines of a hostile medical system.

“The reality is, we live in a system that’s very unpredictable, and the scales are balanced in one specific place,” York said. “As your doula, I may not be able to do anything in a few certain circumstances except be there for you, witness what’s happening, validate how you’re feeling, take notes, start recording.”

Returning to the roots of birth work

Modern doulas are quick to give credit to Black and Indigenous communities for cultivating the holistic, patient-focused principles that distinguish the queer-centered doula model.

“I think the values and individualized care we provide is a lot more similar to what the original intent of doula care looked like,” said Ama Warnock, a Chicago-based doula. “Doula care really stems from Black and Indigenous community-based practices and has since been taken over by white heteronormative capitalism.”

The practice of birth work within the African American community dates back to the 17th century, when Europeans shipped enslaved African women to the United States to birth the children of slaves.

African midwives did much more than attend labor and delivery, Warnock said. They were traditionally regarded as maternal counselors and spiritual healers. Midwives would assist expecting parents through the entire pregnancy to postpartum journey, providing guidance through new experiences like breastfeeding and sleep schedules.

These midwives continued their work in rural Southern communities well into the mid-20th century, often for minimal compensation. Warnock said it’s important to recognize the role of these women in shaping modern community-based care models.

“When we divest from the doula industry being centered on white ideals,” Warnock said, “it fundamentally changes the way doulas provide care and the ways we care for ourselves—divesting from hustle culture and being able to set up boundaries, rely on community, actually utilize and practice mutual aid.”

Warnock described how the modern medical industry often rewards doulas for sacrificing quality of care in favor of hustling and “girl-bossing” through the birthing journey. Doulas operating within this system sometimes only have time to meet with their clients once before attending labor, Warnock said, making it incredibly difficult to build client trust.

Queer-centered doula care exists outside of this oppressive space, Warnock said. They themself do not put a cap on how many prenatal appointments one client may book leading up to labor. They also operate on an anti-oppressive pay structure using a sliding scale and with the option for bartering. When it comes to providing queer-centered care, “it’s really about whatever the person needs.”

Froom, the Baltimore-based doula, said another way queer-centered doulas seek to make birthing care more accessible is by offering virtual support whenever possible. Especially for people who are trans and queer, they said, it can be hard to find support nearby that fits the person’s needs.

Froom and others also offer various virtual trainings and workshops for health-care providers. These courses aim to give providers the tools to ensure their practices are safe for everyone seeking care.

While the queer-centered model of doula care is still relatively young, it’s gaining traction across the country. The mainstream doula world is still a highly regulated and gendered space, Froom said, but more queer people are joining the profession than ever before—and they’re making a difference.

“It’s a process,” they said. “It’s happening. But like most things, it’s happening more slowly than would be ideal.”

Warnock also spoke to the emerging queer leadership within the doula world, which includes more birth work trainers and educators. They expressed their excitement in seeing a return to community-based care in the profession.

“I think queer-centered doula care is the future,” they said.