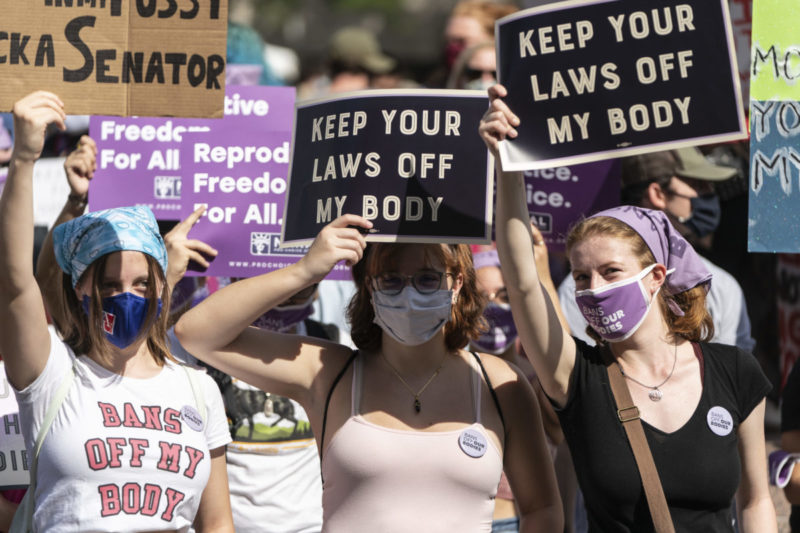 Advocates say HB 989 will turn judicial bypass in Louisiana into an adversarial process that will be even more onerous and traumatic than it already is. Joshua Roberts/Getty Images

For more on teen rights, check out of Special Edition.

Last week, Louisiana lawmakers introduced a bill that would create the most restrictive judicial bypass system in the country, putting abortion care out of reach for minors in a state where access already hangs by a thread—and possibly setting up the next big abortion rights fight at the Supreme Court.

“Accessing an abortion in Louisiana is extremely difficult for anyone, but for young people who cannot involve their parents, it is almost impossible,” said Michelle Erenberg, executive director of Lift Louisiana.

Over half of U.S. states have laws aimed at restricting young people’s access to abortion. These so-called parental involvement laws require minors to either obtain consent from a parent or notify them that they’re getting an abortion, and half a dozen states require both. While some states include exceptions for rape, incest, and/or the life of the pregnant person, others do not. Every state with a parental involvement law on the books must also offer the option of a judicial bypass, a process by which young people who cannot involve a parent in their abortion decision can ask a judge to grant them permission.

In 2021, Louisiana passed Act 482, which “changed the jurisdiction for minors seeking abortion through judicial bypass,” Erenberg said. “Since that law took effect, only two minors have been able to get a judicial bypass. That’s compared to approximately 20 in previous years.”

“The new provisions are almost too many to even list in this article,” said Erenberg, adding that HB 989 will turn judicial bypass into an adversarial process even more onerous and traumatic than it already is.

If a minor does receive a judicial bypass, HB 989 makes it so that the order expires after ten days.

“The three remaining clinics in Louisiana are overburdened with patients from Louisiana and those from Texas [who are being] barred from care based on that state’s abortion ban,” Erenberg said. “Currently, patients are waiting three weeks or more to get an appointment. With this provision, minors seeking abortion, even with a valid court order, would not be able to get an appointment before the order expired.”

History of the judicial bypass

In Bellotti v. Baird, the Supreme Court ruled in 1979 that no one individual should have total veto power over someone else’s abortion decision—therefore, states with parental involvement laws must give young people a second option if going to a parent isn’t feasible. Thus, the judicial bypass process was born.

Despite its initial framing as a compromise to make parental involvement laws less burdensome, judicial bypass is far from the “easy way out” some conservative lawmakers purport it to be. Statistically speaking, most young people already involve a parent in their abortion decision. In fact, nearly all young people involve a trusted adult, and the younger a teen is, the likelier they are to do so. In other words, for young people who can involve a parent in their abortion decision, these laws are essentially moot.

The requirements of judicial bypass come down hardest on the most marginalized: teens living in rural or underserved areas, teens of color, teens living in homes with abuse or where disclosing a pregnancy could be dangerous, and teens living apart from their parents, such as in foster care. These young people are forced to go through an arduous and often dehumanizing experience where they must argue before a judge that they’re mature enough to make the abortion decision on their own. If the judge finds they’re not, they then have to decide whether it’s in the minor’s best interests to have the abortion.

Advocates say HB 989 is likely a trial balloon, a piece of legislation lawmakers float in hopes it will pass and then be challenged in court. The idea is to create a test case for the courts to change the law by affirming said trial balloon—and in this instance, given the makeup of Louisiana courts and the federal judiciary (not to mention the Supreme Court’s conservative supermajority), uphold Louisiana’s attempt to end judicial bypass entirely.

Before the Court ends its current term in June, the justices will release their decision in Dobbs v. Jackson Women’s Health Organization, which will, at the very least, gut the “undue burden” standard that safeguards access. More likely, though, the decision will reverse Roe v. Wade, opening the floodgates for abortion bans in states across the country. Bills like HB 989 promise to be the new normal: laws that, if allowed to go into effect, flagrantly violate the constitutional principles that protect the right to abortion, as flimsy as they are.

In the fight for abortion rights, parental involvement laws are too often relegated to the sidelines, deprioritized, and stigmatized. And as egregious as HB 989 is, conservative lawmakers know it won’t draw the same attention as six-week bans or other restrictions that all but make abortion illegal. As their likelihood of passing and being affirmed in a court challenge—especially in a judicial system that a conservative president spent four years stacking with anti-choice judges—is high, so too are the chances it will happen under the cover of obscurity, thanks in part to a movement that largely ignores the rights of young people.