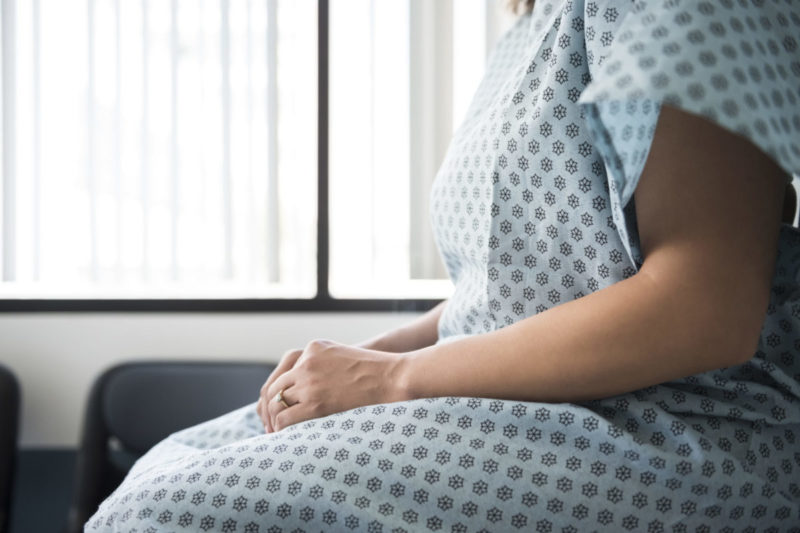 Conversations about abortion are often met with derision in the endometriosis community, creating a toxic culture of judgment for anyone who chooses to terminate a pregnancy while others struggle to get pregnant, as if the two have anything to do with each other. Getty Images

For more on endometriosis, check out our special report.

When a doctor first mentioned endometriosis to me, I went home and Googled the symptoms.

My eyes fixated on “infertility.”

Endometriosis is a chronic illness that occurs when tissue similar to the lining of the uterus grows elsewhere in the body. It can cause excruciating pain, organ damage, and other debilitating symptoms. In the years since my diagnosis, I’ve spent countless hours talking through my fertility, how the surgeries I have to manage my symptoms are done with care to protect my reproductive organs, and on the eventuality of a hysterectomy to treat adenomyosis, which occurs when disease presents in the uterine lining.

If I were to get pregnant now, before I’m ready, I would still have an abortion because I still want the same things for my child and for my life as a mother that I wanted before my diagnosis. But I’d be lying if I didn’t say those calculations in my head involve a fear that I’d be giving up my only shot at having a child—that one day I might regret terminating a pregnancy without knowing it could be my only one.

I also worry about how my body would tolerate an abortion. A few years ago, I had a curettage to restart my menstrual cycle, which essentially means my body went through the latter half of the medical protocol for an induced miscarriage without a pregnancy. What was supposed to be a few days of discomfort turned into some of the worst pain and bleeding I’ve ever experienced; the nausea lasted weeks and, frankly, I never want to go through anything like it again.

Endometriosis affects roughly 1 in 10 people assigned female at birth—that’s millions of people around the world. And we know that approximately 1 in 4 people will have an abortion. So it stands to reason that a large number of people who have abortions also have endometriosis, and yet information about what to expect during an abortion as an endometriosis patient is woefully lacking.

What’s more, conversations about abortion are often met with derision in the endometriosis community, creating a toxic culture of judgment for anyone who chooses to terminate a pregnancy while others struggle to get pregnant, as if the two have anything to do with each other.

So with the help of some members of the endometriosis community and my go-to doctor for all questions about reproductive health, Baltimore-based OB-GYN Dr. Diane Horvath, I put together the guide that I would want should I ever need to end a pregnancy.

What to expect physically

First and foremost: Having an abortion is safe for people with endometriosis.

“If you have endometriosis that is so severe that it changes the anatomy of your pelvic organs,” Horvath said, “then procedural abortion could be theoretically riskier, although I’m not aware of any specific studies that show this.” Severe endometriosis could involve something like your uterus being less mobile because it’s adhered to other pelvic organs, such as your bladder or bowel. If that’s the case, Horvath said it’s a good idea to have that conversation with your health-care provider.

Liz said her endometriosis diagnosis, coupled with what providers told her it meant about her fertility, made her think an unplanned pregnancy was unlikely.

“It was definitely painful, though it felt like a normal period for me, which included not being able to stand up straight and needing to smoke myself into a stoned stupor just to be OK with the pain,” said Erica, 34.

And remember: It’s nothing we can’t handle, but it’s probably still a good idea to discuss pain management with your provider ahead of time.

“If you have endometriosis, I’d strongly recommend talking about your pain control needs with your health-care provider,” Horvath said. “If you’re someone who needs stronger pain medication for your menstrual cramps, it’s totally reasonable to request additional pain control for during and after your abortion.”

Endometriosis often causes irregular cycles, which means you might detect your pregnancy later than someone without endo.

“My cycles weren’t always the same length, so when my period didn’t show up for an extra few weeks, I was thrilled at first,” said Liz, 35, who had an abortion 14 years ago. “I ended up getting my abortion just a few days before I legally wouldn’t have been able to, and it cost more than it would have if I’d done it sooner.”

Liz said her endometriosis diagnosis, coupled with what providers told her it meant about her fertility, made her think an unplanned pregnancy was unlikely.

“I think that there should actually be information given to patients with endo that they can get pregnant,” she said. “In my experience, hearing that you have a medical condition that makes it hard to get pregnant really translates in your brain to, ‘Cool, nothing to worry about.’”

Toward an inclusive future for disabled parenting

Getting pregnant isn’t where this story ends for endometriosis patients, either, despite doctors who make us feel like pregnancy is the be-all and end-all of our existence. Thanks to systemic barriers, ableism, and the everyday challenges of living with chronic pain, parenting with endometriosis is a unique experience as well.

“I do hate the messaging from doctors—and even some in the endometriosis community—that people with endo should try to get pregnant ASAP, and the assumption that any health care we receive has a pregnancy as the end goal,” Liz said.

Being ready to be a parent looks different to me now than before my diagnosis. One of my greatest fears is that I will have children, but my pain will make it hard to be the parent I want to be. And so I know that when the time comes, ensuring I have a support system in place—a supportive partner, family, and loved ones—as well as the financial security to manage my work and home in a way that allows me to take care of my body, will be critical. It’s a lot to navigate, and I know it won’t always be perfect. I also know that it involves an immense amount of privilege.

Disabled people like myself can be fantastic parents. There is nothing about being disabled that precludes someone from parenting or being worthy of having a child. Disability and parenting, like disability and reproductive autonomy more broadly, is riddled with economic, physical, and societal barriers—none of which have anything to do with disabled people’s capacity to parent. Especially when we live in a country where parenting without proper support and stability can compound the already crushing marginalization of disability in a society that still clings to eugenicist beliefs and practices.

And the idea that endometriosis patients endure the judgment of providers and others in the community regarding their pregnancy decisions is abhorrent. Expecting an endometriosis patient to get pregnant simply to “cure” their disease, or treating pregnancy like it’s something to check off the list of things to do that give our life meaning before it’s too late, is reprehensible.

Infertility is an incredibly nuanced and deeply personal thing to experience—as is endometriosis. We live in a world where our reproductive capabilities are directly tied to our worth, and having a disability that directly impacts our reproductive health is a deeply fraught and emotional experience that everyone works through in their own way.

So it’s natural for our abortion decisions to look and feel a little different, even if the eventual outcome is the same. And acknowledging that abortion can involve complex and varied emotions for folks at a higher risk for infertility does not concede that abortion is something people with endometriosis largely regret or struggle with but rather illustrates how critical it is for people to make these decisions without intervention, judgment, or hindrance.

The reality of infertility is also seemingly unavoidable when you have endometriosis. You’re either talking with your doctor about preserving your fertility or facing invasive questions from people who ask when you’re having a baby and having partners question your value for long-term relationships based on your reproductive capabilities.

Sometimes it feels like the only person who doesn’t have a say in whether you have children is you. On the one hand, people will tell you that endometriosis is everything but a death sentence for your fertility—it’s not. On the other hand, you’ll be told to get pregnant as soon as possible because pregnancy can cure endometriosis—it can’t.

Liz is now happily married and trying to get pregnant again.

“It isn’t happening for me as quickly as I’d like, and I’ll be frank—it’s devastating,” she said. “I don’t regret the abortion at all. Literally everything about my life would have been worse if I hadn’t gotten it. But I think if I had been more aware of the actual impacts of endo, I would have hesitated more.” Still, Liz said she’s buoyed by the knowledge that she was able to get pregnant once—and that it could happen again.

Erica wonders whether fertility care and abortion care should be more intertwined for endometriosis patients, who are often referred to fertility specialists. It would be helpful for those doctors to have expertise on what terminating a pregnancy looks like for us, just like the expertise they have on what getting pregnant might look like.

“I believe abortion can hold a different significance to people with endo, but it doesn’t have to,” Erica said. “My chances of ever having a child now are much smaller because of the havoc endo wreaked on my body. But I know for a fact that if I got pregnant tomorrow, I’d have another abortion.”

“I’m 99 percent sure I don’t want children, and I’m willing to take the risk of changing my mind, but ‘missing the boat’ because of my endo—I’m OK with that risk,” Erica added. “But that doesn’t mean you are or should be, or [that] anyone else is or should be OK with that risk.”