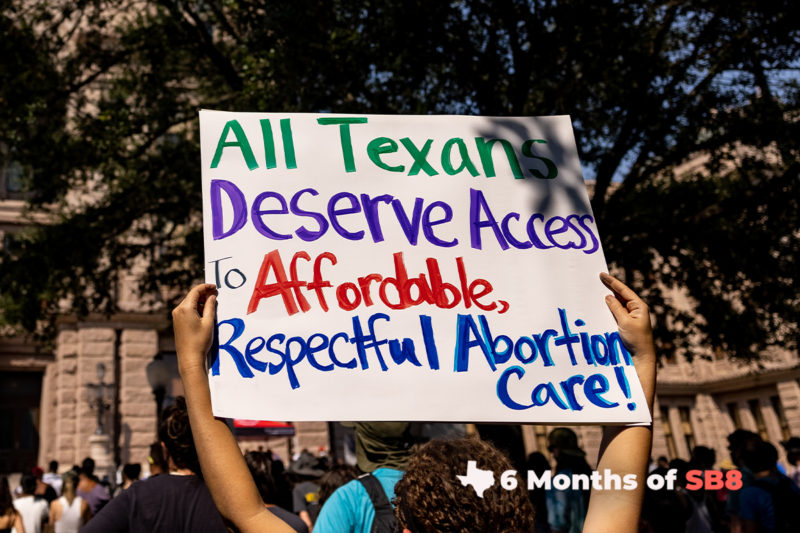 Texas SB 8 has had disastrous effects for Texas families and for providers in surrounding and even far-flung states. Jordan Vonderhaar/Getty Images

This is the third in a three-part series; check out parts one and two.

The atmosphere was both figuratively and literally chilly at the Texas Capitol in June 2013, a testament to both the power of Texas air conditioning and Texans’ righteous anger over renewed attacks on abortion access. Hundreds had descended upon the Capitol Complex, filling overflow rooms and hallways as they waited in line to testify against an omnibus anti-abortion bill that was expected to shutter all but a handful of clinics in the state. Around the country, supporters watched live video feeds and followed live Twitter feeds. They ordered pizzas and cookies delivered to the Capitol, attaching notes of encouragement for the Texans shuddering in sweaters even as the general mood heated up outside.

But when a Republican committee chair tried to shut down a hearing that had stretched into the wee hours, complaining that opposition statements against the bill were getting “repetitive,” things got downright cold.

Simms did come back. So did hundreds, then thousands, of orange-clad Texans over a week that would culminate with then-state Sen. Wendy Davis’ 13-hour filibuster and the legislation’s thrilling but short-lived defeat. Even though the “people’s filibuster” helped defeat the first iteration of the omnibus bill, Gov. Rick Perry brought the legislation back up again in another special session, this time wise to the tactics of what Lieutenant Gov. David Dewhurst had termed the “unruly mob” of abortion supporters. The legislation ultimately passed with the support of longtime legislator and anti-abortion Democrat Eddie Lucio Jr., who stood with Republicans to ensure the abortion restrictions would make it to Perry’s desk for his signature.

The bill banned abortion after 20 weeks, required physicians to have local hospital admitting privileges, mandated that abortion clinics operate as ambulatory surgical centers, and restricted the provision of medication abortion care. Nascent versions of those restrictions had been proposed dozens of times since 1973, but it had taken 40 years after the ruling in Roe v. Wade for them to face a real battle in the Texas Legislature.

Davis’ filibuster made national news—President Barack Obama even tweeted his support for her efforts—but it was the “people’s filibuster,” with Texans from every corner of the state driving into Austin to testify against the bill in the days preceding Davis’ stand, that made it all possible.

Indeed, that summer set a new tone for abortion activism in Texas. Texans didn’t just have a cause, they had a team color—orange—to wear every time they returned to the Capitol to speak out against further restrictions. Lawmakers who rose to prominence during the filibuster became household names; Texans who’d never stepped foot inside their Capitol building learned the ins and outs of parliamentary procedure. Texas abortion funds and abortion rights supporters launched new coalitions and campaigns to support abortion access within and without the Texas Legislature. And many young Texans who’d testified and organized in 2013 went on to build careers in the reproductive health, rights, and justice movements.

But Texas lawmakers continued to pursue further abortion restrictions while challenges to the 2013 law made their way to and through the U.S. Supreme Court. Wendy Davis and Leticia Van de Putte—the latter of whose parliamentary inquiry about not being recognized to speak kicked off the 15-minute roar that cemented Democrats’ victory over the omnibus bill—went on to run for governor and lieutenant governor, respectively, in the next election, but both lost to Republicans (Davis to Attorney General Greg Abbott and Van de Putte to Dan Patrick, who’d championed the omnibus bill as a state senator). It certainly didn’t help that Texas Republicans were attacking voting access even as they were busy rolling back reproductive rights. The state GOP teed itself up with racist gerrymandering efforts and new voter ID laws that made it easier for right-wing lawmakers to take and hold key districts and offices.

There seemed to be plenty of reproductive rights left to regulate, despite the Supreme Court’s 2016 ruling against Texas in Whole Woman’s Health v. Hellerstedt, the case that challenged parts of HB 2, the House version of the Texas Senate bill that led to the 2013 filibuster. Anti-abortion lawmakers in Texas proposed nearly 90 abortion restrictions across the 2015 and 2017 legislative sessions, overshadowing activists’ attempts to improve abortion rights and access in the state as Donald Trump made his way to the White House, all the while stoking the fires of white patriarchal rage and resentment.

It would be a difficult fight to win even for a newly energized movement; it would become almost impossible once Texas’ anti-abortion lawmakers knew they had a Trump-stacked anti-abortion Supreme Court prepared to legitimize their efforts, however unconstitutional.

Abortion in the Trump and insurrection era

Seven new abortion regulations—many reminiscent of proposals from the ’70s and ’80s—passed in 2015 and 2017, including restrictions on insurance coverage and tighter rules for young people seeking judicial bypass, as well as stricter requirements for data collection and the disposal of fetal tissue. In 2019, two more anti-abortion bills: one creating civil and criminal penalties for providers who violate so-called born-alive provisions based on long-debunked lies and propaganda, and another banning public entities from doing business with abortion providers or affiliates.

Somewhere along this Trumpy line, Texas abortion restrictions became something more than prohibitive; they became retaliatory and even vindictive. Republican lawmakers introduced bans that didn’t just criminalize abortion wholesale but that would allow prosecutors to charge people who have abortions with homicide, a crime punishable by death. It was, at the time, an unprecedented step forward in mainstream abortion legislation in an area where anti-abortion lawmakers had already been pushing the envelope for decades.

At the same time, where Texas lawmakers had been unable to pass statewide protections for abortion rights, some municipalities stepped up. Austin passed city-sponsored funding for abortion access; the legislature’s earlier ban on public entities doing business with abortion providers, affiliates, or supporters appeared to specifically target the city’s longtime lease with a local Planned Parenthood clinic. But there was a flip side, too: Other Texas municipalities began proposing abortion ordinances banning and criminalizing care within city limits, though not always successfully.

But at the very moment that supporters of abortion rights and access were figuring out new, creative ways to expand and protect reproductive freedom despite everything they were up against, the Texas Legislature emerged with a trump card (if not a Trump card) in 2021. Lawmakers proposed more than six dozen restrictions on abortion care, including another death penalty bill, but one would rule them all: SB 8, a six-week abortion ban with a bounty-style bonus. The law allows any private citizen anywhere to sue providers and others who “aid or abet” an abortion for $10,000 or more.

A week ago, Texas SB 8 crossed the six-month mark of being in effect. It’s had disastrous effects for Texas families and for providers in surrounding and even far-flung states who are now tasked with providing care to Texans who can no longer access abortion where they live. Despite challenges, the Supreme Court has allowed the law to be enforced while also saying it must remain so because the Court doesn’t really know who’s supposed to enforce it, thanks to the civil action provisions that allow just anyone to sue for damages.

Now along with Mississippi’s Dobbs v. Jackson Women’s Health Organization—an explicit challenge to Roe v. Wade that’s awaiting a ruling from the Supreme Court—the country is facing the most significant challenges to legalized, clinical abortion care that it’s ever seen nearly 50 years after that historic decision.

If you’ve stuck with this series thus far, it might be hard to feel anything but despair at the current status of abortion rights. I don’t precisely feel great after digging up the history of abortion legislation in Texas. But there’s also so much that is happening, and has already happened, around organizing efforts in support of abortion rights and access in Texas, which have gone beyond—and persevered—despite the Texas Legislature, long known to be influenced by and beholden to the whims of too many political winds.

I am struck most by how so much of the way abortion regulations have come to be (or not) in Texas can be attributed to the political power of just a handful of people who, I think, have never really reflected the views of average Texans. Over the last 50 or so years, several men (and a few women) have done most of the driving when it comes to how our abortion politics look today, and some of those folks aren’t even Texans—they’re Supreme Court justices. For example, Texans in general—even most Republicans—don’t support the six-week abortion ban.

A number of factors have affected Texas abortion supporters’ ability to claim or reclaim enough power in the state to pursue protections for and expansions of abortion rights and access, and I don’t mean to discount them here. Republican gerrymandering and the GOP’s dogged dedication to disenfranchising voters of color and repealing voting rights have undoubtedly prevented the full democratic and capital-D Democratic representation of Texans’ values and political will, particularly on subjects such as abortion.

And Texas is not unique in its pursuit of abortion restrictions. Lawmakers across the country have proposed and passed more abortion restrictions in the last decade or so than in the first 30 years following Roe v. Wade. I think we can attribute a great deal, if not absolutely every last bit, of the current zeitgeist to white supremacy, patriarchy, and bare power grabs by people who believe that justice for all is an injustice to the most powerful among us.

I know this because I know supporters of abortion rights and access have dreaded this day for decades. I know that we have long warned our “pro-choice” lawmakers that playing the politics of compromise with abortion restrictions would get us nowhere but here, even as some of the most powerful reproductive rights organizers and organizations have discounted and eschewed calls for racial justice and gender inclusivity in this work. I also know that networks now exist to help people access safe abortion care outside of a clinical setting—and that the conflation of “safe” abortion with “legal” abortion is on the way out, thanks to new advancements in medicine and technology.

The past is already written, but the future is full of possibility, even in a state that never became the safe haven for abortion care that opponents feared decades ago. We do not live in 1973, nor do we need to live with the same old fears and prejudices of 1973. Federal protections for reproductive freedom seem to finally be gaining ground, perhaps too late—or maybe just in time to rebuild on our own terms after Roe, with stronger protections and better expansions on reproductive health, rights, and justice in the decades to come.

For more Texas SB 8 coverage, check out our special report.