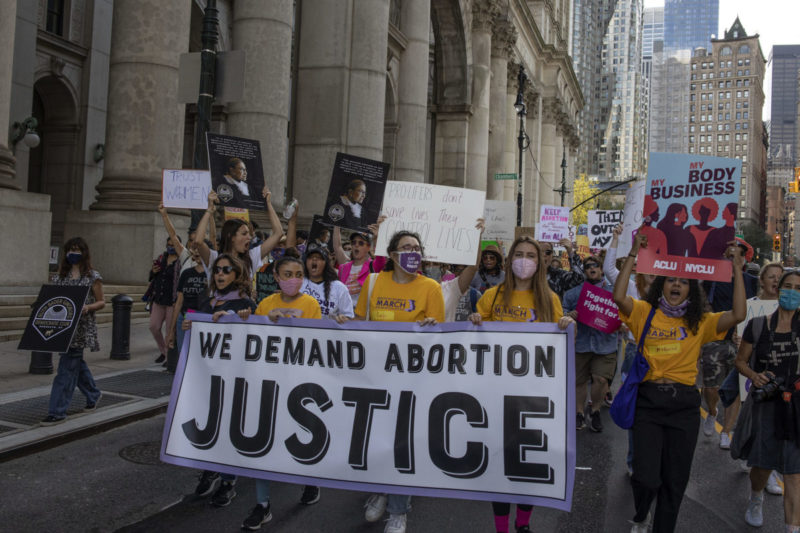 It's time to give up the abortion politics of avoidance and embrace the politics of advocacy, agency, and affirmative support for expanding reproductive freedom. Andrew Lichtenstein/Corbis via Getty Images

Now that Texas’ six-week abortion ban—in place for over 100 days—and the Mississippi 15-week ban directly aimed at overturning Roe v. Wade have made their way to a roundly anti-abortion Supreme Court, we’ve seen a flurry of “told you so” roundups and exasperated reminders from feminist thinkers, legal scholars, and reproductive health, rights, and justice advocates who’ve raised countless yellow, orange, and flaming red flags over the years, warning that this day would inevitably come.

We are looking at the likely end of Roe’s protections in a matter of months, but this isn’t even the first time in recent memory that we’ve told-you-so’d after having told you that the end is nigh, only to have our clear-eyed analyses and urgent calls for change derided as fearmongering, hysterics, and overreaction—merely for, in some cases, taking anti-abortion politicians at their word.

Warnings about the tenuousness of Roe go back decades, practically to the moment the Supreme Court decided the case in 1973. It began in earnest in 1976 with the advent of the Hyde Amendment, which blocks people enrolled in Medicaid from using their insurance for abortion care. By the time Henry Hyde, a Republican from Illinois, was whining that he only had the means to block abortion access for poor women, Black women had long been speaking out against disparities in access to care. But the Supreme Court upheld Hyde, presaging what would become decades of chipping away at Roe, almost always at the expense of low-income families and pregnant people of color.

It would be 45 years before there was enough political momentum on the mainstream left to leave the Hyde Amendment out of the Senate’s proposed federal budget. And by “45 years,” I mean that until literally two months ago, the country’s highest profile Democrats felt that blocking abortion access for low-income folks was a good and reasonable compromise with Republicans on abortion.

To be clear: during the very same time—like literally on overlapping calendar days—that abortion has been effectively banned in Texas, a state with nearly 30 million residents, and while there is one single clinic providing abortion care in Mississippi, the most powerful people on the American left have been concerned that letting low-income folks use their Medicaid insurance for the full spectrum of reproductive health services might really go too far in support of abortion.

This inevitability does not make decades of “we told you so” any more satisfying for those of us who’ve been ignored, mocked, and derided as over-emotional harpies—not just by Republicans gaslight us, but by our own ostensible allies on the allegedly “pro-choice” left. “We told you so” doesn’t get people abortions.

The nearly 50-year journey to overturning Roe hasn’t been a straight line; there are too many things that happened along the way to cast responsibility for our current situation squarely in any one place, or even a handful of places. Of course we can blame the anti-abortion movement and the Republican Party for aggressively pursuing the end of Roe—if they hadn’t doggedly committed themselves to ending the right to abortion, we wouldn’t be where we are. That part’s easy. I’m mad as hell at them, and they don’t care. They’re not the “you” in we told you so.

Whenever members of the reproductive health, rights, and justice movements—along with scholars and journalists and supporters of abortion rights and access—have sounded the alarm about Roe, we have hoped to get through to people positioned to do something about it. We have hoped that this time, we would not be dismissed with “not yet” or “not right now,” or told that the ability to decide if, when, and how to have a family is a “niche” issue, or chastised for making unreasonable demands about not being forced by the government to stay pregnant against our will. We have hoped, and we have usually been disappointed. Sometimes, we have disappointed ourselves.

For the Democratic Party, the rejoinder to calls for action around Roe has usually been “not yet.” It’s not yet time for full-throated support of abortion rights; better stick with “safe, legal, and rare,” and concentrate on building a “big tent” so that anti-abortion Democrats feel welcome, even as women lawmakers of color have long made significant sacrifices to share their own abortion stories and called for the expansion and protection of abortion rights and access. But “not yet” says that the left must make endless compromises on abortion so that, when the time comes to really stand up for abortion, we’ll have the seats and the votes and the voters. Incredibly, it seems the time for this is still “not yet.”

For a reproductive rights movement mostly led by white, cisgender women, the rejoinder is usually “not you.” Not trans people, and not women of color, and not poor folks or young people. Unionization efforts have been quashed and calls for a racial reckoning gone unanswered as leaders have long fixated on maintaining the barest protections for Roe, treating the ruling as the ceiling, rather than the floor, in terms of protections for reproductive freedom.

Codifying Roe v. Wade and protecting the legal right to abortion is the floor. We want the ceiling: ending the Hyde Amendment and ensuring that anyone who seeks abortion care must be able to get it—wherever they live, whoever they are, and however much they earn.

Nationwide, the landscape is grim. Just 15 states have pursued affirmative expansions of and protections for abortion access in the absence of Roe; clinics there are now inundated with people from Texas and elsewhere traveling in search of care, if they can afford to. People in the South and the Midwest are routinely mocked and taunted by our supposedly “pro-choice” peers in abortion-friendly areas who think that, somehow, we can all abandon our homes and families and “just move.” Big, Beltway-centered reproductive advocacy organizations have often hoarded power away from grassroots and state-level advocates fighting on the front lines, even as those national organizations used alarm bells about the end of Roe to raise funds.

Meanwhile, the sheer scope of the efforts the Republican Party and the anti-abortion movement have made to regulate, restrict, and outlaw abortion can hardly be overstated. They have explored and exploited every angle, and even created new ones. They have approached this project with a singular, concerted focus, and ensured that their party’s lawmakers and officials at every level of government are in lockstep opposition to abortion rights and access.

The breadth and depth of these laws is mind-boggling; we’re not talking about a thousand slightly different versions of the same thing. We’re talking about gestational bans, bans on certain abortion procedures, bans on medication abortion, “reason” bans built on sex- and race-selective abortion myths, bans on telemedicine, bans on funding for abortion, bans on care for young people, and bans on insurance coverage for abortion.

We’re also talking about re- and misdirection of funding—denying public dollars for breast exams and cancer screenings if they’re performed by an abortion provider or funneling taxpayer funds to deceptive anti-abortion “crisis pregnancy centers.” And then there are efforts to explicitly criminalize abortion and pregnancy loss: fetal personhood laws, fetal homicide laws, incorporating abortion into criminal homicide statutes or implementing the death penalty for people who have or provide abortion care.

And it’s not just legislative attacks on care. It’s city ordinances and extra-statutory regulations and a messaging machine that churns out ever more grotesque and preposterous lies about abortion care, from the “born alive” myth to fabrications around Planned Parenthood selling “baby parts.”

So you will really have to forgive me if I laugh or cry or both at the assertion that Democrats are on the verge of “overreacting” to the end of Roe and going too far in support of abortion rights, or that now is not the time to go all in on reproductive freedom, lest we show our hand. Hell, the big news in the 2020 Democratic primary was that most—but not all—candidates supported the almost laughably bare-minimum act of codifying Roe’s limited abortion protections into law. My goodness! Nearly 7 million Texans and our families are being denied abortions where we live, today, and I’m expected to believe that the Biden administration is using abortion to “distract” from other issues when the man has hardly said a single fucking thing about it?

It was only two years ago that Joe Biden announced he’d had a revelatory change of heart around the Hyde Amendment! The man has had nearly 50 years to think about it—50 years to ignore and dismiss all those flags raised by reproductive health, rights, and justice advocates.

It would be one thing if Biden’s views were reflective of a general public ambivalent about Roe and the right to abortion, but they aren’t. I’m sympathetic to people whose views on abortion have changed and evolved; I’ve been there myself. But in a moment when it is neither hyperbolic nor hysterical to say that the constitutionally protected right to abortion is facing elimination in a matter of weeks or months, we desperately need leaders who’ve already worked their shit out on the subject.

But here we are. Compromises and concessions have failed. It is time to give up the abortion politics of avoidance and embrace the politics of advocacy, agency, and affirmative support for expanding reproductive freedom.

So we are raising the flags again. We are begging Congress to pass the EACH Act and the Women’s Health Protection Act. We are demanding the repeal of the Hyde Amendment. We are teaching each other about safe self-managed abortion to ensure that coat-hangers and back alleys stay in the past. We are building support systems and legal and funding resources for people who are and will be criminalized and prosecuted for ending their own pregnancies, or experiencing pregnancy loss.

And we are warning that a fight that started over abortion will not stop with it. We do not want to say another “I told you so.”