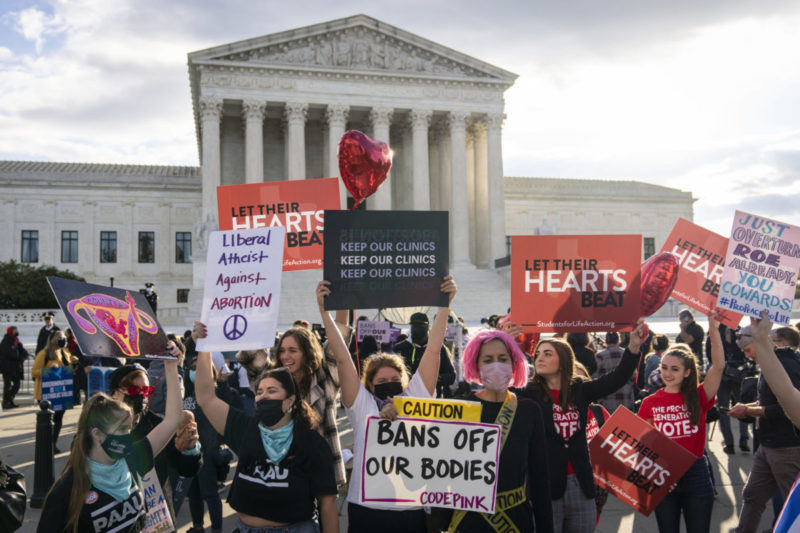 By letting Texas SB 8 take effect, the Supreme Court has effectively telegraphed how the Mississippi case will turn out. Drew Angerer/Getty Images

Scott Stewart, Mississippi’s solicitor general and a former Trump official and law clerk to Supreme Court Justice Clarence Thomas, will stand before the justices on Wednesday and ask them to overturn Roe v. Wade once and for all.

It will be his first Supreme Court oral argument.

In some ways it is simply pitch-perfect that conservatives are sending in Some Random White Guy (TM) to argue the case that could end legal abortion in this country. When conservatives first argued against abortion rights in Roe v. Wade, Jay Floyd, the attorney defending the Texas abortion ban at issue, opened his arguments with a joke: “Mr. Chief Justice and may it please the Court. It’s an old joke, but when a man argues against two beautiful ladies like this, they are going to have the last word.”

It’s hard not to be reminded of Floyd’s opening statement—which has since been called the worst joke in legal history—as we prepare for arguments in Dobbs v. Jackson Women’s Health Organization.

The last time Rikelman argued on behalf of abortion rights at the Supreme Court, she scored a major victory in June Medical Services v. Russo, a case designed to greenlight anti-choice lawmakers’ attempts to hyper-regulate abortion clinics out of existence. And Prelogar was righteously defending abortion rights at the Supreme Court just a few weeks ago in United States v. Texas, the Biden administration’s challenge to Texas’ near-total abortion ban. It’s as if abortion rights supporters have a totally different understanding of the magnitude of this moment, as told by who they’re sending into battle.

What happens if other states are successful in enacting their own versions of SB 8? Where will those patients turn for care?

And let’s not for a moment sugarcoat the magnitude of this moment. It might be easy to lose sight of the fact that Dobbs v. Jackson Women’s Health is the first direct challenge to Roe, now that the Court’s conservative wing gave the functional green light to Texas’ scheme to outsource enforcement of its near-total abortion ban to vigilantes across the country. By letting Texas SB 8 take effect, the Court has effectively telegraphed how this case will turn out. And I wish I could say that it will turn out well.

Should abortion rights advocates win, it will be a tremendous victory indeed. But what does a win like that even mean when, for 89 days and counting, the Supreme Court functionally suspended abortion rights in Texas because the conservative justices could? I don’t want to call it a shallow win, because the consequences of a post-Roe world are just too stark, but when a win means maintaining the current status quo’s patchwork of access, the wins don’t land quite the same.

But if anti-choice advocates win, the effects will be devastating. And the worst part is the Court doesn’t even have to overturn Roe for this to be true. A win for abortion rights opponents in Dobbs v. Jackson Women’s Health will amplify and accelerate the human rights crisis unfolding in Texas thanks to SB 8. Patients already travel to Louisiana from Texas for abortion care. Where will they go when Louisiana’s 15-week ban takes effect? And what happens if other states are successful in enacting their own versions of SB 8? Where will those patients turn for care?

The questions are too many. The answers are too grim. And it’s a reality already unfolding.