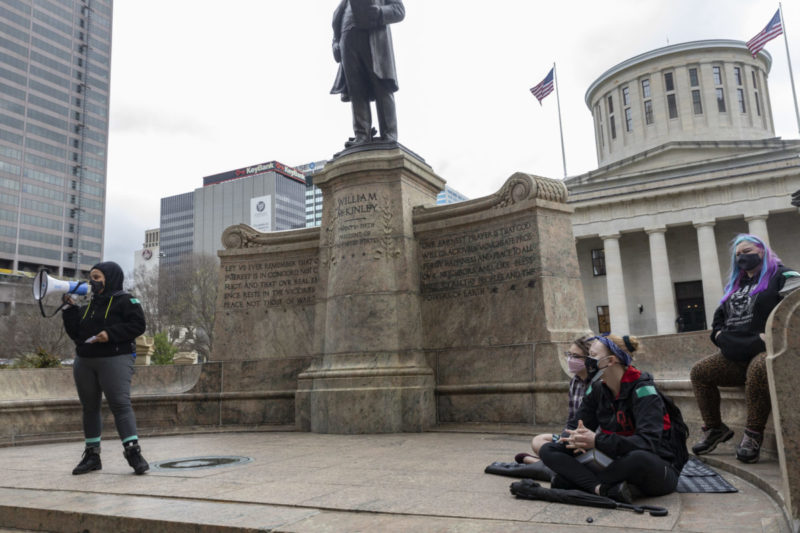 The Ohio Legislature was the first in the country to consider a ban at six weeks, when many people don’t even know they’re pregnant. Stephen Zenner/Getty Images

UPDATE, November 19: The city of London voted against its anti-abortion measure on Thursday night.

Before Texas enacted SB 8, banning at least 80 percent of abortions, about two dozen cities across the state had already attempted to ban abortion within their limits, declaring themselves “sanctuary cities for the unborn.” Now, a similar wave appears poised to sweep Ohio, potentially spelling disaster for abortion access in the region.

On Monday night, the Mason City Council passed an anti-abortion ordinance. According to NARAL Pro-Choice Ohio, people in the audience chanted “Vote them out!”

In late May, the city council in Lebanon, Ohio, voted unanimously to adopt a “sanctuary city for the unborn” ordinance, the first in the state. Krista Wyatt, the lone council member to oppose the law, resigned in protest before the vote.

“There is a core group of people who have hijacked the council to force their personal, political and religious views on the entire citizenship of Lebanon,” she said in a statement. “It is not fair to the citizens and is not the role of a City Council member to be a moral compass.”

The city of London is also considering a similar measure, and the nearby village of South Lebanon passed a resolution in support, though not yet an actual ordinance.

“The point is to scare people, and confuse people, and further stigmatize abortion,” Stephanie Sherwood, executive director of the Ohio abortion fund Women Have Options, told Rewire News Group. “The cruelty is not surprising, but I think it’s just horrifying.”

Ohio is a critical point of abortion access despite its many abortion restrictions, including a ban on most abortions more than 22 weeks from a person’s last menstrual period, mandatory ultrasounds, a 24-hour waiting period, forced parental consent for minors, and limits on medication abortion and insurance coverage of abortion.

Like Texas, Ohio is a state with many anti-abortion “firsts.” In 2011, the Ohio Legislature was the first in the country to consider a ban at six weeks, when many people don’t even know they’re pregnant.

“Ohio is the seventh-most populous state, and after Texas we’re the second-biggest ‘red’ state, depending on whether or not you consider Florida a ‘red’ state,” said Jessie Hill, cooperating attorney with the ACLU of Ohio and professor at the Case Western Reserve University School of Law.

In other words, as Ohio goes, many other states follow. And in addition to the state’s own residents, many people in surrounding states rely on Ohio abortion clinics.

Sherwood said Women Have Options hears from people who are traveling into Ohio for their abortions on a daily basis. Most of Ohio’s major metropolitan areas are close to state borders, making the clinics in those cities the closest option for many people living in surrounding states. This is particularly true for West Virginia and Kentucky, which have just one and two clinics, respectively. Sherwood said their organization also gets callers from Indiana and Pennsylvania, and even as far away as Tennessee and some rural parts of New York.

When “sanctuary city” ordinances began to appear in Texas in 2019, they spread first through smaller municipalities that had no abortion providers. This led many to dismiss them as harmless and symbolic. But they weren’t: In addition to sowing fear and stigma, some of the ordinances declared abortion rights groups “criminal organizations” and prohibited them from operating within city limits. In response to a lawsuit brought by two abortion funds, Texas Equal Access (TEA) Fund and Lilith Fund for Reproductive Equity, seven small East Texas towns amended their ordinances to remove this language.

Then the movement came to Lubbock.

Lubbock, a northwest Texas city of over 250,000, passed a “sanctuary city” ordinance in May. In this case, voters adopted the ordinance after their city council had rejected it unanimously months before. Lubbock did have an abortion provider—a Planned Parenthood health center that had only begun offering abortion services about a month prior. The Lubbock ordinance closely mirrored SB 8, which was nearing passage in the Texas Legislature at the time. Like SB 8, it placed enforcement in the hands of private citizens, giving any citizen of Texas legal standing to sue someone suspected of violating it.

After the ordinance passed, the Planned Parenthood in Lubbock remained open but stopped providing abortions. A few months later, clinics across Texas were forced to stop providing most abortions when SB 8 was allowed to go into effect.

The Lebanon, ordinance prohibits “aiding and abetting” abortion, just like Lubbock’s and SB 8.

“It’s the same folks from Texas who are pushing these ordinances and offering to defend them if they get sued,” Hill said, referring to Mark Lee Dickson, director of East Texas Right to Life and architect of the anti-abortion “sanctuary city” movement. Dickson has provided draft ordinances to Ohio cities and testified in favor of them at city council meetings.

“It’s an incremental strategy. I fully expect these ordinances to spread, and though nothing has been introduced, there’s already been talk in the Ohio state Legislature about the possibility of passing an SB 8-style bill,” Hill added. Ohio is also considering a “trigger law” that would immediately ban abortion if Roe v. Wade were overturned.

Should an SB 8-style state ban take hold in Ohio, it would have devastating effects not just on the region but across the country.

“When I think about the clinics in the closest ‘safer’ states, like New York, Pennsylvania, Michigan, and Illinois, that is just so far away for some people,” Sherwood said. “And those clinics only have so much surge capacity.”

Clinics in Louisiana, Oklahoma, and New Mexico are already stretched by demand from traveling Texas patients. If Ohio clinics were forced to turn patients away, clinics across nearly all of the South and Midwest would be overwhelmed. Many people, especially low income people of color, would likely be unable to travel.

After Lebanon’s ordinance passed, the ACLU of Ohio said in a statement it was prepared to sue, though no legal action has been taken as of yet.

“To the extent that there might be individuals or groups that could be affected by the ‘aiding and abetting’ provisions who might have standing to bring a lawsuit, those options are still on the table,” Hill said. For the time being, the ACLU has placed a billboard in South Lebanon that says, “Abortion is still legal in all of Ohio.”

“We are not going to stop. That’s not an option,” Sherwood said. “We’ve seen the incredible resolve and resiliency of the Texas funds, and we are determined. This is just another thing we’re preparing for.”