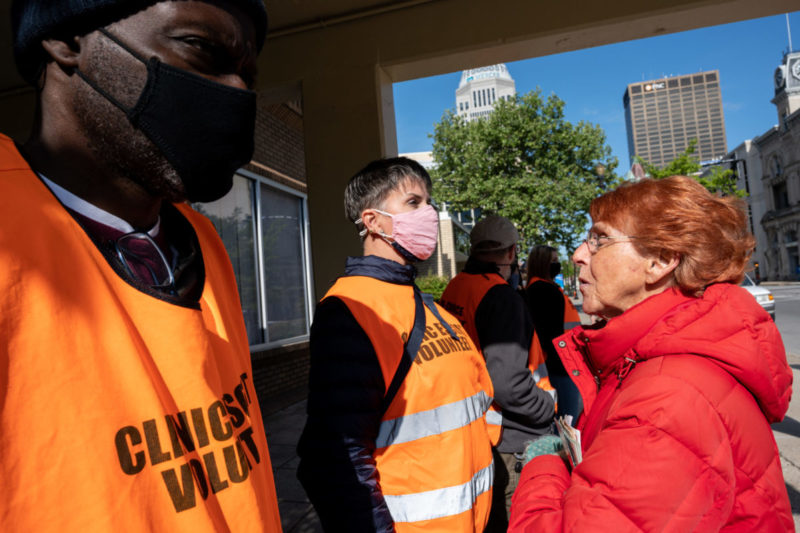 You may know Daniel Cameron as the man who declined to recommend homicide charges for the police officers who killed Breonna Taylor. But Kentucky’s Republican attorney general is also the reason why the Supreme Court will hear an abortion-related case this month, the first abortion-related case in this new term under its 6-3 conservative supermajority. That’s right, the high court has two abortion cases on its docket so far, not just the high-profile Mississippi one in which the state flat-out asked the Court to overturn Roe v. Wade.

The Kentucky case, Cameron v. EMW Women’s Surgical Center, has gotten less attention because the stakes in the Mississippi case are so high and because of the legal chaos in Texas. Moreover, the Court is weighing in on a relatively wonky issue here: whether Cameron can intervene to defend a law after both a district court and an appeals court found it unconstitutional, and after the state’s Democratic administration declined to appeal that decision. The justices are not considering the merits of the anti-abortion law itself.

But don’t let anyone tell you this case is unimportant procedural stuff.

“Even though the legal question doesn’t have to do with abortion, the stakes here are still incredibly high, especially for people in Kentucky,” said Alexa Kolbi-Molinas, senior staff attorney with the American Civil Liberties Union’s Reproductive Freedom Project, who will argue the case on October 12.

The law Cameron wants to defend is a ban on the most common abortion procedure used after 15 weeks of pregnancy, known as dilation and evacuation (D&E). “If the Supreme Court sides with Attorney General Cameron, then he will get to pursue his goal, which is to overturn the underlying decision striking down the abortion ban,” Kolbi-Molinas told Rewire News Group.

If Cameron is able to intervene and the law gets upheld, it could effectively ban abortion after 15 weeks in a state that has just two clinics and multiple restrictions, including a 24-hour waiting period and bans on insurance coverage of the procedure. Both clinics are in downtown Louisville, which means access is limited for people in other areas of the state.

The plaintiff in the case is EMW Women’s Surgical Center, the state’s only independent abortion clinic and the only one that provides care after 14 weeks of pregnancy. Kentucky’s other clinic, a Planned Parenthood health center, was granted a license in January 2020 and offers care through 13 weeks and 6 days, so the D&E ban would not affect it. The Ohio Policy Evaluation Network (OPEN) estimated that EMW provided nearly 90 percent of abortions in the state between March and December 2020, since the clinic provides care more days per week and later in pregnancy.

EMW has been the state’s only clinic for long stretches of time, and it gets targeted by protesters both for that reason and because of its setup, said Meg Sasse Stern, who has been a volunteer clinic escort for more than 20 years. EMW is on a main thoroughfare with no on-site parking for patients, so they have to park elsewhere and walk through the front door, often through a gauntlet of protesters who may try to block their path, grab them, or hand them anti-abortion pamphlets or baby booties, Stern said. An anti-abortion “crisis pregnancy center” right next door offers free parking to EMW patients in an effort to get them inside. In 2017, EMW was the site of the first clinic blockade in almost 15 years, orchestrated by the extremist anti-abortion group Operation Save America. Staff are routinely harassed with threats of harm and hate mail, and, in April 2020, a bomb threat, according to OPEN.

“I cannot ignore the vast difference in treatment received by these anti-abortion protesters and the way that our police department treats protesters that are demanding police stop killing Black and brown people.”
-Meg Sasse Stern, volunteer clinic escort

By contrast, Planned Parenthood’s health center has a parking lot and a privacy fence around the property, Stern said. “The protesters do not have the same kind of access to the patients [at Planned Parenthood],” said Stern, who is also the support fund director for Kentucky Health Justice Network, a reproductive justice nonprofit that pairs abortion patients with a case manager and helps them pay for their procedure, transportation, lodging, childcare, and other expenses. “They see EMW as low-hanging fruit.”

Ona Marshall, who co-owns EMW with her husband Dr. Ernest Marshall, said protesters and state lawmakers are always targeting their clinic, but “I think in general, they just want to abolish abortion and access to abortion, so they go through the series of laws to see what they’ll be able to do.”

In May, the Louisville Metro Council voted to create a safety zone around the clinic entrance, and the 10-foot buffer zone was implemented in mid-September. Marshall said advocates pushed for the safety zone because of the lack of enforcement of various city ordinances regulating things like harassment, noise, and sidewalk access. She also noted that these same ordinances were enforced against social justice protests after Breonna Taylor’s death, and the Louisville Metro Police Department is now under a pattern and practice investigation by the U.S. Department of Justice. LMPD arrested the state’s only Black woman lawmaker, state Rep. Attica Scott, during a September 2020 protest.

Both Marshall and Stern are skeptical that the safety zone around EMW will be enforced due to anti-abortion sentiments in the police department. During an August 2020 Metro Council meeting about the proposed safety zone, former council member David Yates, now a Democratic state senator, said he received text messages from police officers asking, “who’s going to enforce this – lol.”

In February, an off-duty officer parked his LMPD cruiser in front of the clinic and protested for about two hours with a “pray to end abortion” sandwich-board sign over his uniform and his gun visible, Stern said. The department placed the officer on administrative leave while investigating the incident, but he was ultimately not disciplined because LMPD hadn’t been consistently enforcing its protesting policies. LMPD said it would require strict compliance going forward.

Stern said the behavior that LMPD tolerates outside the clinic is a public safety risk. “The environment that exists down there just welcomes this kind of extreme behavior where we get these national extremists,” she said, adding that John Brockhoeft, a convicted clinic arsonist who attended the January 6 insurrection, is a regular at EMW.

Like Stern, Marshall is worried that violent protesters feel empowered. “During the last five years, we have experienced a significant and sustained increase in the types of anti-abortion harassment, and those are the types of harassment that have led to tragic outcomes in other cities, so it is something to really pay attention to,” she said.

But not a lot of people are paying attention to either the protesters or the Supreme Court case. “In general in Kentucky, and probably in other states, I don’t think there’s a high level of knowledge about this case,” Marshall said.

And with many people checked out, Cameron is pursuing this piece of his “concerted strategy” to push abortion access entirely out of reach without much fanfare, Kolbi-Molinas of the ACLU said. When the Supreme Court announced it would take Dobbs v. Jackson Women’s Health Organization, Mississippi’s direct challenge to Roe, this Kentucky case got somewhat overshadowed.

“Not wrongfully, not malice or anything like that—but the legal question isn’t about abortion,” Kolbi-Molinas said. But remember: “There is more than one case on the Supreme Court’s docket this term that implicates abortion access.”