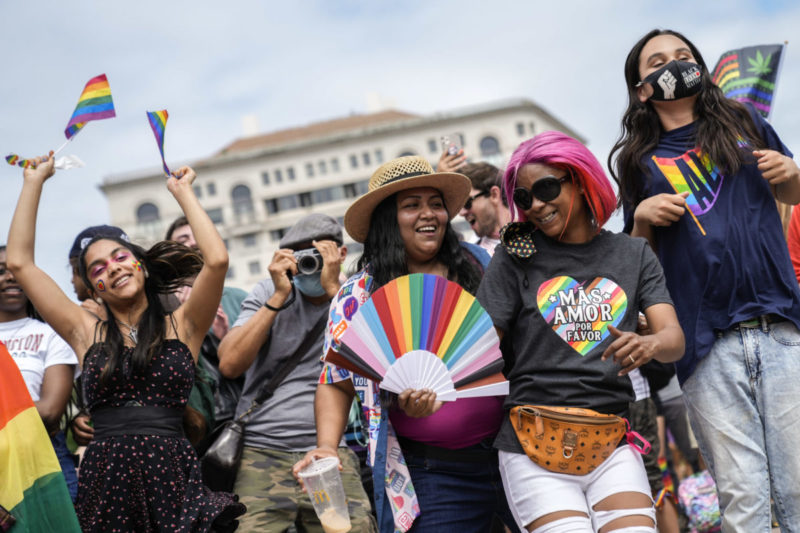 Pride Month is a time to celebrate our collective power as a queer community and the gains we’ve achieved. It’s also a time to reflect on those gains to ensure we never stop working toward equality and justice. This year, especially, that means exposing the far-right lawmakers, activists, and judges who want to roll back our rights at every level.

June holds so many significant anniversaries to honor—from the revolutionary Stonewall uprising to major Supreme Court decisions like Lawrence v. Texas and Obergefell v. Hodges. Because of these cases, lawmakers can no longer criminalize same-sex relationships or ban same-sex marriage. And because of Stonewall’s legacy, our community came together to tell those in power that we have more strength, resilience, and unity than they can ever legislate away.

Despite this, in the midst of Pride season we’re reminded just how hostile this current Supreme Court makeup is to our most fundamental freedoms. The Court’s ruling Thursday in Fulton v. City of Philadelphia opened the door for widespread discrimination against LGBTQ folks by cementing a constitutional right to discriminate if that discrimination is in the name of religious belief.

And now we are faced with a Supreme Court case that threatens LGBTQ communities’ reproductive freedom and the right to privacy affirmed by Lawrence and Obergefell. Dobbs v. Jackson Women’s Health Organization is a case regarding Mississippi’s 15-week abortion ban that directly challenges Roe v. Wade, which recognizes the legal right to abortion in the United States.

Make no mistake, Roe is a popular and respected decision: 77 percent of Americans do not want Roe v. Wade overturned. The anti-choice movement knows this, so they’re doing everything in their power to muddy the waters and push their dangerous agenda. And now, after decades of work, the right has finally achieved an anti-choice, anti-freedom supermajority on the Supreme Court, solidified by the confirmations of Trump’s anti-choice justices—Amy Coney Barrett, Brett Kavanaugh, and Neil Gorsuch.

We most commonly associate Roe with the legal right to abortion, which is crucial for so many in the LGBTQ community. But the case represents much more than that. Roe helped strengthen the legal foundation for the right to privacy, solidifying that, as individuals, we should be free to make the best decisions for ourselves and our families.

Roe and earlier privacy cases like Griswold v. Connecticut and Eisenstadt v. Baird, which concerned the right to use contraception, paved the way for decisions the Supreme Court has made about the LGBTQ community. In the final opinions of both Lawrence and Obergefell, those foundational cases were referenced as part of the decision-making precedent.

From the anti-choice group Susan B. Anthony List to Justice Barrett to Mitch McConnell and beyond, the anti-choice movement knows this acutely. It is one reason they are so eager to see Roe fall—it is a path to securing more legal power and control over our bodies and our choices so that they can uphold their white, patriarchal agenda. By taking on almost 50 years of precedent, the Supreme Court could disrupt the foundation of so many rights the LGBTQ community has secured, including the legal right to abortion.

These cases are hardly the only LGBTQ Supreme Court cases to honor this month, with Bostock v. Clayton County and R.G. & G.R. Harris Funeral Homes Inc. v. Equal Employment Opportunity Commission (EEOC) turning a year old. The EEOC case is one of the first Supreme Court cases to uphold rights specifically for transgender people. Still, its first anniversary comes during a Pride season where we are seeing unprecedented attacks on trans communities, especially youth. This year alone, we have seen the highest number of anti-transgender bills in history, according to the Human Rights Campaign.

Of course, the same anti-choice actors fighting against reproductive freedom and Roe are trumpeting many of these transphobic pieces of legislation. Again, their end goal is power and control, no matter the avenue they take to get there or whose freedoms and rights they trample in the process.

Pride has its roots in protest, in reclaiming power, in standing up against the extremists who wish to control us and boldly telling them, “Not today, not ever.” In the 50 years since Roe and since Stonewall, we are still fighting these battles. This June, let’s care for these roots as we gear up for this Supreme Court battle of a lifetime.