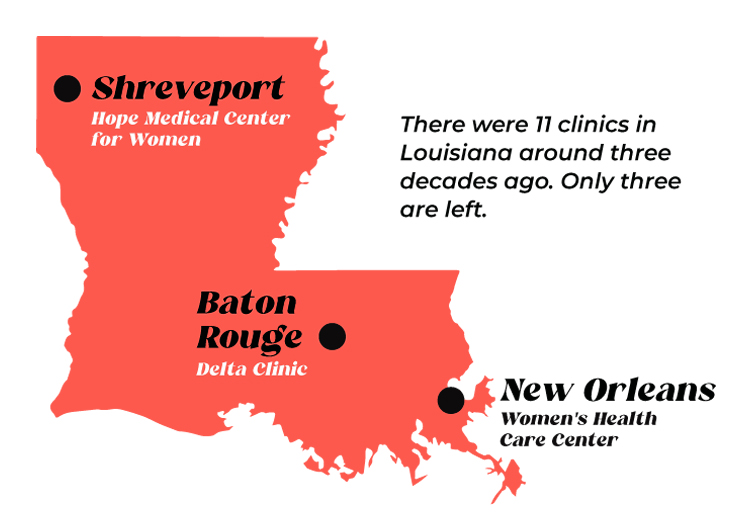 Lakeesha Harris, director of reproductive health and justice at Women With a Vision, said Louisiana’s dozens of abortion restrictions have made abortion a right in name only for many Black residents. Shutterstock/RNG illustration

It took a full day for Elizabeth Gelvin to process the news.

Less than a year after the Supreme Court struck down a Louisiana abortion law as unconstitutional, the Court agreed to hear a case involving a 2018 Mississippi law that would ban abortions after 15 weeks, right around the start of the second trimester and well before a fetus is viable outside the womb. The case, Dobbs v. Jackson Women’s Health Organization, challenges the central holding of Roe v. Wade by asking whether all pre-viability abortion bans are unconstitutional. And unlike last year, the Court now has a 6-3 conservative supermajority.

If the Supreme Court upholds the law, Louisiana’s own 15-week ban—which is tied to the outcome of the Mississippi law—could go into effect, slicing off five weeks of access in the state. Louisiana also has a “trigger law” that would ban abortion outright if Roe is overturned.

Gelvin is the client and community coordinator for the New Orleans Abortion Fund, which supports people getting care across Louisiana and, increasingly, out of state. For her, the Court’s announcement was momentous, even though a post-Roe reality is already here for many of her clients.

“The Mississippi case is terrifying, it’s stomach-churning—but right now in real time, we already have folks that cannot access care,” she said. “The future is scary, and so is the present.”

Louisiana has only three clinics left and already bans abortions after 20 weeks. A directive from the state department of health at the beginning of the COVID-19 pandemic led to two clinics closing temporarily in April 2020 while they interpreted the guidance, and capacity limits from the Centers for Disease Control and Prevention and an influx of patients from Texas led to increased wait times. The New Orleans Abortion Fund had to help more people cross state lines than ever before.

There are many reasons why people have abortions after 15 weeks, including needing to get money together for the procedure plus travel and child care, not realizing they’re pregnant until later, or learning about health issues with the fetus or pregnant person.

If the Supreme Court upholds the 15-week ban (hearings will likely be in the fall, with a decision next June), even more people will have to travel out of state, widening the gap in what’s already a two-tiered system of abortion access in the United States. Families with money will always be able to get care, said Kathaleen Pittman, director of Hope Medical Group for Women, an abortion clinic in Shreveport that provides care up to 16 weeks and 6 days into pregnancy. (Louisiana’s two other clinics go to 20 weeks, Gelvin said.)

Families living on low incomes will have fewer options, and many of Hope Medical’s patients already cite money as a top reason why they’re seeking abortion: They just can’t afford a child—and many of them already have kids.

“Systemic poverty is going to continue,” said Pittman, whose clinic was the plaintiff in last year’s abortion rights victory at the Supreme Court, June Medical Services v. Russo. “It’s an absolute slap in the face to the families we serve. But what can I say, that’s the way it’s always been and apparently the legislators are comfortable with perpetuating this.”

Lakeesha Harris, director of reproductive health and justice at Women With a Vision, said Louisiana’s dozens of abortion restrictions have made abortion a right in name only for many Black residents.

“We know that as a Black, queer-led organization, these laws directly impact the most marginalized here in Louisiana—and that’s Black people, Black women, Black trans men who may need an abortion,” Harris said.

Abortion restrictions are part of a broader system of oppression alongside recent anti-transgender bills and the lack of state action on raising the minimum wage, which together limit people’s bodily autonomy, Harris said.

“It’s not just an abortion issue. We can’t look at this from a singular lens. This is an attack on every aspect of our bodies,” she said. “Yes, it’s a chipping away, bit by bit, at Roe v. Wade, but also in addition to all of the other laws that chip away at our rights and access as Black people, as queer people, as trans people, it confines [us] to a system that is set to oppress who we are as a whole.”

Harris said this playbook isn’t limited to the South, citing recent bills out of states like Pennsylvania. “The whole nation should be on alert. This isn’t just a Southern strategy.”

The Hope clinic already works with at least five abortion funds to help their patients address costs, and the need for financial assistance would only increase with a 15-week ban. Pittman underscored that if a patient has to fly, they’d be booking their travel at the last minute, when prices are often higher.

“It’s a struggle to help take care of the people locally, not to mention sending them to God knows where,” Pittman said. “There are never enough resources. We would have to work even harder to get women where they needed to be. We’ve been putting out pleas to everybody. It makes my head hurt thinking about it.”

The pandemic has been a learning exercise for a post-Roe future. Before COVID-19, the New Orleans Abortion Fund mostly offered financial help, but then it evolved into an “abortion travel agency” out of necessity, Gelvin said. “Supporting folks in getting care in Texas and Florida has been increasingly the norm,” she said.

A Texas city recently passed a six-week ban that will go into effect on September 1 unless legal challenges halt it. Florida is the only state in the Southeast that would have abortion protections if Roe v. Wade falls, according to the Center for Reproductive Rights. The next closest state for many would be Illinois, hundreds of miles away; the New Orleans Abortion Fund also helped people travel there during the pandemic. Clinics in these states may become overwhelmed.

Traveling to Florida for an abortion is “scary and sad and already a lived reality,” Gelvin said. “It may be more realistic, both logistically and financially, to support people to take a flight to South Florida to access their care there than elsewhere.”

Harris said she’s already made connections with reproductive groups in Illinois in the event of an unfavorable Supreme Court decision. The national reproductive justice umbrella organization, In Our Own Voice, is making plans and gathering resources to help more people travel in preparation for the future, she said.

If abortion becomes restricted beyond a 15-week ban in Louisiana, neither the New Orleans Abortion Fund nor Women With a Vision plans to direct people to information on self-managed abortion with pills because of the legal risk involved. Louisiana is one of 19 states that bans telemedicine for abortion pills.

“From a harm-reduction standpoint, and not wanting to get more Black and brown people locked up, or people locked up period, our challenge then is to see how we can assist with transporting people to friendlier states,” Harris said, noting that undocumented people crossing state lines could face additional challenges.

Arguments in the Mississippi case, Dobbs v. Jackson Women’s Health, haven’t been scheduled, but as the country braces for the Supreme Court’s decision, one thing is clear: Local reproductive rights and justice groups will need more money to help people continue to get abortions.

“The reality for abortion funds, especially those in heavily restricted states, is that the need has always outpaced what is available, even in moments of great attention and greater windfall,” Gelvin said.

Gelvin said that applies to abortion funds like New Orleans Abortion Fund, as well as practical support groups that offer assistance like coordinating and funding travel, lodging, and child care. She noted that money people may have for their procedure isn’t worth much if they can’t afford to get to the clinic. Groups in the Southeast that do this work include ARC Southeast, Yellowhammer Fund, Fund Texas Choice, Clinic Access Support Network, Tampa Bay Abortion Fund, and Florida Access Network, Gelvin said. There’s also the Midwest Access Coalition and the Brigid Alliance, which specializes in support for later abortion patients.

Gelvin recommended donating directly to your local abortion fund or support group, giving monthly if you can, organizing fundraisers, and donating your time if money is tight. But keep paying attention, especially as states like Louisiana prepare for another hurricane season that can disrupt people’s reproductive care.

“I would just hope that people continue to pay attention and stay activated and organized throughout all of this long year that we have ahead, before we have some sort of outcome from the Court,” she said.