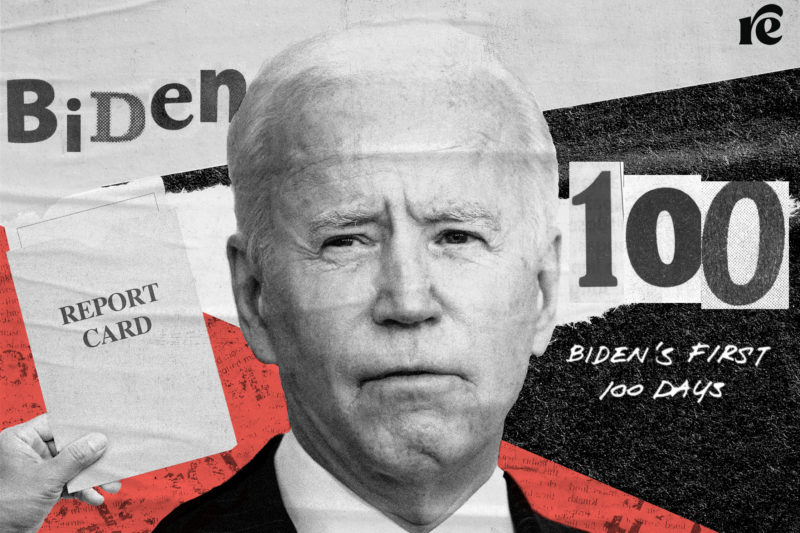 The overall feeling among our interviewees is that there is more President Joe Biden could be doing to secure sexual and reproductive health and rights—a lot more. Rewire News Group illustration

President Joe Biden will deliver his first address to a joint session of Congress on Wednesday night. Timed to his 100th day in office—a milestone historians use to assess how effectively a new president is governing—the speech will no doubt paint a positive picture of the administration’s efforts so far.

We applied a different lens to President Biden’s first 100 days, asking a diverse group of leaders in the reproductive and sexual health, rights, and justice space to grade the administration on its handling of these issues so far. The evaluation that’s emerged from our experts is both inspiring and disheartening.

While all of our experts give President Biden credit for repealing the global “gag rule,” thereby reinstating global health aid to agencies that provide abortion information and referrals; and preparing to roll back the previous administration’s rules around family planning program Title X, which barred federal funding from any health organizations that offer abortion referrals or services, the overall feeling is that there is more the president could be doing to secure sexual and reproductive health and rights—a lot more.

At the top of our interviewees’ wish lists is the repeal of two federal provisions that restrict abortion access: the Hyde Amendment, which prevents low-income patients from using federal Medicaid funding to cover abortion care; and the Helms Amendment, which prohibits foreign aid money from going toward abortion care. The group is also eager to see Biden’s proposed changes to Title X actually become adopted rules, and to hear the president made medication abortion more accessible.

But it’s the president’s reluctance to clearly and unapologetically express his support for abortion that keeps him from earning higher than a C+ average from our experts (with one opting to mark him as an “incomplete”). Not only has the president failed to weigh in on the record number of anti-abortion measures introduced in state legislatures thus far in 2021—a silence that’s particularly striking given his passionate public messages about state anti-trans bills and anti-voting bills—but perhaps most alarmingly, he has yet to publicly say the word “abortion,” choosing to stick with a more tepid “pro-choice” framing.

For our experts, hearing President Biden say “abortion” isn’t about semantics. As Bracey Sherman explains, “How can we trust that you have our best interest at heart if you’re not even willing to stand with us and talk about it openly?”