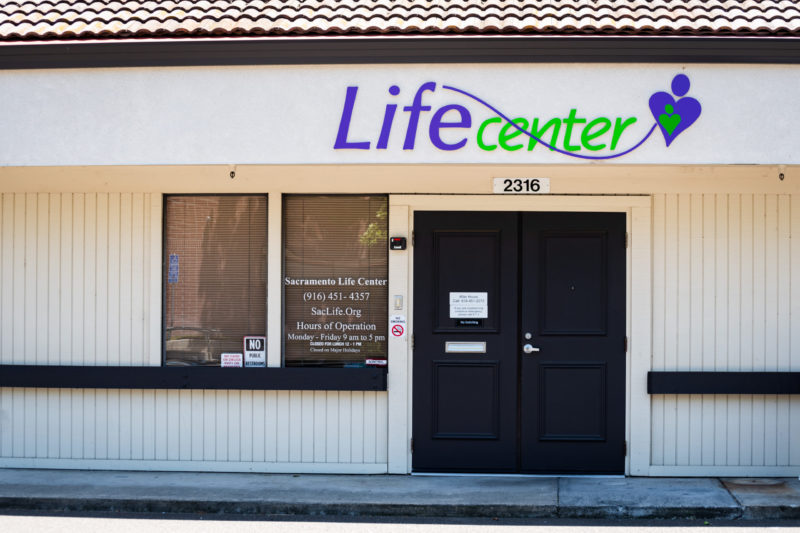 There are more than three times the number of crisis pregnancy centers than there are abortion providers, according to the Guttmacher Institute. Shutterstock

Picture this: You’re pregnant, and you need an abortion. Maybe you’re not ready to be a parent; maybe you have a medical condition that makes pregnancy dangerous for you; maybe you already have the size family you want; maybe you just don’t want to be pregnant.

Whatever the reason is: It’s valid. So you Google and find a clinic near you so you can have an abortion. You find one that says they offer pregnancy services, so you call to get more information and they tell you to come in. When you pull into the parking lot, you notice it’s right next door to another abortion clinic—which you find odd, but the website seemed legitimate and the person on the phone was warm and disarming so you go ahead with your visit.

But once inside, things start to feel off. You’re ushered through a series of rooms, handed leaflets, and shown videos about the risks of abortion and the mental toll it will take. You’re given a “free” ultrasound to see your fetus; despite never asking for one, it doesn’t really feel like a choice. Finally, you’re taken to a room filled with baby clothes and other items new parents would stock up on.

It’s too late now, but you’re realizing this isn’t an abortion clinic at all. It’s a “crisis pregnancy center.”

CPCs are fake abortion clinics set up by anti-abortion extremists to trick people seeking abortion into not having them. They often set up shop adjacent to real clinics to really up the ante on the deceit. These fake clinics force patients to have ultrasounds and sit through lectures on how abortion gives you cancer and how it will murder your soul and rob you of your ability to have more children and how it will anger god—you know, the usual.

There are more than 2,500 of these hellholes around the country, which is more than three times the number of abortion providers, according to the Guttmacher Institute. Many are not medical facilities and there are no uniform licensing requirements. Oh, and they’re taxpayer funded. Tens of millions of dollars from federally funded abstinence education programs were funneled directly into CPCs under President George W. Bush; most recently, CPCs received at least $4 million from the government’s pandemic bailout.

The unfortunate truth is deceptive pregnancy centers have the law on their side.

And if you’re reading this and thinking, um… what the fuck? Well, you’re right. CPCs are more than just a money-draining nuisance—for many patients, a CPC can delay access to actually having an abortion at, you know, a real clinic. The federal money these fake clinics receive is a blatant affront to the separation of church and state as, unsurprisingly, many are religiously affiliated. Not to mention, they are part of a grander scheme of anti-abortion culture that perpetuates violence against patients and providers. And they do it all under the guise of “pregnancy counseling” or some other vague phrase they know will mislead people into thinking they actually provide care.

For what it’s worth, some lawmakers are trying to change this.

Connecticut lawmakers on the Public Health Committee voted Monday to send a bill to the state senate floor that would allow CPCs to be sued for deceptive advertising by the state’s attorney general. Opponents of the bill say the state’s Unfair Trade Practices Act would cover any actionable behavior by CPCs, but their logic becomes transparently flawed when you consider they also argued the nature of the bill was “defamatory” in its treatment of CPCs.

“Rep. Jillian Gilchrest, D-West Hartford, a chief proponent of the bill, recalled at least two doctors who said patients of theirs had been deceived in a pregnancy center,” the Connecticut Post reported. Gilchrest went on to say:

There’s a lot of shame placed on women. A lot of blame placed on women. Women are actually physically sometimes under attack when seeking abortion in our state and country. To me, this legislation is about creating uniformity across the state and ensuring that regardless of the website that a woman visits, or the crisis pregnancy center she walks into, she receives medically accurate information.

Sounds reasonable enough, which raises the question: If the only aim of legislation like this is to ensure patients receive medically accurate information, doesn’t the opposition have to concede its comfort with or outright advocacy for lying to patients? For providing information that’s misleading and anti-science?

The unfortunate truth is deceptive pregnancy centers have the law on their side. In 2018, the U.S. Supreme Court ruled that a California law requiring these fake clinics to post disclosures about what they really do violated the First Amendment. This just reinforces the same old hypocritical playbook we see from anti-abortion folks all the time: crying “First Amendment violation” because they can’t scream at patients walking into clinics—or lie to them to get care.

But while the information they peddle might be fake, the consequences are very, very real.