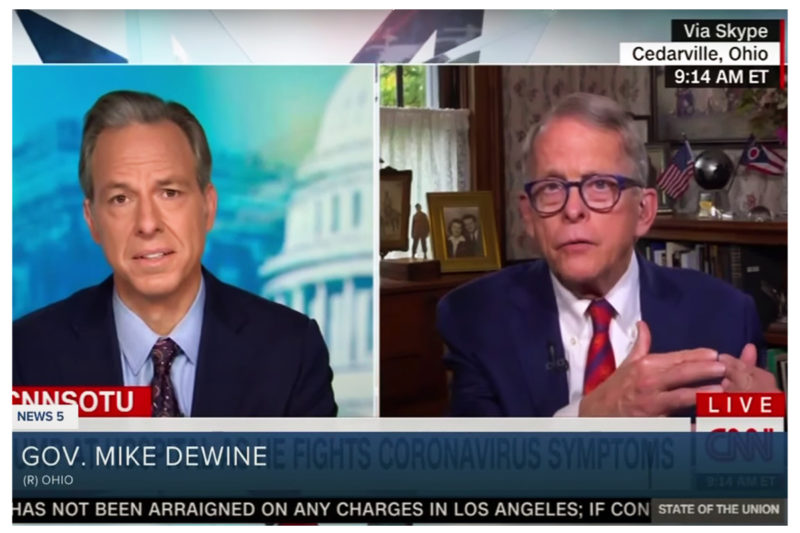 Ohio Gov. Mike DeWine is a CNN favorite—he loves to wax poetic about the soul of the Republican Party and the harm Donald Trump has caused for conservatives. WEWS-TV/YouTube

There are no “good” Republicans.

John Kasich is the worst. Like, a full-scale monster. As governor of Ohio, he signed some of the nation’s most restrictive abortion laws. When he ran for president in 2016, he supported a 20-week abortion ban; he wanted to cut income taxes, repeal the Affordable Care Act, and stop the Environmental Protection Agency’s regulation of emissions.

So why the hell is he on my TV every night talking to Don Lemon or Chris Cuomo like he’s some voice of reason? Like he’s an arbiter of truth, like a supposed bright spot in an otherwise fraught Republican Party?

Donald Trump royally fucked this country in a lot of ways: a 9/11’s worth of fatalities every single day from a pandemic that could have been alleviated by, I don’t know, not suggesting we drink bleach; a Supreme Court stacked with virulently conservative judges poised to set legal precedents that will affect peoples’ rights for decades; a litany of executive actions gutting the rights of pretty much every marginalized group in the nation; incitement of an insurrection; the list goes on. (It didn’t help matters that we had to look at that awful ill-fitting suit and too-long red tie every day for four years.)

As the Biden administration works to undo many of the Trump administration’s harms, one staple of the Trump era remains an existential threat to our democracy: the “good” Republican. You know the breed—the conservative lawmaker who, by way of distancing themself from Trump, has been ordained some moral hero.

Kasich is just one example of this scourge; CNN is practically a who’s who of conservative politicians and pundits seeking redemption these days. People like Anthony Scaramucci, Ohio Gov. Mike DeWine, Nebraska Sen. Ben Sasse, and the entirety of the Lincoln Project are all creating savior complexes for themselves by distancing their politics from Trump’s. But here’s the thing: You don’t get a gold star for opposing white supremacy and fascism; that’s a lower bar than we should be setting. And trust me, I date cis men so I’m a certified expert in low bars.

Mitt Romney is often praised for his pragmatic conservatism (an oxymoron, let’s be real). He went on record saying he voted against Trump—without ever actually saying who he voted for. But in late January, the GOP darling introduced a 20-week abortion ban in Congress; months earlier, he had voted to confirm Amy Coney Barrett to the Supreme Court. So maybe let’s not canonize him, OK?

Gov. Mike DeWine is another CNN favorite—he and his bright-blue acetate glasses love to wax poetic about the soul of the Republican Party and the harm Donald Trump has caused for conservatives.

But back in his home state of Ohio, he signed a law requiring the burial of fetal remains, an abortion restriction that forces providers to contract with funeral homes to remain compliant with state law. These laws function like admitting privilege requirements: Lawmakers force providers to contract with area hospitals knowing full well that these hospitals will refuse, which will result in clinic shutdowns—except with these laws, it’s funeral homes rather than hospitals. Fetal burial laws are especially cruel because they force people who have abortions to treat the experience like a death even if they don’t want to. For some, terminating a pregnancy is something to grieve. For others, abortion is a cause for celebration. Others may feel neutral. These reactions are all valid. But fetal burial laws, like the one DeWine signed, force everyone—no matter their reason for the abortion—to treat their abortion like a death.

Even former Vice President Mike Pence received the glossy treatment toward the end of Trump’s presidency. He was portrayed as the adult in the room; after all, he attended the inauguration and shook hands with the Bidens. But have we all forgotten that he’s one of the most anti-abortion politicians ever? Possibly? When he was governor of Indiana his state literally incarcerated a woman for miscarrying, so when it’s time for his redemption tour let’s just not.

In many ways, Republicans attacking Trump are like Frankenstein decrying the monster. Would we even be where we are today if for decades the GOP hadn’t used issues like abortion as a battering ram to push through their bigoted and harmful policies?

When you get down to brass tacks, the actual politics of Trump are not that dissimilar to those of Romney, or Mitch McConnell, or even Liz Cheney, who was censured by the Wisconsin Republican Party after voting to impeach the former president. They might disagree with the way he goes about it; maybe inciting a coup was a bridge too far. But all of these politicians would watch a pregnant person die from an unsafe abortion before they offered them federal funding so they could afford to have one. They would sooner strip people of their bodily autonomy than support policies that ensure people can choose how and when to become parents. Despite their feelings about Trump, these are not good people, and they never have been.

Because when it comes down to it, Republicans want to hold onto their seats in Congress so they can keep making life a living hell for anyone who can become pregnant, people of color, LGBTQ folks, immigrants, and anyone who needs health care. The writing is on the wall; Trump’s supporters are loud and obnoxious, but their bark is bigger than their bite—they’re not winning elections. Republicans want to win, and Trump lost.

While it would be nice to believe that this is some fairytale ending where the Trump presidency makes a bunch of craven politicians grow a heart, what is actually happening is a game of survival. If these were changed people, they would change.