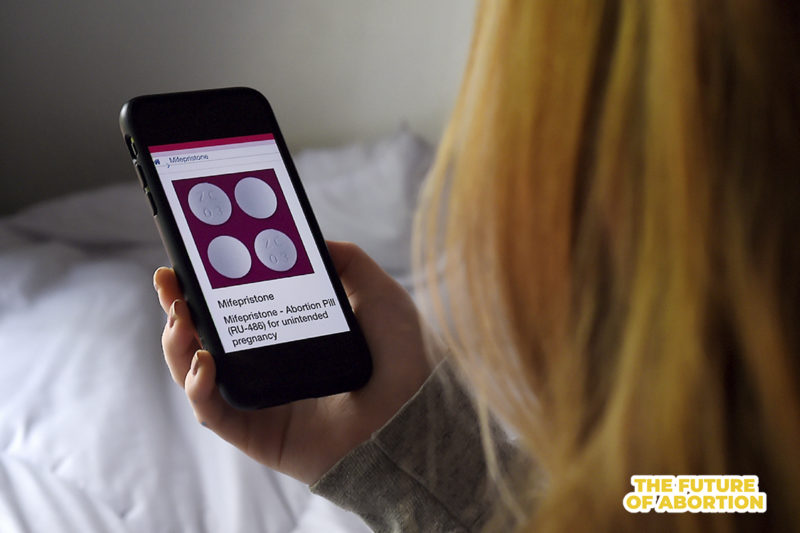 The deeper I delved into my training on self-managed abortion, the more questions arose. Olivier Douliery/AFP via Getty Images

Last October I found myself in a situation familiar to a lot of people: at home and on a Zoom meeting for work when I heard an insistent knocking at my door. At first I mistook it for my rowdy cat, since in my nearly year-long quarantine practically no one has knocked on my door. I muted my call and ran to answer, laptop in hand. I opened the door and immediately the person on the other side shoved a pen into my hand. I had a package and I needed to sign for it.

I looked at the bare envelope, with no return address and illegible scrawl on the sticker. I noticed the tiny red text that read, “Personal supply of Rx medicines.” At once I knew what this package was. Inside were medications, prescribed in Austria, filled in India.

I finally received my abortion medication.

Since the beginning of the coronavirus pandemic, I’ve become more involved with self-managed abortion. This summer I watched the back-and-forth in Texas between abortion providers and anti-choice lawmakers who tried to use the pandemic as an excuse to block abortion access by arguing abortion was not an essential medical service. Abortion remains legal in Texas despite those efforts, but for thousands of patients the fight itself affected their care. During that time patients had to cancel their appointments or travel out of state for care, facing the impossible choice between delaying care or risking their health to get it.

So when an opportunity arose to join a training session with SASS USA (Self-Managed Abortion; Safe and Supported), a project of the organization Women Help Women, I jumped on it. During the four-and-a-half-hour training, led by co-founder Susan Yanow, we covered the medical protocols for self-inducing an abortion using mifepristone and/or misoprostol. We covered the legal gray zone that self-managed abortion exists in, and the various resources available for pregnant people looking to terminate their own pregnancies. “Information is power,” Susan kept repeating.

Afterward, I helped lead trainings and even referred multiple women toward websites where abortion medication can be bought, including the online guide from Plan C, an organization that supports access to abortion pills. The Plan C guide is the only resource of its kind: a state-by-state directory that includes new telemedicine companies, Aid Access, abortion clinics, and more.

According to Plan C, “Through these innovative new models of telemedicine and self-managed abortion, patients are able to access the option of medication abortion with no in-person visit or testing required, and pills mailed directly to patients’ homes. This approach is endorsed by the American Academy of Obstetricians and Gynecologists and the World Health Organization, among others.”

But the deeper I delved into my training, the more questions arose. Given the new conservative makeup of the Supreme Court and its ability to overturn the federal right to abortion, is the process of obtaining pills online going to become the norm? Will more and more people flock to telemedicine abortion services and online pharmacies? And what is the process of buying abortion medications online really like?

It turns out, the process itself is relatively straightforward. All a person has to do is fill out a short survey asking how far along in their pregnancy they are and if they have preexisting conditions, allergies, or an IUD. Then, they get an email with a PDF of their prescription for mifepristone and misoprostol from Aid Access—an initiative run by a physician in Austria, Dr. Rebecca Gomperts—which they then forward to the pharmacy in India that fills and ships the medications.

The entire process takes about 20 minutes, and 24 hours later the person gets a confirmation email that their medications are on the way. Costs begin at $95, and can be paid through PayPal. Obtaining abortion pills is so convoluted in this country—from forced waiting periods and counseling to outright bans on telemedicine to prescribe them—that receiving pills online in such an easy manner feels shocking.

“People who are considering self-managing their abortions need accurate information about how people are accessing pills, how much they cost, the shipping time, and whether there are any legal considerations they need to consider before choosing this option,” Elisa Wells, co-founder and co-director of Plan C, told Rewire News Group. “We want people to know that, with adequate information, these pills are safe and effective for self-use and that a home abortion with pills is possible in the U.S.”

But why is a resource like this even necessary if managing an abortion at home is so safe? Well, according to Elisa, the pills are extremely regulated, more so than other common medications like Tylenol or Viagra. This also makes them needlessly expensive, despite the pills being available for just $6 to $8 over the counter in other countries.

The juxtaposition of this medication being so cheap and readily available in other countries compared to the overregulation in the United States floored me. Here, abortion medication is not widely available through the mail to pregnant people seeking abortion. Thirteen states are a part of a national Telabortion Study: Colorado, Georgia, Hawaii, Illinois, Iowa, Maine, Maryland, Minnesota, Montana, New Mexico, New York, Oregon, Washington D.C., and Washington state. However, while the study is allowed to send patients abortion medication through the mail, it requires that patients obtain ultrasounds or blood tests, which means traveling to a clinic and paying anywhere from $250 to $750. My abortion pills cost $95, including international expedited shipping from India.

The Food and Drug Administration has frequently found itself in hot water over this issue. At the onset of the pandemic, the American Civil Liberties Union, National Women’s Health Network, and other organizations sued the FDA to allow the medications to be sent to patients through the mail during the pandemic. Under normal circumstances, even telemedicine patients must obtain the first of the medications, mifepristone, in a hospital, doctor’s office, or clinic. During coronavirus, it is extremely unsafe to have patients needlessly enter a medical setting to pick up the medications, given that both mifepristone and misoprostol can be taken at home. Lower courts sided with the ACLU, and clinics in certain states were able to begin sending the medications through the mail.

This is where resources like Plan C come in. About 60 percent of visitors to their website head straight to the guide to obtaining abortion pills. Since March, 130,000 people have looked at the guide, according to Plan C. While clearly this information is in high demand, Plan C is also working to destigmatize self-managed abortion.

But obtaining abortion medication in order to self-manage is not without risk. Accessing the medications online may be relatively straightforward, but the reality is self-managed abortion exists in a dangerous legal gray zone in this country, especially for communities of color.

If/When/How, a national network of law students and legal professionals working to make reproductive justice a reality, specializes in abortion laws and provides support for those considering self-managed abortion.

“The human right to have an abortion encompasses the right to self-manage an abortion,” If/When/How Executive Director Jill Adams told Rewire News Group. “The abortion right remains protected by the federal constitution and legal in every state today. Nevertheless, there is some legal risk, albeit low, for a person who ends their own pregnancy. The degree of risk varies based on where the person lives and, as with all aspects of the criminal system, on the person’s race, age, income level, immigration status and other identities and conditions. Overzealous prosecutors have weaponized antiquated, unconstitutional self-managed abortion bans in a handful of states.”

“Even though self-managing abortion using medications bought online is not technically illegal, people still can be criminalized because prosecutors bent laws in other states, misapplying them to people who end their own pregnancies when that was never the purpose or the intent of the law. It’s often as though the prosecutors are acting not based on what the law says, but in spite of it,” Adams said.

Why are people of color and with low incomes more likely to be criminalized for self-managing an abortion? Adams said there are a number of factors:

First, these groups tend to experience greater barriers to clinic-based abortion care. Second, there may be a higher desire or tendency among these groups to rely on community-based or self-directed health care. Third, because of inequities in the health-care system, many members of these groups experience disparities, including disparities in pregnancy outcomes, and could experience a negative pregnancy outcome that could bring them to the attention or under the suspicion of someone in the medical community or an agent of the state that these groups have far more interactions with, which may be: immigration officials, county welfare officers, social workers, school officials who are mandatory reporters. However, no state requires anyone to report a suspected or confirmed self-managed abortion, including by health-care professionals.

And then finally, it’s been well documented that Black, Indigenous, and other people of color and Medicaid enrollees are more likely to be criminalized in relation to a pregnancy. So for all of those reasons, members of those groups do experience a heightened risk of criminalization for self-managing [an] abortion.

Self-managed abortion is here to stay

I am not here to argue that everyone should immediately buy abortion medications online—in fact, stockpiling medications like these ones or emergency contraception is harmful because it takes away access for those who need it. I chose to order a dose of these medications to learn about the process and how best to support people—friends, family, and strangers—who come to me for support and information about self-managed abortion. We all have the right to know this kind of information.

And, as Susan Yanow says, information is power. Conservative lawmakers and the federal courts may one day be successful in making abortion illegal again, but self-managed abortion is here to stay.