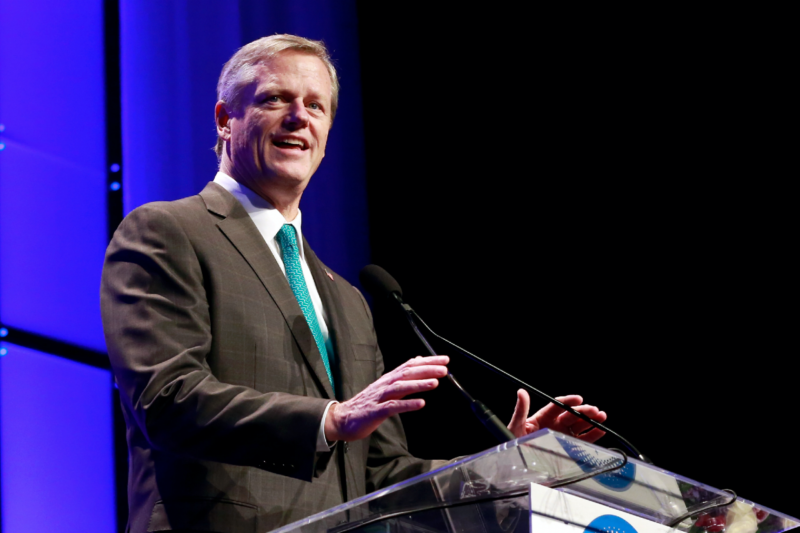 With the fate of abortion access for young people across the state hanging in the balance, all eyes are on Massachusetts Gov. Charlie Baker. Marla Aufmuth/Getty Images for Massachusetts Conference for Women

For over a year, abortion rights advocates in Massachusetts have tried to pass the Roe Act, a bill designed to protect and expand abortion access. And while the Roe Act hasn’t moved forward, provisions from the legislation were included in the budget that hit Gov. Charlie Baker’s desk earlier this month. The legislature’s budget would have expanded access to later abortion care and enshrined abortion rights in the law. And, notably, it would streamline the state’s parental consent laws that have made abortion access a living hell for young people in the state for some 30 years.

All Baker had to do was sign the budget and return it to the state legislature. But no.

“I cannot support the other ways that this section expands the availability of late-term abortions and permits minors age 16 and 17 to get an abortion without the consent of a parent or guardian,” Baker wrote in a letter to lawmakers.

Baker then sent changes back to the legislature for approval in the form of a standalone bill. Not so fast, they said. On Thursday, the Massachusetts House voted to reject Baker’s proposal, and the senate joined them on Friday. The abortion access legislation now, once again, heads to Baker’s desk.

With the Supreme Court packed with conservative justices frothing at the mouth to gut Roe v. Wade, these provisions are more critical than ever; and, in fact, they were passed with the intention of protecting abortion access in anticipation of the conservative supermajority on the Supreme Court overturning or gutting Roe.

So while we wait to see if Baker decides to stand for the dignity of pregnant people in his state, we’ll take a closer look at one of the more contentious provisions at stake: the parental consent law.

As it stands, young people who cannot receive consent from a parent are forced to go to court for a judicial bypass—a hearing in which the young person has to make their case to a judge to prove they’re mature enough to have an abortion. If the judge finds that they aren’t, they have to consider if it is in the minor’s “best interest.” And as advocates for youth access have long pointed out, it’s hard to imagine a situation where a young person is not mature enough to have an abortion, but is mature enough to parent.

And like all abortion restrictions, these laws come down the hardest on marginalized pregnant people: young people without parental support systems, those in abusive or unsafe households, and those living in foster care. The policies don’t affect young people who can involve a parent in their abortion decision, because, well, they can involve a parent. But for a young person living in a home with abuse, or for a teenager who may be uncomfortable discussing sex, pregnancy, and abortion with their parents, these laws make accessing abortion into a hellscape.

Anti-choice activists love to scaremonger about 14-year-olds getting abortions without a parent—which, first of all, would be fine if that’s their choice. But secondly, studies show that the majority of young people do involve a parent in their abortion decision; not only that, the younger someone is, the more likely they are to do so. In addition, almost all young people involve at least one trusted adult. Almost none are going through this alone. And for those few that are? Parental involvement laws only make their life harder.

These laws also delay access: Young people tend to detect their pregnancies later than adults, and a recent study conducted in Massachusetts found that judicial bypass delayed access roughly a week for the young people who were forced through the process. This might mean the difference between a medication or procedural abortion; it might mean needing later abortion care, that’s even more difficult to access.

If Baker signs the legislature’s proposal, Massachusetts will join a small group of states with comprehensive abortion access for young people. Many of these are neighboring states in the Northeast, a fact that further bolstered the case to overhaul the longstanding law: Studies showed young people in Massachusetts were often traveling out of state for their abortion care rather than navigating the parental consent and bypass process.

Parental involvement laws shouldn’t exist at all. Lowering the age of consent to 16 should be enough of a compromise to appease Baker’s conservative sensibilities about abortion and reproductive health care.

So Baker has a few options here. He can do the right thing: approve the legislature’s pro-choice measure and stand with pregnant people in his state. He can once again refuse to protect abortion access by vetoing the legislation, in which case the house will need a two-thirds majority to override his veto before the legislative session ends on January 5. Or he can do nothing and sit on the measure for ten days; if those ten days are up before January 5, the provisions will automatically become law without his signature.

With the fate of abortion access for young people across the state hanging in the balance, all eyes are on Charlie Baker. But no matter what he does and no matter what the law says, know this: Everyone, including young people, deserves comprehensive access to abortion care—on demand, without shame, and without barriers.