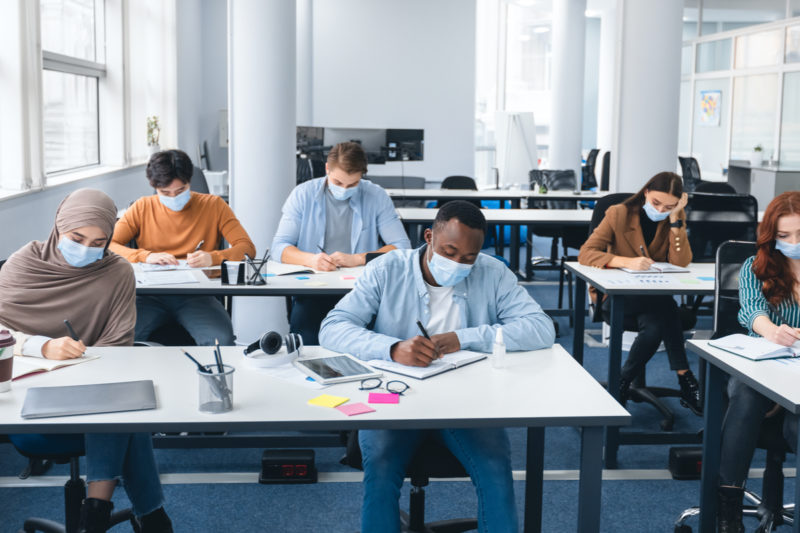 To truly dismantle rape culture, reaching students during college, where consent education may feel like a contradiction of everything that came before, is too late. Shutterstock

The fight for comprehensive and inclusive sexuality education gathered unprecedented momentum in the past decade.

But these conversations about inclusive sex ed in schools are not happening everywhere—in fact, federal funding for abstinence-only-until-marriage programs increased under the Trump administration. That’s despite research that shows it to be ineffective at preventing sexually transmitted infections (STIs) and unplanned pregnancy.

And now there’s evidence showing how sex education textbooks contribute to rape culture by promoting abstinence. The new report, released in October, pinpoints the harmful messages reinforced in textbooks. Here are the some of the lessons in rape culture that schools are teaching.

Abstinence is the only way to preserve one’s safety

Abstinence-only-until-marriage sex education curricula—which, in recent years, have been rebranded as sexual risk avoidance (SRA) programs—emphasize that abstinence is the only way to remain safe, particularly from STIs. Though these programs do sometimes mention condoms and other forms of contraception, they often focus on the failure rates of these forms of protection.

“Just wait,” these lessons implore students, though research shows that adolescents who have taken abstinence-only sex ed are not any more likely to abstain from penetrative intercourse than other students.

Meanwhile, because of the lessons they’ve learned about the ineffectiveness of condoms and other forms of protection, students are sometimes less likely to practice these forms of safe sex, and more susceptible to contraceptive coercion.

Not abstaining from sex increases the risk of many things, including rape

Taking the misguided lesson above a step further, SRA teaches students that not even safer sex is safe. As already mentioned, this message has negative implications regarding how students view the efficacy of contraception.

But beyond that, programs that don’t include lessons on safer sex also generally don’t cover affirmative consent. Which means students never learn (until college, maybe) that even if you consent to sexual activity, you have the right to withdraw that consent at any time.

This puts the blame for many instances of sexual assault squarely at the feet of those who chose to be sexual in the first place, but then changed their mind.

Girls are responsible for preserving their abstinence

Abstinence-only-until-marriage programs “reinforce gender stereotypes about female passivity and male aggressiveness,” according to a 2017 study, forcing girls to be the gatekeepers for the hottest commodity of all: their sexuality. This sets up an adversarial relationship between girls and boys, in which girls are always expected to demur in the face of those (allegedly) sexually voracious boys’ attempts to steal their virginity.

And if those attempts fail? They—the victims of sexual aggression—are the failure.

Meanwhile, boys—who learn that their libidos are a powerful and uncontrollable force of nature—push and push and coerce their way into getting what they want. Because they have learned that, thanks to testosterone, it is their biological right. Or at least a biological need.

As for a girl’s right to experience pleasure … wait, is that a thing?

If you have premarital sex, you’re damaged goods

The paragon of a sexually healthy person is a white, cisgender, able-bodied heterosexual who only engages in sex within the context of marriage

This message is damaging for so many reasons, chief among them that those who don’t fit into this box may feel shame over who they are because they don’t see their identity and their experiences reflected in the curriculum.

But on top of this, when a particular identity is portrayed in a negative light—when discrimination against those who align with this identity is treated as acceptable—harassment and violence against these marginalized populations increase. Including sexual violence.

The lessons that contribute to rape culture are internalized early in life, soaked up through the way we’re raised and the behaviors we observe. They’re compounded by inadequate sexuality education.

To truly dismantle rape culture, reaching students during college, where consent education may feel like a contradiction of everything that came before, is too late.

We need to toss out those health education textbooks—along with the insidious messages they contain.

Students need to be given something completely new.