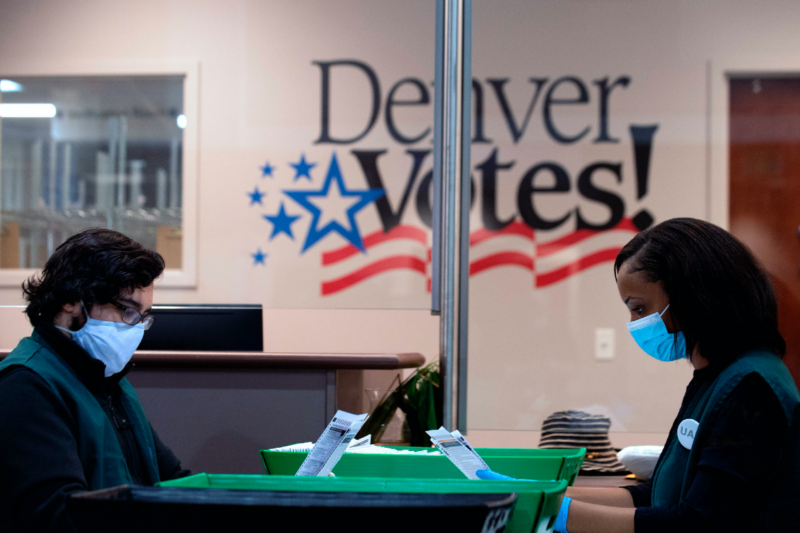 Colorado remains as one of the few states that allow abortions later in pregnancy. Jason Connolly/AFP via Getty Images

It was April of 2019, and Leah was 24 weeks and three days pregnant. She was excited to be a parent, just like any would-be mom with a very wanted pregnancy, going about the joyful and semi-terrifying work of planning and preparing for motherhood. But nothing could have prepared her for her doctor’s words at a high-risk ultrasound appointment.

“My baby had congenital defects which made him incompatible with life,” Leah, who asked to be identified by only her first name, told Rewire News Group. “Additionally, I have a rare disease called idiopathic intracranial hypertension. IIH is a real threat to my eyesight—I’ve gone temporarily blind from it before. It became evident at the doctor’s appointment at 24 weeks that when I took the medication for my disease which saves my eyesight, it was also depleting my baby’s amniotic fluid levels to the point he was being crushed inside of me.”

Leah’s options were limited living in Iowa, where abortions past 22 weeks’ gestation, or 20 weeks after fertilization, are banned. If she had stayed, she would have been forced to continue her pregnancy, which was incompatible with life, while being unable to take her medication. If she didn’t terminate her pregnancy, the only options left to save her eyesight would be invasive procedures, including neurosurgery.

“I was in a position no human being should ever be put in because of my state’s abortion laws, “she said.

So Leah found that help in Colorado, one of the very few states that allow abortions later in pregnancy. In the 2020 election, Colorado legislators introduced Proposition 115 that would prohibit almost all abortions after 22 weeks—their fourth attempt to implement an anti-abortion ban at the ballot. Voters rejected it by a wide margin: 59 percent to 41 percent.

So the good news is that for now, people facing pregnancy outcomes like Leah’s—or those forced to have an abortion later in pregnancy due to anti-abortion laws delaying care in their home states—can still seek refuge and care in Colorado.

“Coloradans are allowing future women to make decisions with their doctors to pursue the best and most ethical outcomes if their own world comes crashing down [after] receiving confirmation that their baby is incompatible with life,” Leah said. “Iowa abortions laws will continue to dehumanize women like me, while Colorado’s abortion laws will continue to save women like me.”

Leah’s story is a testament to the state of abortion access in the United States—it all depends on where you live. And the outcome of another abortion referendum on the ballot on Tuesday proves that this dire reality is not going to change anytime soon.

In Louisiana, voters approved an amendment to the state’s constitution that denies pregnant people in the state the right to have an abortion. Louisiana Amendment 1—like the similar “trigger law” that already existed as a Louisiana statute—will let lawmakers ban abortion outright if and when Roe v. Wade is overturned, a likely possibility given the confirmation of Justice Amy Coney Barrett. Louisiana is one of ten states with trigger laws that would automatically ban abortion if federal abortion protections are rescinded.

“What we’re seeing in Louisiana is an expansion of what we’ve seen for decades. Since 1973, policymakers in the state have tried to make it as hard as possible to access abortion care,” Elizabeth Nash, acting associate director for state policy at the Guttmacher Institute, said.

“This amendment is the fourth we’ve seen in six years (Alabama, Tennessee and West Virginia already passed similar amendments), and may be the catalyst for other states to try something similar. It’s already the case that where you live is a major determinant in what access looks like. And none of this does anything to provide care to people when they need it most.”

“We hope the results from Prop 115 can pave the way for bold, proactive measures that protect abortion care and dismantle remaining barriers.”
-Erika Christensen, abortion storyteller

For Victoria, who lives in New Orleans, her ability to access abortion care when she was five weeks pregnant rested entirely on where she lived. While she was lucky to be only one mile away from one of only three clinics in the state, the limited access meant that when she walked into the clinic at 9 a.m., nearly 40 people were already there.

“There were protesters everywhere—it felt like 20 of them,” Victoria told Rewire News Group. “And they’re screaming at you and running up to you. The escorts are great but it’s just a very intense experience. There were no more chairs left, just people sitting on the floor. I did not anticipate it would be like that at all.”

After a mandatory 24-hour waiting period, an expensive ultrasound, and being told that she wouldn’t be able to have the procedure for at least a couple of weeks because the clinic was so busy, Victoria decided to fly to Washington, D.C., to have the abortion instead. She was shocked to learn there was no waiting period, no mandatory counseling, and the clinic would even take her insurance to help pay for her abortion.

“It was cheaper to go to D.C. and have an abortion at six weeks—to fly there and fly back—than it was to do it here in Louisiana,” she said. “What many pro-choice women in other places don’t understand is that here, in the entire state, there are only three clinics and they’re constantly in danger of being shut down. Our ‘next state over’ is either Texas or Alabama. I know this amendment will harm women.”

The ability to fly to a different state to obtain abortion care is a privilege, and that’s not lost on Victoria—she knows she is the exception not the rule. Six states have only one clinic that provides abortions, and Republican lawmakers continue to introduce and pass TRAP laws (targeted regulations of abortion providers) with the goal of shutting those clinics down entirely. These laws, which rely on lies about the safety of abortion procedures as a basis for medically unnecessary requirements for abortion care—like requiring abortion providers to obtain hospital privileges, mandating the width of clinic hallways, or creating specifications for janitor’s closets—have been passed in at least 24 states. In 1992, 17 facilities provided abortions in Louisiana. By 2018, there were three.

At least 20 percent of people seeking abortion care have to travel at least 43 miles. But if a pregnant person lives in rural parts of Montana, Texas, Wyoming, North Dakota, South Dakota, Nebraska, or Kansas, they have to travel more than 180 miles. And due to unnecessary regulations like mandatory waiting periods, mandatory counseling, and forced ultrasounds, those traveling long distances to receive care also have to secure funds for lodging, child care, meals, and other expenses. When nearly half of those seeking abortion care live below the federal poverty line, that’s simply impossible.

With the continued survival of Roe v. Wade now reliant on a conservative-majority Supreme Court, the realities of abortion access—especially for Black people, brown people, and people living in rural areas—have been overlooked. But make no mistake: Roe exists in name only for many pregnant people, especially the most marginalized among us. And the 2020 election proves that if more isn’t done to protect abortion at the state level, in every state, then more people will be forced into parenthood via anti-abortion laws and regulations. Being a mother will continue to be less of a choice and more of a punishment for some people, hinging on where you live and how much money you have.

“Later abortion patient advocates told our stories, and while every story is unique, we all centered one simple truth: abortion bans are harmful,” said Erika Christensen, an abortion storyteller who had an abortion after 31 weeks’ gestation when her doctor told her the fetus she was carrying—she called him Spartacus—was incompatible with life.

“Colorado still has a ban on public funding for abortion and a parental notification law, both of which push care out of reach. We hope the results from Prop 115 can pave the way for bold, proactive measures that protect abortion care and dismantle remaining barriers.”