Trump's pick (L): As much as the GOP tries to co-opt the “Notorious RBG” nickname and apply it to Amy Coney Barrett, it won’t stick. Barrett hasn’t spent her life fighting for the rights of others as Ginsburg did. Instead, she’s notorious for loving guns, hating abortion, and wanting to undo health care for millions of Americans.

Biden's pick (R): Ketanji Brown Jackson could truly carry on RBG’s legacy. Before being nominated to the bench by Obama in 2013, Jackson worked as a federal public defender and appellate litigator. She worked at the U.S. Sentencing Commission when it finally reduced crack cocaine sentences retroactively. As a judge, she ruled that Trump’s former White House counsel, Don McGahn, had to comply with a subpoena, saying “presidents are not kings.” Getty Images 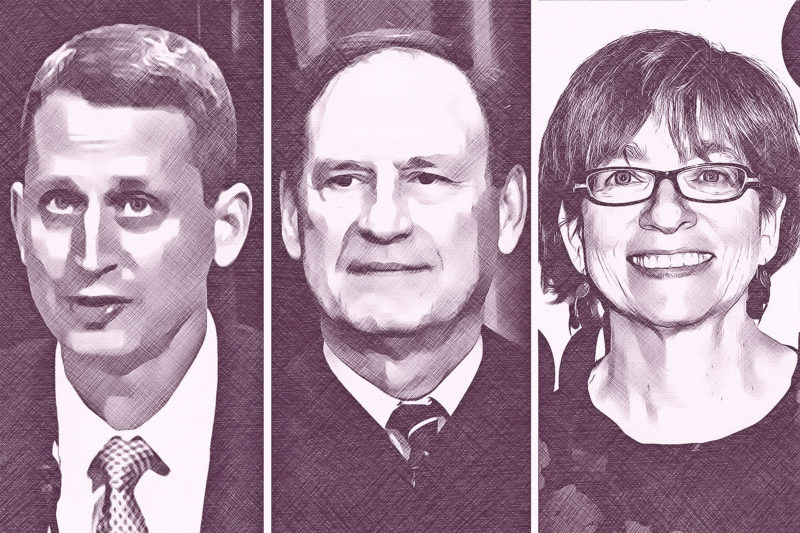 Trump's pick (L): Like Alito, Kyle Duncan is a culture warrior. A Federalist Society stalwart, he’s worked for the Becket Fund representing Hobby Lobby and for the Alliance Defending Freedom limiting rights for LGBTQ people. He ruled that Texas could impose an abortion ban during the pandemic. At 48, he could be on the Court for decades.

Biden's pick (R): Where Alito has spent his career tearing employee rights down, Chai Feldblum has spent hers building them up. She helped draft the Americans with Disabilities Act and the Employment Non-Discrimination Act, and she served two terms on the Equal Employment Opportunity Commission. She’d also be the first openly lesbian person on the Court. Getty Images Biden's pick (R): Thomas doesn’t think racial discrimination is pervasive. Michelle Alexander knows it is. Since finishing law school, she’s been a tireless advocate for racial equality, leading a chapter of the ACLU’s Racial Justice Project and representing plaintiffs in race- and sex-discrimination cases. She’s the author of The New Jim Crow, which showed how mass incarceration locks Black people out of opportunities for generations. Getty Images Trump's pick (L): Another Federalist Society pick, the Eighth Circuit’s David Stras believes companies have a free speech right to refuse service to same-sex couples. He also thinks it’s fine to charge someone with manslaughter for drug use while pregnant if it contributed to the death of their newborn child. His viciousness stands in stark contrast to Breyer, the Court’s leading anti-death penalty voice.

Biden's pick (R): The conservative majority has obliterated antitrust law, but Justice Breyer has stood firm in protecting consumers. Tim Wu, who currently teaches at Columbia Law School and used to work at the Federal Trade Commission, literally invented the term “net neutrality.” His scholarship on antitrust law and the need to break up the big tech monopolies underpinned Sen. Elizabeth Warren’s proposals during the primary. Getty Images/YouTube Trump's pick (L): Unlike many other Trump SCOTUS shortlisters, Amul Thapar has experience, having been nominated back in 2007 by George W. Bush. The good news stops there. In criminal cases, Thapar loves to side with the government, imposing strict sentences on hardened criminals like pacifist nuns. But in civil cases where a government agency’s expertise might come in handy, Thapar doesn’t want to defer at all.

Biden's pick (R): Roberts’ signature “achievement” is a decision that destroyed the Voting Rights Act and unleashed a torrent of voter suppression laws. Dale Ho’s job is fixing that. As director of the ACLU’s Voting Rights Project, Ho had the pleasure of beating voter suppression enthusiast Kris Kobach so thoroughly that the court sanctioned Kobach for contempt. Getty Images/YouTube If the Democrats got a couple of extra seats on the Court, who better to add than New York Attorney General Letitia James? She’s been a public defender, a public advocate, and a government watchdog. To top it off, she pried $2 million out of the Trump family when she got their scammy fake foundation shut down.

For over 30 years, Bryan Stevenson has worked to save people on death row. His Equal Justice Initiative represents people facing execution and highlights the racial bias inherent in our application of the law, calling the death penalty the “direct descendant of lynching.” He’s not wrong.
Getty Images

For more on our constitutional rights, check out our special report.

So much is on the line this election, including the fate and future of the Supreme Court. One nomination fight is already underway. Several others could pop up in the coming months and years. Will Republicans create a conservative super-majority? Will Democrats respond by expanding the Court? Just how much impact will the election have?

Here’s a peek at what the future of the Supreme Court could look like after the November presidential election.