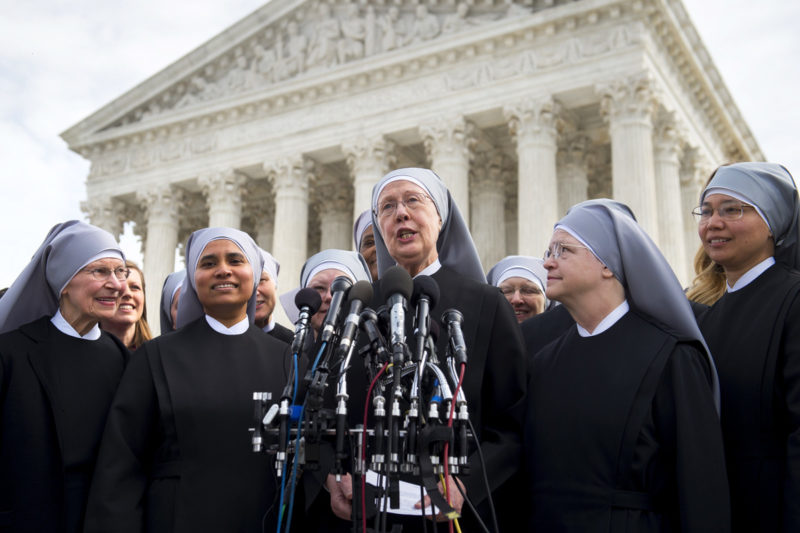 The Little Sisters of the Poor are a Catholic charity that undoubtedly does a lot of good work. But deplorable is the word that comes to mind when I consider their gamesmanship in negotiating their exemption from the birth control benefit with the Obama administration. Saul Loeb/AFP via Getty Images

I have a confession to make.

I’m going to skip all the “Bless me, father, for I have sinned” business and get right to the point: I have contempt for nuns.

Not all nuns, mind you. Give me a nun who likes to twirl on a mountaintop. Or a nun who can fly. Give me Maria from The Sound of Music. Give me any of the Sisters Mary in Sister Act.

But nuns like the Little Sisters of the Poor, who have spent the past few years using their religion as a weapon in order to help a corrupt administration interfere with a health-care benefit to which workers and their dependents are entitled by law?

Nuns like the Little Sisters of the Poor, who, despite having no business even being a party to the messy litigation involving contraception coverage, have somehow become the face of it?

Those nuns can take a long walk off a short pier.

The Little Sisters of the Poor are a Catholic charity that undoubtedly does a lot of good work. But deplorable is the word that comes to mind when I consider their gamesmanship in negotiating their exemption from the birth control benefit with the Obama administration. They clutched their pearls and complained about the Affordable Care Act forcing them to provide birth control coverage in their employee benefit plan, when they were actually not required to provide birth control coverage. It was a cynical strategy meant to tug at the heartstrings of people who just couldn’t believe nuns were being forced to snort powdered birth control.

Nevertheless, the nuns’ cynical strategy paid dividends on Wednesday: In a 7-2 decision, the U.S. Supreme Court blessed the Trump administration’s efforts to expand the exemptions to the birth control benefit in a case called Little Sisters of the Poor Saints Peter and Paul Home v. Pennsylvania. And Clarence Thomas, who penned the majority decision, was more than happy to laud the nuns for persevering in, as he put it, their “fight for the ability to continue in their noble work without violating their sincerely held religious beliefs,” when no such fight was truly necessary.

So what’s my beef with nuns, you might be wondering.

You might think it blasphemy for me to tell a nun to take a hike—and maybe it is—but the Little Sisters have been whining for nearly a decade that the birth control benefit violates their religious beliefs and that they shouldn’t be required to comply with it, even though the Obama administration never tried to force them to comply with it and a 45-year-old law specifically says the government cannot force the nuns to comply with it.

The Obama administration, mindful of the concerns that religiously affiliated employers had about the birth control benefit, created an accommodation that permits them to simply notify their insurers of their objections. That way, their insurers could step in and provide birth control in the religiously affiliated employers’ stead.

But even without this accommodation, there’s a 45-year-old law that says these nuns don’t have to comply with the birth control benefit.

That should have been the end of the discussion.

But it wasn’t. Tactically speaking, it’s easier for conservatives to lean into the narrative that the mean Obama administration was forcing poor innocent nuns to hand out birth control than it was for birth control advocates to explain what ERISA is. Nuns versus a lengthy statute that few people even care about? Advantage: nuns.

Of course, when Obama left office, these nuns could no longer cast themselves as downtrodden victims of a godless president. And so they pivoted to become warriors for the Trump administration, which, stacked with religious conservatives, began to make good on its promise to roll back reproductive rights. When Trump announced new rules in October 2017 that granted any employer—not only religiously affiliated employers—the right to claim not just a religious objection to providing contraceptive coverage, but a moral one as well, the Little Sisters apparently decided it was time to squad up to protect Trump.

And that’s what the Little Sisters’ involvement in this lawsuit has been about: acting as a human shield for Trump’s regressive policies.

In other words, we still don’t know whether Trump can move forward with the particular exemptions he proposed in October 2017. That’s a fight for another day. (And if Joe Biden wins in November, a fight we won’t ever have to have.) Let’s hope if that day comes, and these nuns rear their habited heads to put a charming face on Trump’s regressive policies, we can simply point to ERISA and encourage these nuns to have a seat.

No one is forcing them to provide contraceptive coverage, and it’s time for advocates to more loudly push back against that claim. Besides, isn’t there something in the Bible about bearing false witness?

Just continue your laudable work caring for the elderly and the disabled, and stop complaining.