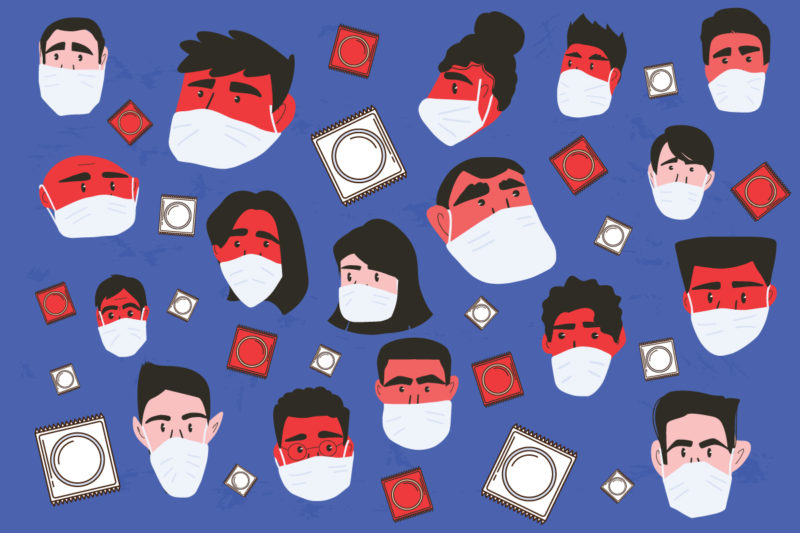 As we try to normalize wearing masks, as is recommended by the Centers for Disease Control and Prevention, I believe we will come up against yet another problem that has plagued condom advocates for years: People don’t like them. Shutterstock

I have been a condom evangelist for much of my life—and now I may be a face mask evangelist.

As a young person coming of age during the height of the HIV and AIDS epidemic, I got my first condom lecture in seventh grade and took to heart the advice to always use them. As a peer educator in college, I’ve stood in front of rooms full of incoming freshmen and fraternity brothers and demonstrated how to put a condom on a plastic banana, with the promise that it wouldn’t ruin sex. And now, as a professional sex educator, I’ve combated misinformation from abstinence-only programs, corrected doctors who inadvertently misstate efficacy rates, and called out public health experts who seem to deliberately throw condoms under the bus to promote “better” methods of pregnancy prevention.

Over the past month, I’ve been watching the debate unfold over protective face masks and grappling with my own questions about when my children and I need to wear one. I can’t help but notice the similarities to the condom debate—from confusion about efficacy to the intense political entrenchment, it feels like I’m experiencing déjà vu.

While there are still barriers to access for many, condom usage has increased over the past few decades, which is heartening. And there are certainly lessons to be learned from that fight that we could apply to today.

To state the obvious, condoms and face masks are both protective coverings that, if worn properly and used consistently, can reduce the risk of disease transmission. With condoms, it has never been as simple as just telling people to use them, and it won’t be with masks either.

To properly protect yourself from anything, you must first understand that you are at risk—and people consistently underestimate their own risk of getting a sexually transmitted infection (STI), just like many underestimate their risk of getting COVID-19. In the early days of the HIV epidemic, the public clung to the idea that only gay men and people with drug addiction had to worry about HIV/AIDS. We see a parallel today when it is suggested that only the elderly and people who are immunocompromised need to fear the coronavirus, a suggestion that implies that those people are expendable in some way. This type of stigmatization of disease (or vulnerability to disease) is harmful because using protective gear gets equated with weakness, which might be why the president and vice president seem so resistant to wearing masks.

Efforts to promote condoms to help prevent sexual transmission of HIV and other sexually transmitted diseases (STDs)—through education, advertising, and counseling—have always been politicized. Conservatives would rather blame infection on the immorality of those having sex than promote safe sex practices. They have derided sex education that taught about condoms as giving young people permission to be promiscuous. They’ve pushed abstinence-only programs, despite decades of research showing that these don’t work, and have gone of their way to convince people that condoms are ineffective—using flawed logic and junk science to back up these claims.

It seems that some of the same vocal figures who push for abstinence are now standing up for people’s right to go out in public without a mask. But their argument isn’t that people should avoid all risk by staying home, it’s that they should be allowed to make their own choices. For some, not wearing a mask has become a protest of government overreach and a signal of a certain set of political beliefs.

As we try to normalize wearing masks, as is recommended by the Centers for Disease Control and Prevention (CDC), I believe we will come up against yet another problem that has plagued condom advocates for years: People don’t like them. The poster child of safe sex is also seen as the enemy of “good” sex, though I would argue that knowing you’re protected can make the sexual experience better. Plus, condoms keep getting better, and the willingness to use one is a sign that you are a caring partner.

Face mask advocates have an uphill battle. On top of the mixed messaging about wearing masks from politicians, masks can be unpleasant to wear: They can pull behind the ears, irritate sensitive skin, fog up glasses, and get damp from our breath.

The messages that I got during the HIV and AIDS epidemic were unequivocal: Use a condom every time you have sex, with every partner, until you are in a mutually monogamous relationship and have both been tested. Of course, this is no longer the best message for HIV prevention (we now know more about risk, and there are more treatment and prevention options), but these early messages helped shift long-held ideas about condoms and helped to steadily increase use over the next few decades.

The lack of clear directives about face mask usage have hurt compliance. The CDC has walked back initial suggestions that masks should only be worn by people who were already sick and replaced them with guidelines that leave a lot open to interpretation. In my town in New Jersey, this has led to fierce debates about whether we need to wear a mask when we’re walking the dog or jogging—and publicly shaming those who don’t.

When arguing for face masks, we need to keep our messages simple. Public health messages are nuanced and can change with the arrival of new data, but doesn’t translate well during a crisis (or on social media).

People need to see clear numbers. My favorite statistic from early HIV research found that using a condom reduces the risk of exposure by 10,000 times.

We’re still in the early days of research on the impact of face mask use on COVID-19 spread, but we can get ahead of the confusion by using straightforward messages and easy visuals whenever possible. And as tempting as it is to berate people for daring to step off their property without a mask, we need to remember that shame hasn’t exactly been effective in motivating people to wear condoms. As infectious disease epidemiologist Julia Marcus pointed out in her recent article for the Atlantic, abstinence-only sex education and shaming do not eliminate risky behavior and can backfire.

The political movement will be harder to combat; there are some people who seem to have staked their identity on their right to not shelter in place, not to wear a mask, and open businesses back up. And evidently they are being propped up by a well-funded conservative coalition. As tempting as it is to argue with people who hold these beliefs, it’s more important to make sure that these people don’t control the conversation or spread misinformation with impunity.

Comparing condom use and face mask use only goes so far. HIV, and STIs generally speaking, is not nearly as easily transmitted as the coronavirus, and condoms are far more effective than most face masks. And the decision to use a condom only impacts the health of sex partners, which is why so many condom interventions have focused on negotiation skills to help empower partners (women in particular) to insist on condom use.

Masks are different. We’ve been told that wearing a mask will mostly protect those around you rather than to keep yourself healthy—my mask protects you while your mask protects me. Theoretically if everyone wears them, everyone benefits—and ultimately we reduce the risk and rate of transmission. But the self-interest is less immediately obvious, and there is no direct negotiating with random people in line at the supermarket (though many will undoubtedly try).

We’re essentially asking everyone to sign a social contract for the good for the community—a tough request even in less divisive times. Still, I believe we can learn from decades of condom promotion that can help us sell this social contract, as long as the research continues to find it beneficial.

Once upon a time, condoms were presented as a solution to an emerging epidemic that we did not yet understand. Since then, condoms have been simultaneously exalted, vilified, and politicized—but they have also been used. A lot. According to the National Survey of Family Growth, the amount of sexually active women whose partners had ever used a condom increased from 52 percent in 1982 to 95 percent from 2011 to 2015.

Condom use is now a nearly universal experience, which makes this condom evangelist very happy. Up next: face masks.