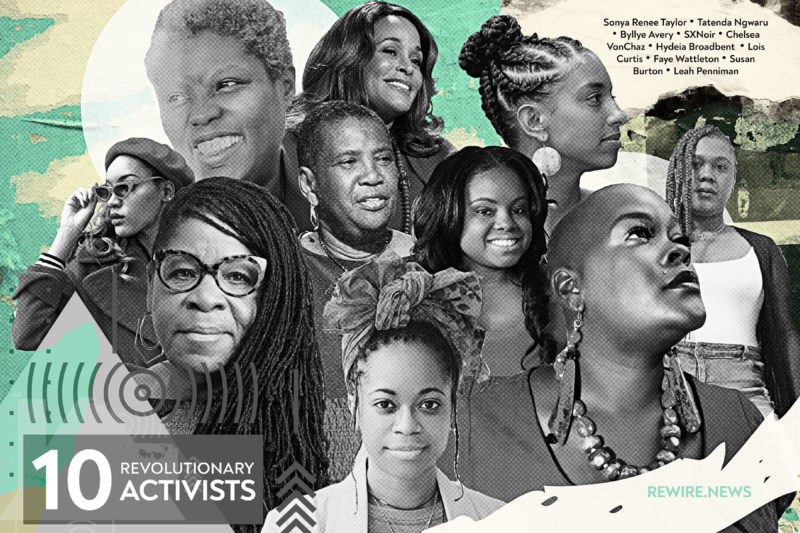 No matter the month, it is important that we appreciate the revolutionary Black activists who recognize that the only true way to progress is through the continuous fight for equity and community building. Rommy Torrico/Rewire.News

No matter the month, it is important that we appreciate the revolutionary Black activists who recognize that the only true way to progress is through the continuous fight for equity and community building.

In honor of the ongoing fight for collective liberation and, of course, Black History Month, Rewire.News is showcasing ten activists who have paved a path toward reproductive freedom, bodily autonomy, radical self-love, and systemic change. These leaders and activists, whether they are well-known or emerging, are all helping to create an equitable and just future.

Byllye Avery is a reproductive justice and health-care activist who has devoted her life to advocating for the health and wellness of low-income Black women. After being diagnosed with an autoimmune disease and losing her husband to a heart attack in his thirties, Avery observed the mistreatment and misrepresentation of the Black community in health care. Avery felt compelled to give Black women more inclusive health care and co-founded the Gainesville Women’s Health Center in Gainesville, Florida, in 1974. The center helped give low-income Black women access to reproductive health care and safe abortions. Ten years later, Avery founded the National Black Women’s Health Project, now the Black Women’s Health Imperative, which won her a MacArthur fellowship, among other prestigious awards. Avery goes down in history as an unwavering advocate for Black women’s health and a reproductive justice pioneer.

“Change provides us with experiences that we convert to personal power.” —Byllye Avery

Born HIV-positive, Hydeia Broadbent began her activism at the early age of six by giving public speeches and even guest-starring on an AIDS special on Nickelodeon in 1992 alongside Earvin “Magic” Johnson. Her passion caught the attention of Oprah Winfrey, who had her appear on her show in 1996 when she was 11 years old. On the show, she brought awareness about the disease and became one of the only children to publicly speak out about being born HIV-positive. Decades later, as an adult, Broadbent remains an adamant activist and educator for HIV and AIDS and continues to break down the stigma surrounding the virus.

“AIDS is something that happened to me but does not define who I am as a person.” —Hydeia Broadbent

In 1998, renowned prison reform activist Susan Burton founded A New Way of Life Reentry Project, a Los Angeles-based nonprofit that provides recently incarcerated women with legal services, housing, and mentorship. Burton was inspired into her line of work after being incarcerated multiple times following the death of her 5-year-old son in 1982. Each time she left prison, she found herself lacking the proper resources to reenter society and was in a cycle of drug addiction and incarceration.

Burton’s tireless work to reform the prison system landed her an appointment on the Los Angeles County Sybil Brand Commission for Institutional Inspections, which authorizes her to inspect Los Angeles prisons and suggest improvements to provide inmates with a better quality of life.

“Unless we address those that are leaving prisons, we can’t begin to repair the damage of mass incarceration and make our communities whole and healthy once again.” —Susan Burton

Lois Curtis is a disability rights activist and painter who was diagnosed with developmental disabilities at a young age. Growing up, Curtis’ family lacked the resources to support her, and from 11 to 29 years old, she was sent to live in Georgia Regional Hospital, a mental institution for people with disabilities. In 1995, Curtis and Elaine Wilson, another woman with disabilities, sued Tommy Olmstead, the commissioner of the Georgia Department of Human Resources, for violating the Americans With Disabilities Act by keeping them in the hospital when they could live in the community. In 1999, the case went before the U.S. Supreme Court, and the women won what is now known as the Olmstead decision, giving people with disabilities the rights and support needed to live in the community of their choice. The Supreme Court decision established one of the most important precedents for the respect and humanity of all people with disabilities.

Originally from Zimbabwe, Tatenda Ngwaru is an intersex activist and the founder of True Identity, Zimbabwe’s first organization for intersex people. Ngwaru was raised as a boy until she was a teenager and struggled with her gender identity before learning during an examination that she had female reproductive organs, which led to her discovery that she is intersex. While running True Identity, she experienced hostility from her community over her transparency about her gender identity and advocacy for intersex education, and she was forced to seek asylum in the United States. Now based in Boston, Ngwaru still advocates for the visibility of intersex people in the media and was the subject of a documentary about her journey as an intersex woman and asylum seeker.

“I am a Black woman; I am an immigrant; and I’m an intersex woman. That is something that is just built automatically to destroy me, but from that, I rise.” —Tatenda Ngwaru

Leah Penniman is a food justice activist and co-founder of Soul Fire Farm. As a biracial woman growing up in a majority-white neighborhood, it was difficult for Penniman to understand her racial identity, so she found solace in nature. At the same time, she still felt out of place with her appreciation of nature because she only saw white people being represented as caretakers of the land. As a teenager, Penniman participated in a program called The Food Project, which empowered her to see the sovereignty and beauty of farming in urban communities. She now educates Black and brown communities on farming.

In 2011, Penniman co-founded the Soul Fire Farm, a community farm with a mission of ending the systemic oppression of Black and brown people in the food system. The farm also provides agricultural training and distributes fresh produce to communities in food deserts. Penniman believes in the importance of teaching Black communities about the long relationship between people of the African diaspora and the practice of agriculture. Her 2018 book Farming While Black highlights these ancestral ties.

“When we as Black people are bombarded with messages that our only place of belonging on land is as slaves, performing dangerous and backbreaking menial labor, to learn of our true and noble history as farmers and ecological stewards is deeply healing.” —Leah Penniman

SX Noir is a sex-positive and sex workers’ rights activist who works to destigmatize sex and sex work. Some may remember her as the sex work activist who confronted actress Ashley Judd at The Wing, a members-only coworking space, for her anti-prostitution comments.

After seeing so many of her friends disrespected as sex workers, SX Noir made it her mission to promote more awareness around the intersections of sex, love, technology, culture, and health. Most recently, Noir launched a podcast called Thot Leader that focuses on topics such as mobility in the sex industry and the need for empathy in digital spaces. By using the power of tech, SX Noir expands her scope of influence to challenge old and traditional outlooks on sex work.

“Someone wrote these rules that we have to follow in digital spaces. This isn’t ‘The Wild Wild West.’ When you have platforms like Facebook and Instagram that are actively pushing out queer people, that actively push out people that are different—that’s not magic; that’s written by someone. I wanted to be the person on the inside fighting for people who were just different.” —SX Noir

Sonya Renee Taylor is an author, spoken word poet, educator, social justice activist, and the creator of The Body Is Not an Apology, a digital media platform and international movement founded in 2011 that teaches radical self-love and body empowerment. Her online community and her 2018 book with the same name, The Body is Not An Apology: The Power of Radical Self-Love, have reached a global audience, providing people with tools to shed internalized body shame in order to embrace all bodies as deserving of rights, love, and care.

Taylor provides the body positivity movement with an intersectional perspective that factors issues such as race and disability into the conversation. She currently serves on the boards for pioneering reproductive justice organization SisterSong and national poetry nonprofit Split This Rock.

“Radical self-love demands that we see ourselves and others in the fullness of our complexities and intersections and that we work to create space for those intersections.” —Sonya Renee Taylor

Chelsea VonChaz is a period poverty activist, who was inspired to create her company #HappyPeriod after seeing women experiencing homelessness on the streets of Los Angeles with blood-stained undergarments. In this critical moment, she knew she had to do something to ensure no one would have to go without proper menstrual hygiene. She founded #HappyPeriod in 2015 with the help of her mother and friends when they began passing out menstrual hygiene kits to the population in Los Angeles who are homeless. Now there are chapters in New York City, Atlanta, Miami, San Diego, Chicago, and Washington, D.C. VonChaz is not only making direct impact but is also sparking a conversation around period poverty and sex education.

“Women of color, we talk less about our periods. I’m paying more attention when it comes to different cultures and ethnicities as far as managing menstruation and talking about it. We [people of color] are still stuck in this whole ‘taboo’ thing.” —Chelsea VonChaz

Faye Wattleton is a reproductive justice activist and the first black president of Planned Parenthood. While she was studying for her master’s degree in maternal and infant care at Columbia University, she was inspired into activism after witnessing the dangerous complications and impacts of unsafe abortions on patients. In 1978, she joined the Planned Parenthood Federation of America as their youngest and first Black president and also the first woman president since Margaret Sanger. During her tenure, she, along with a supportive network of like-minded Black women, lobbied against court rulings such as Webster v. Reproductive Health Services, with a collective statement arguing for equitable abortion access. Wattleton left the organization in 1992, but her impact on the fight for reproductive freedom continues to be recognized.

“Reproductive freedom is critical to a whole range of issues. If we can’t take charge of this most personal aspect of our lives, we can’t take care of anything. It should not be seen as a privilege or as a  benefit, but a fundamental human right.” —Faye Wattleton