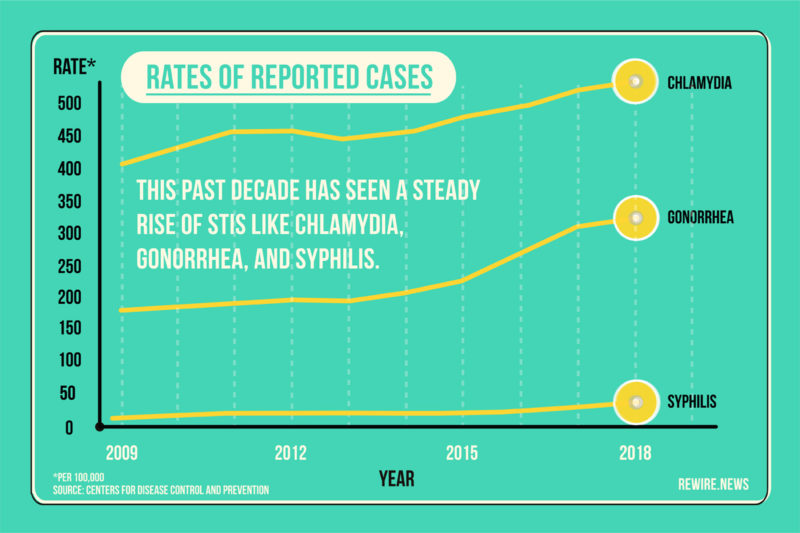 This past decade has seen a steady rise of STIs like chlamydia, gonorrhea, and syphilis. Shutterstock

As state legislative sessions kick off this month, advocates will push for improved sexuality education policies to curb the alarming rates of sexually transmitted infections and diseases (STIs and STDs) among young people.

States like Montana—where gonorrhea numbers are at a 40-year high—and Michigan have reported surges in STIs like chlamydia, syphilis, and gonorrhea. These reports are part of a national trend.

The rise in STIs has a number of causes: cuts to state and local health departments, drug use, poverty, stigma, and decreases in condom use among young people. Advocates see this last factor as further proof that sex education is failing to give teens the information and skills they need to protect themselves.

STDs Are Rising (and Condom Use Is Falling)

In 2018, nearly 2.5 million cases of chlamydia, gonorrhea, and syphilis were reported in the United States. The rates for each of these infections have been steadily rising over the past decade, and young people bear a lot of the burden. People ages 20 to 24 had the highest reported rates of both chlamydia and gonorrhea in 2018.

Matthew Prior, communications director at the National Coalition of STD Directors, described the factors playing into the STI epidemic as a “perfect storm”: “Condom use is down among young people; it’s easier than ever to meet partners via apps; and federal investment in STD prevention has been effectively cut in half in the past 15 years,” he told Rewire.News. “These reasons, coupled with the failure to arm our young people with the facts via scientifically accurate sex ed, are contributing to the raging STD epidemics, and all but guarantee we will see these rates continue to rise.”

While the aforementioned infections are curable, they often have no symptoms and can go undetected without routine screening. If left untreated in young women, they can lead to pelvic inflammatory disease and infertility. The CDC estimates that undiagnosed STIs cause 24,000 women to become infertile each year. And gonorrhea is becoming increasingly hard to treat, as the bacteria responsible for the infection is growing resistant to the antibiotics we have available.

Condoms are highly effective protection against chlamydia and gonorrhea because they prevent the exchange of bodily fluids that transmit these infections. Unfortunately, there has been a steady decline in condom use among young people over the past two decades. The percentage of sexually active high school students who reported using a condom the last time they had sex fell from 63 percent in 2003 to 54 percent in 2017, according to a recent survey.

“Young people need sex education that not only includes information about the prevention [of] STI[s], but also builds their skills to communicate effectively about boundaries and desires, negotiate condom use, and routinize STI screening,” Advocates for Youth President Debra Hauser told Rewire.News. “Unfortunately, many schools omit important lessons on condom use in the misguided fear of provoking controversy. This omission stigmatizes condoms and leaves many youth more vulnerable.”

In truth, what young people learn in sex education can vary from classroom to classroom. It depends on how well the teacher was trained, how comfortable they are with the topic, how much time they are given, and what curriculum and resources are chosen by the school district. And many of these factors are influenced by state laws.

“Policies often dictate what educators can—and cannot—teach in the classroom,” Jennifer Driver, vice president of policy and strategic partnerships at SIECUS: Sex Ed for Social Change, told Rewire.News. “When a comprehensive policy is enacted, educators are given the green light to provide students with medically accurate, age-appropriate, and inclusive lessons on how to avoid STIs whenever they decide to become sexually active.”

Some state policies inhibit what teachers may discuss in the classroom or even require them to provide biased information. According to the Guttmacher Institute, 19 states require schools that teach sex education to provide instruction on the importance of engaging in sexual activity only within marriage, while seven states require instruction include a discriminatory view of sexual orientation.

Other states inhibit sexuality discussions even more. In Michigan, abortion cannot be discussed as a method of contraception or “reproductive health,” and schools face losing funding if an official makes an abortion referral. Mississippi’s law specifically targets condoms by prohibiting demonstrations of their application and use in school. Other state laws include confusing language about condom demonstrations, so many schools “err on the side of not doing them,” Driver said.

And Utah law prohibits teachers from providing instruction or answering spontaneous questions about anything that might “encourage the violation of any state or federal criminal law.” Until last spring, consensual sex outside of marriage was illegal in Utah.

Advocates across the country have worked for years to update and improve sex ed laws, and policies with some success—17 states now require sexuality education to be medically accurate, a direct result of these ongoing efforts.

SIECUS is working with three Alabama-based advocacy groups—Alabama Campaign for Adolescent Sexual Health, Yellowhammer Fund, and URGE Alabama—to update and improve the state’s sex ed law. (Alabama ranks 15th among states for highest rates of chlamydia and fourth for gonorrhea, yet the state’s policy is outdated and focused on abstinence.)

Alabama also requires schools to emphasize “in a factual manner and from a public health perspective, that homosexuality is not a lifestyle acceptable to the general public and that homosexual conduct is a criminal offense under the laws of the state.” This language, codified into law, is inaccurate, harmful, and stigmatizes LGBTQ communities.

In 2019, state Sen. Thomas Whatley (R-Auburn) introduced a bill that would have gotten rid of this language on homosexuality and required all sex ed instruction and material to be “medically accurate and culturally appropriate.” The bill, which also revised outdated language about HIV and AIDs, passed the Alabama Senate but died in the house. Advocates hope to reintroduce the bill this legislative session.

“We cannot ignore how imperative it is right now for us to implement medically accurate, non-judgmental sexual health education that treats all teens with dignity and respect,” Mia Raven, policy director of the Alabama-based Yellowhammer Fund, told Rewire.News. “With this proposed legislation, we could make actual headway in protecting the physical and mental health of the youth of Alabama, as well as their future fertility.”

A similar bill introduced in Minnesota last year is still winding its way through the legislature. If passed, it would require sex ed courses be medically accurate and task the education department with creating a curriculum that covers topics including contraception, sexual orientation, gender-based violence, and affirmative consent. Unsurprisingly, the bill sparked controversy among conservative groups.

Similar bills are anticipated this year in Massachusetts and Virginia, Driver said.

While the bills may face uphill political battles, Driver believes they are an important place to start. “Implementing comprehensive sex education policy is a critical step toward reducing STI rates in any community,” she said.