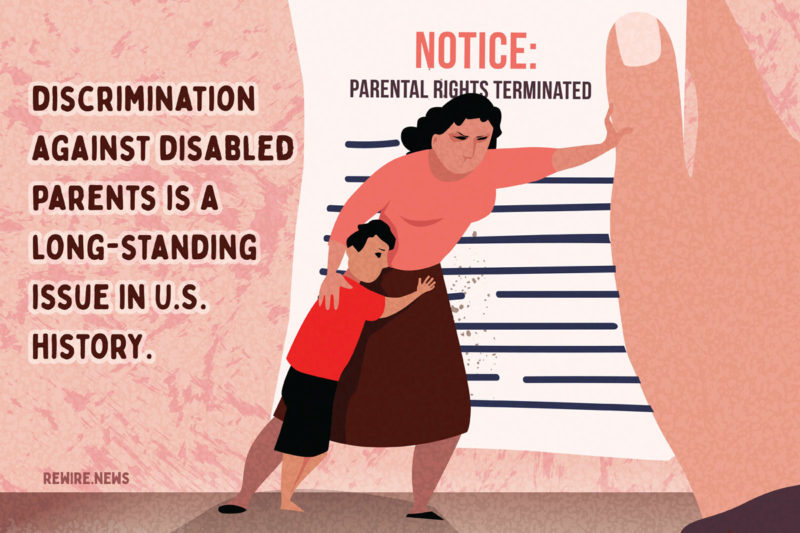 Such discrimination is a long-standing issue in U.S. history, rooted in eugenics practices like intelligence tests and other standards that, historically, have resulted in children being removed from families and forced sterilization of those with—or those perceived to have—disabilities. Shutterstock

Last week, the U.S. Department of Health and Human Services (HHS) Office for Civil Rights (OCR) announced an agreement with the state of Oregon to develop a system to ensure the state’s child welfare agency does not discriminate against parents with disabilities, a move that could benefit one in ten parents in the United States.

The agreement stems from a case involving Amy Fabbrini and Eric Ziegler. Fabbrini and Ziegler endured a five-year battle with the state of Oregon to regain custody of their two sons, who were both taken into foster care after their respective births following concern that Fabbrini and Ziegler would be unable to care for them.

No abuse was alleged against Fabbrini and Ziegler, who say their below-average scores on state-sanctioned IQ tests are why Oregon held the children in foster care until their court-ordered releases in late 2017 and early 2018.

Fabbrini and Ziegler’s case is not unique. At least 40 percent to 80 percent of parents in the United States with intellectual disabilities will lose custody of their children, according to a 2012 report from the National Council on Disability, on which I was the primary author.

This discrimination is not only harmful to families—it is also unlawful. Indeed, both Section 504 of the Rehabilitation Act and the Americans with Disabilities Act (ADA) prohibit child welfare agencies and courts from discriminating against disabled parents.

These federal laws also require child welfare agencies and courts to provide reasonable modifications in policies, programs, and procedures to ensure disabled parents are offered an equal opportunity. For example, Deaf parents must be provided sign language interpreters, and parents with intellectual disabilities should receive individualized services based on the family’s needs.

Such discrimination is a long-standing issue in U.S. history, rooted in eugenics practices like intelligence tests and other standards that, historically, have resulted in children being removed from families and forced sterilization of those with—or those perceived to have—disabilities.

Roughly two-thirds of state child welfare laws still allow for a parent’s disability to be considered for the purposes of terminating parental rights, according to the National Council on Disability. Tellingly, researchers from the University of Minnesota found that nationally, 19 percent of children in foster care had been removed from their homes at least in part because they had a disabled parent. That same study found parents with disabilities had 22 percent higher odds of having their parental rights terminated, compared to other parents. And, a recent study found that parents with psychiatric disabilities were eight times more likely than other parents to have involvement with the child welfare system.

The belief that disabled people are unfit parents dates back to the eugenics movement in the early 20th century, when people with disabilities and others who were deemed “unfit to procreate” were forcibly sterilized. This barbaric treatment even gained the blessing of the U.S. Supreme Court in the 1927 Buck v. Bell case, which held it was constitutional to sterilize people with disabilities forcibly. This alarming decision led to more than 30 states enacting laws that permitted involuntary sterilization, and an estimated 70,000 Americans, many of whom had disabilities, sterilized against their wishes.

But studies do not indicate that parents with disabilities are more likely than nondisabled parents to abuse or neglect their children. In fact, research has consistently found that most disabled parents and their families fare quite well when provided the chance. Studies have shown that a lower IQ has nothing to do with one’s fitness as a parent. IQ scores themselves are rooted in flawed methodology and have been used to justify racist and eugenics practices. Further, some scholars contend that there are ways in which children actually benefit from having a disabled parent, such as exhibiting increased empathy.

As a result of the new agreement, the Oregon Department of Human Services (DHS) must now review ten other cases concerning parents with disabilities to discern if each were handled properly. In the voluntary resolution agreement, the state agency promises to make decisions about removing children from their parents “based on actual risks that pertain to the individual parent and not on mere speculation, generalizations, or stereotypes about individuals with disabilities.” In other words, the state should only remove children if there is actual abuse or neglect, and not simply because their parent is disabled.

Such reasoning led to the removal of Fabbrini and Ziegler’s first-born son, Christopher, in September 2013. Within days of bringing him home from the hospital, Fabbrini’s family contacted DHS, expressing concerns that the couple’s intellectual disabilities made them unable to care for their infant. DHS agreed and placed Christopher in foster care.

In order to regain custody, DHS required the couple to complete parenting and nutrition classes, and learn CPR and first aid, and they did. They also underwent psychological evaluations and participated in supervised visitation with Christopher.

Despite the parents’ resolve, the then-1-year-old remained in foster care. In 2015, the couple’s lawyer filed a motion to return him to his parents, arguing there was no current threat of serious loss or injury to the child. It was denied.

Four years later, in February 2017, the couple gave birth to their second child, Hunter. This time, DHS immediately put him in foster care while Fabbrini was still in the hospital. Meanwhile, the parents’ battle for custody of their children persisted.

In court, the state’s arguments centered on the parents’ cognitive and “executive functioning” skills. The average IQ score is between 90 and 110; Ziegler’s IQ tested at 66, Fabbrini’s at 72. DHS focused in court proceedings on the parents’ cognitive skills and “executive functioning,” citing, among other things, the parents’ failure to read to their sons or use sunscreen on the boys, and feeding them chicken nuggets as a snack. The state also accused the parents of asking both too many and too few questions about parenting matters.

According to the settlement, DHS promises to give parents with disabilities the same opportunities to reunify their families as nondisabled parents, such as ensuring they have access to family supports. DHS will also update its nondiscrimination policy,  designate an employee to oversee compliance with the ADA, provide training about working with disabled parents to all staff, establish a grievance procedure for complaints alleging disability discrimination, and provide regular progress reports on its efforts to OCR.

While this is not the first time the federal government has investigated a case involving discrimination by the child welfare system against parents with disabilities, it is the first time they have done so in three years.

In November 2012, the Massachusetts Department of Children and Families (DCF) placed a newborn baby in foster care after Sara Gordon, a mother with an intellectual disability, experienced trouble with feeding and diapering. While many new parents have similar challenges, state officials determined that Gordon “was not able to comprehend how to handle or care for the child due to the mother’s mental retardation.”

Such actions were discriminatory and unlawful, according to a January 2015 joint letter of findings issued by the OCR and U.S. Department of Justice (DOJ). Specifically, the departments investigated Gordon’s case and found DCF violated both the Rehabilitation Act and the ADA by discriminating against Gordon based on her disability and denying her support and services to assist her in caring for her daughter.

Two months later, Gordon and her daughter were reunited.

By the end of the year, OCR entered into a voluntary agreement with the Georgia Department of Human Services related to foster parents with disabilities.

Groups such as the Arc and the National Council on Disability have praised OCR for its recent agreement with Oregon. “We are glad to see federal regulators reject stereotypical and discriminatory beliefs about the abilities of parents with [intellectual and developmental disabilites] to care for their children, particularly when considering the history of discrimination, including involuntary sterilization,” said Peter Berns, CEO of the Arc.

While efforts like the agreement are important, however, questions remain about how much change it can really effectuate.

Attention to the rights of parents with disabilities is, of course, significant. And involvement by the federal government should hold some weight. Nonetheless, the Oregon agreement is voluntary and does not establish any sort of legal precedent. So far, it’s unclear if there are penalties if Oregon were to fail to adhere.

Further, unlike the letter of findings issued in the Gordon case, this agreement explicitly states it should not be construed as an admission that the state violated federal disability rights laws.

What happened to Fabbrini and Ziegler, as well as Gordon and countless other couples, must end. Families shouldn’t be torn apart because of antiquated beliefs about the fitness of disabled people to raise children. Further, states must be held accountable when they break federal law.

But under the Trump administration, disability rights have been under constant siege. And, by not explicitly stating that Oregon violated both the Rehabilitation Act and the ADA, the federal government’s silence in this case may be just another example of the administration not doing enough.