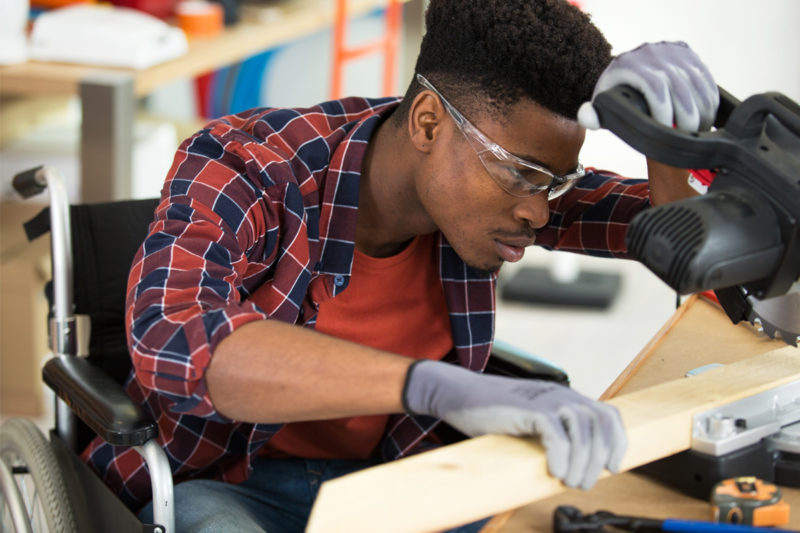 Even when people with disabilities do work, they earn far less than their nondisabled peers. According to the U.S. Census Bureau, disabled people earn 66 cents for every dollar people without disabilities receive. Shutterstock

With the election season underway, 2020 Democratic presidential candidates are putting forward plans to address issues surrounding income inequality. However, little attention has been paid toward how the candidates will increase employment opportunities for people with disabilities if elected. As it is National Disability Employment Awareness Month, October is the perfect time to acknowledge employment—or more to the point, unemployment—among people with disabilities.

One in four adults in the United States, or 61 million people, have a disability, according to the Centers for Disease Control and Prevention. Despite being a sizable population, people with disabilities continue to face significant challenges in gaining and maintaining employment.

First, discrimination against disabled employees—both implicit and explicit—remains a significant challenge. My earliest experience with this sort of discrimination was in 2003, when I graduated from college. As a social work student, I completed three internships and graduated with high honors. On paper, I was the “ideal candidate.” I had no difficulty getting job interviews. In fact, many employers commented on my qualifications when calling to set up interviews, noting that a meeting was “just a formality.” However, that all changed once I rolled into interviews in my power wheelchair. Some employers were quite obvious with their concerns about how I would perform the job. One employer even asked how I would empty the trash at the end of the workday—something that surely was not an essential function of a social worker. However, most employers were less explicit in their discrimination, simply never calling back and ignoring my emails. In the end, it took more than 30 job interviews for me to find a job.

Unfortunately, my experience was not unique. A 2015 study by researchers at Rutgers University shows that people with disabilities continue to experience widespread discrimination in the workplace. In this study, researchers submitted more than 6,000 job applications for accounting positions. Two-thirds of the applicants disclosed being disabled in their cover letters, while one-third did not. Despite having similar qualifications, the hypothetical applicants with disabilities received 26 percent fewer responses from employers.

Second, people with disabilities contend with policies and programs that disincentivize working. In other words, policies and programs that should support disabled people in living independently and successfully instead force them to remain unemployed and living in poverty. For example, Medicaid is the only health insurer that covers home-based help for disabled people. Unfortunately, however, Medicaid includes strict financial eligibility requirements, which often lead to disabled people having to choose between working and receiving the services they need. Social Security Disability Insurance (SSDI) and Supplemental Security Income (SSI) have similarly stringent income rules.

While there are many reasons for the wage gap, one of the most notable is the fact that some disabled people are paid as little as 22 cents an hour—and it’s completely legal. Enacted over 80 years ago, Section 14(c) of the Fair Labor Standards Act permits employers to pay disabled people a subminimum wage by merely obtaining a certificate from the U.S. Department of Labor. People with disabilities who earn subminimum wages usually work amongst other disabled people in isolated “sheltered workshops.”

What the Candidates Can Do

One meaningful way for candidates to engage people with disabilities is proposing policies to address these persistent employment disparities. Some candidates have begun to do so.

According to Rebecca Cokley, director of the Disability Justice Initiative at the Center for American Progress, “The 2020 election has already seen an unprecedented level of engagement of the disability community by candidates.” All issues are disability issues, meaning that every policy a candidate proposes should include people with disabilities, Cokley explains.

Nearly all Democratic candidates have expressed their support for raising the federal minimum wage to $15 per hour, which could have important implications for disabled people earning subminimum wages. Indeed, the Raise the Wage Act, which recently passed in the U.S. House of Representatives, includes a provision to eliminate subminimum wages and has the support of most candidates. Similarly, the bipartisan Transformation to Competitive Employment Act, which has been introduced in the U.S. House of Representatives and the U.S. Senate, would phase out subminimum wages and increase employment opportunities for disabled people.

Of course, passing these bills is only the beginning. Addressing employment barriers facing people with disabilities will require a multi-pronged approach, meaning there are lots of areas for presidential hopefuls to consider.

First, candidates must ensure that their administration will steadfastly investigate disability-based employment discrimination and enforce both the Americans with Disabilities Act and the Rehabilitation Act. These two federal disability laws prevent discrimination against disabled people by public and private employers.

Second, candidates must commit to dealing with current policies and programs that disincentivize people with disabilities from working. To that end, income and asset limits for programs such as SSI, SSDI, Medicaid, and the Supplemental Nutrition Assistance Program (also known as food stamps) must be eliminated or increased. Disabled people should not have to choose between earning a living and receiving needed benefits, such as Medicaid, that enable them to live in the community.

Third, Medicare for All or similar government-run, universal health insurance proposals must meet the needs of disabled people adequately, including coverage for home- and community-based services and comprehensive physical and mental health care. Such health insurance programs could enable people with disabilities to work and retain necessary health insurance, but these programs will be meaningless if they overlook our needs.

Fourth, subminimum wages are antiquated and must be eliminated. Thus, all efforts to raise the federal minimum wage must include the repeal of Section 14(c) of the Fair Labor Standards Act. To ensure people with disabilities can obtain competitive, integrated employment, candidates must also develop proposals that expand employment supports.

As National Disability Employment Awareness Month comes to an end, we must celebrate how far we have come toward expanding employment opportunities for disabled people while also recognizing all of the work that remains. Further, with election season in full swing, candidates should take notice: The disability vote is powerful and should not be overlooked.