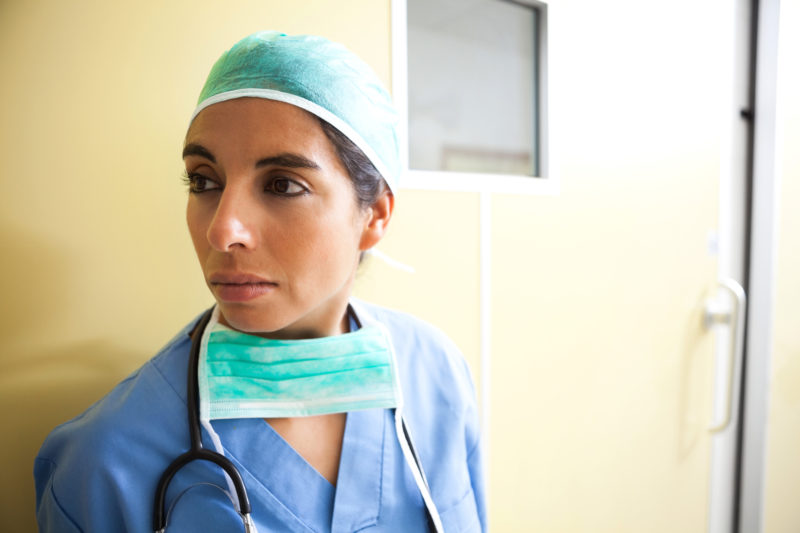 When something comes back as concerning in an ultrasound, doctors order a higher-level scan and additional tests that can take weeks to confirm. It then takes parents time to make a horrible, heart-rending, petrifying decision: continue a pregnancy to term and deliver a baby who will die in their arms, or terminate the pregnancy early and spare everyone additional pain. Shutterstock

When a newborn baby dies in a hospital, it’s because something has gone very wrong.

Either a fetus in utero developed a condition that is “incompatible with life;” a healthy pregnancy has been cut short due to unforeseen factors that were unable to be remedied, such as spontaneous premature labor, potentially fatal maternal conditions, or trauma; or an infant has a significant birth trauma.

None of these situations involves any kind of “execution” of healthy infants. To suggest as much, as President Donald Trump did last weekend, is an intentionally dishonest, cruel, and unusual accusation. These tragedies are never chosen, and every parent going through it suffers greatly. I know, because I’ve seen it.

As a former NICU nurse, I was part of the hospital “bereavement team” that provided loving, compassionate, and holistic care for parents going through the absolute worst days of their lives. The idea that someone would go through the physical, personal, and emotional commitment of pregnancy and parenthood to just flippantly decide to choose an abortion moments before birth or to commit infanticide is ludicrous. It is an invented crisis being pushed by extreme anti-choice activists and politicians. It does not exist in real, actual medical practice.

What does happen is akin to neonatal hospice. When an adult has a terminal illness and all heroic efforts will still lead to the same outcome—but with incredible pain and suffering in the process—we can understand that the most humane course of treatment may be comfort care. The same can be true for infants in certain incredibly sad situations.

In these situations, parents are given no good choices. These parents had named their babies, had showers for them, planned their nurseries. All they’d wanted was to have a healthy baby—a chance that was taken from them with a horrible diagnosis. Many times, this horrible diagnosis comes during their 20-week ultrasound, when all they had hoped for that day were some pictures to frame and put on their desks. When something comes back as concerning in an ultrasound, doctors order a higher-level scan and additional tests that can take weeks to confirm. It then takes parents time to make a horrible, heart-rending, petrifying decision: continue a pregnancy to term and deliver a baby who will die in their arms, or terminate the pregnancy early and spare everyone additional pain.

Many times, though, the diagnosis comes abruptly, and parents have no time to respond. In cases where otherwise healthy infants are born early as a result of trauma or premature labor, most parents request that all heroic measures be taken. To do so, providers follow the Neonatal Resuscitation Provider guidelines, which are evidence-based practice protocols set forth by the American Academy of Pediatrics. These guidelines prescribe, in great detail, all heroic measures that need to be taken—including chest compressions, intubation, medication, and line placement. This is routinely done for infants born at 23 weeks or weighing at least 500 grams. Advancements in neonatology have enabled providers to save what we call “micro preemies,” but their hospital course is extremely unstable. There are times when parents of these tiny babies are given a horrible prognosis for their very much loved and wanted child, and they make the gut-wrenching decision to withdraw life support to spare their baby any more pain and suffering, and enjoy their last moments together in peace.

In either case, abortion in later pregnancy and palliative care for newborns are simply two outcomes of the same severe fetal diagnosis. In both cases, parents are doing what they believe is best for the child, and for their own physical and mental health. Equating either decision with an “execution” is disgusting.

There are no case studies of healthy, uncomplicated pregnancies being carried to term, to then have an elective abortion in the delivery room. If, as Trump implied, parents did “execute” a baby after it was born at full term, cared for, and swaddled, that would be infanticide, and it is already illegal. The bizarre fantasy Trump and others are pushing—that there is some kind of epidemic, or legislative support of, legalized infanticide of healthy, full-term newborns—is a lie.

So why are they pushing it? Anti-choice activists are co-opting opposition to laws banning termination of pregnancy later in gestation to push their extreme agenda.

They are posing dishonest questions—about the moral obligations to resuscitate infants who “survive abortions”—as traps to those who don’t have the clinical knowledge to answer with authority about the falsehood of such a premise. Then they use the response as proof of some kind of evil motives in those who want to keep those decisions in the hands of parents. It is part of a deliberate strategy to use these emotionally charged scenarios as an excuse to advance a legislative agenda that will eventually lead to outlawing all terminations of pregnancy, for any reason. Parents going through these horrific scenarios are being used as pawns in this sick political game. They deserve nothing but our love and compassion; accusing them of being unfeeling monsters is inexcusable.

So many of us are parents. We know what kind of factors go into deciding what’s best for our families. We shouldn’t allow ourselves to believe the worst of our fellow parents, our doctors, or our hospitals. Other parents are not waiting until their due date to choose an abortion; nor are they conspiring with their doctors on whether to commit infanticide. As a medical professional, I can’t stress enough that these are not legitimate, systemic practices taking place, despite claims to the contrary.