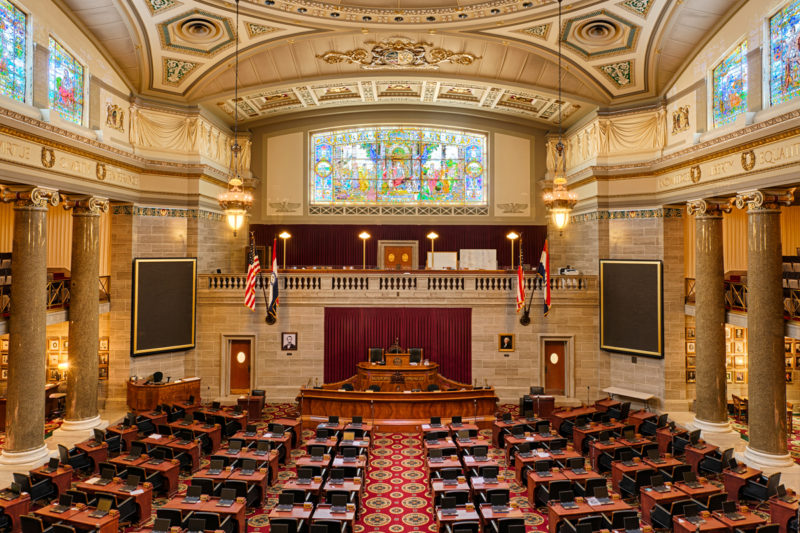 Two bills introduced in the Missouri legislature, SB 259 and HB 573, both contain “reforms” that if passed will undermine these protections and harm sexual assault survivors. Nagel Photography / Shutterstock

Missouri has become one of the first states to attempt to gut Obama-era Title IX protections.

In 2011, the Obama administration implemented a standard for judging sexual misconduct cases that would improve the chances of survivors obtaining justice.

Two bills introduced in the Missouri legislature, SB 259 and HB 573, both contain “reforms” that would undermine these protections and harm sexual assault survivors.

Notably, those bills directly mirror Department of Education (DOE) Secretary Betsy DeVos’ proposed Title IX reforms. While DeVos’ proposed rules, unveiled last November, are slightly less destructive than the two Missouri bills, there is considerable overlap between them. And the timing of it all cannot be overstated.

“When looking at this we can’t just see the proposed rules but also how the administration came out and attacked Dr. [Christine] Blasey Ford after she spoke out against [then-U.S. Supreme Court nominee Brett] Kavanaugh. How the administration is working to silence survivors that seek amnesty,” said Sage Carson, manager of Advocates for Youth’s Know Your IX, a program that works with survivors and students to bolster their legal rights.

The Trump administration has “created an entire environment where women are disbelieved. When we create a national platform for folks to dismiss women—a community that says that women are liars—I am not surprised that we see states adopting bills that are reflective of this ideology,” Carson said.

The house bill, which reportedly is more likely to pass, would require schools to adopt a “clear and convincing” standard only for sexual harassment complaints but not for other forms of discrimination. “If I punch my roommate in the face, my roommate can prove it at a lower standard that it occurred, but if I was sexually assaulted I would have to prove it at a higher standard,” Carson said.

The house bill would also allow cross-examination of the survivor and witnesses, which Carson said would be hugely detrimental to survivors. “Survivors have stated that it is the most traumatizing portion in going through the investigation,” she said.

Additionally, the bill would allow both survivors and respondents to appeal decisions made by universities, which Missouri House Minority Leader Rep. Crystal Quade (D) said could create a “socio-economic imbalance.”

“One student could have a rich attorney who is well-versed in the issue while the other could be represented by an advocate or their RA or a professor,” Carson said. “That is creating an unfair scenario in that one party has better representation than the other.”

The only respite in the bill is a “rape-shield” protection, which prevents the survivor’s sexual history from being used as evidence in the investigation.

On the other hand, the senate bill is much harsher and would allow respondents to submit irrelevant information like sexual or mental health history in order to further harass survivors. The bill would allow respondents to sue survivors for making a “false statement,” a phrase which has yet to be defined. Carson said that because most cases of sexual misconduct in Missouri schools don’t end in the finding of responsibility, “This means that all of those survivors could be liable for a lawsuit simply for speaking out.”

Both bills would create a new process for sexual misconduct investigations and would require Title IX cases be heard by the state panel of commissioners, a panel that follows courtroom-like procedures. Additionally, both bills would ban anyone from using the word “survivor” or “any other term that presumes guilt” before the investigation has been closed.

What Carson finds most concerning, though, is that the bills “prioritize respondents over survivors, which we see as just another way to stop survivors from reporting.” Carson continued, “We now know that about a third of survivors drop out of school because of sexual violence and the way their schools handled their cases.”

Carson anticipates that reporting would drop off even more steeply if bills like SB 259 and HB 573 pass.

It’s also worth noting that the bills are backed by a new organization called the Missouri Campus Due Process Coalition. It describes its mission as: “Each and every student on Missouri college campuses should feel safe from, both, violent attacks and false accusations.”

As Mother Jones reported, the group is funded by a dark-money nonprofit called Kingdom Principles Inc.

Quade spoke to Rewire.News about the legislation and the dark-money nonprofit bank-rolling it. “The Title IX bill is astonishing not simply because of the content of the bill, but the process we’ve seen around it. I have never seen so much money behind something so quickly, and seemingly out of nowhere,” Quade said.

The Missouri Campus Due Process Coalition, whose Twitter account only appeared in February, tweeted on March 1, “Time after time, innocent lives have been ruined because institutions have rushed to judgment. It’s time to restore due process to college campuses.”

Carson says this argument is just an excuse to further marginalize survivors. “When we see these bills coming forward, they are always painted through the lens of due process,” Carson said. “Yet [the bills] are only about sexual misconduct. They are not about any other type of discrimination or wrongdoing that would occur on campus, which signals to us that this is entirely just about the idea that survivors lie.”

This disregard for the voices of survivors isn’t solely a problem native to Missouri lawmakers. The aforementioned “reforms” from Betsy DeVos, like the Missouri bills, include narrowing the definition of sexual assault, increasing the standard of proof, removing the 60-day timeline for how quickly a school should process a case, and require cross-examination.

But as these bills, and others cropping up across the country that prioritize the rights of the accused over the rights of survivors, move through state legislatures, it’s important to remember that DeVos’ Title IX rule is not finalized. “DeVos’ proposal is still just a proposal,” Carson said. “States should not be moving before the DOE, and courts have the ability to review the over 100,000 comments that have come out against the proposed rule and also for courts to decide whether pieces of the proposed rule are even legal and aligned with the intention of Title IX.”

Quade agrees. “This [Missouri] bill is being moved because of the Trump administration changes that are forthcoming. Our argument to that has been, let’s wait to see what these changes are before we do anything,” Quade said.

Missouri’s Republican lawmakers seem determined to undermine the safety of young women on campus. Quade describes another bill, HB 575, as pertaining to “campus protection officers, which would allow faculty and staff to be approved to campus CCW [carrying a concealed weapon] as protection officers.” The debate this week in the Missouri house spiraled out of control with Republican lawmakers arguing that women having guns on campus would protect them from sexual assault.

“Missouri legislators seem to have completely failed to understand how sexual assault functions at all, and now they are using the experiences of survivors to further their gun-focused agenda,” Carson said.

Quade also expressed her frustration. “There’s little in life more frustrating than being told that women wouldn’t be raped if we carried guns, by the same people who simultaneously want to take away our ability to come forward on campus to hold rapists accountable,” Quade said.

It could be months before the DOE reviews the thousands of comments and officially makes a ruling. Meanwhile, Missouri’s house and senate are expected to vote on their respective bills within the next few weeks.