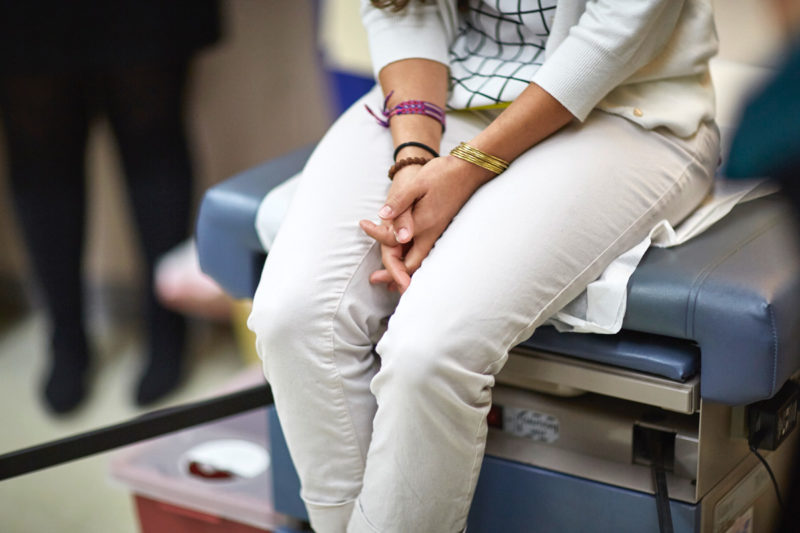 Yeakel determined that Texas had failed to offer any evidence to support its claims that banning D and E abortions promoted its interest in fetal life without unduly burdening a patient’s right to choose. According to Yeakel’s findings, the evidence failed to show that the other methods advanced by the state for terminating an abortion were available and safe. Chrissy Faessen / Flickr

The Fifth Circuit Court of Appeals on Wednesday announced it would not be issuing a decision in a case challenging Texas’ ban on the most common method of later abortion until the U.S. Supreme Court resolves a different case: June Medical Services v. Gee, which involves a Louisiana law requiring doctors who perform abortions to have hospital admitting privileges.

The challengers in Gee are expected to file their cert petition sometime in April, which would give the Roberts Court the opportunity to decide before it recesses for the summer whether to take the case next term. Should the Court do so, arguments would likely occur in the fall, with a decision sometime in 2020.

This means that the Texas ban on dilation and evacuation (D and E) abortions will remain blocked for several months at a minimum. That’s the good news. But the Fifth Circuit’s decision this week in Whole Woman’s Health v. Paxton also indicates that conservative federal appeals court judges aren’t just eager to get the Roberts Court to revisit abortion rights jurisprudence—they intend to force the issue if they can.

In November 2017, a federal district court declared the provision of SB 8 that bans D and E abortions unconstitutional and permanently blocked the measure from taking effect. The decision, authored by Judge Lee Yeakel, was a rock-solid win for abortion rights. Yeakel determined that Texas had failed to offer any evidence to support its claims that banning D and E abortions promoted its interest in fetal life without unduly burdening a patient’s right to choose. According to Yeakel’s findings, the evidence failed to show that the other methods advanced by the state for terminating an abortion were available and safe. Therefore, Yeakel ruled, the D and E ban had the effect of banning most second-trimester abortions and was an undue burden on abortion rights.

Naturally, the state of Texas appealed Yeakel’s decision. During oral arguments in November, it was clear the conservative members of the Fifth Circuit were looking for a way to reverse Yeakel’s decision and allow the D and E ban to take effect. But then came the Roberts Court’s order in Gee in February: a reprimand, of sorts, to the Fifth Circuit for trying to unilaterally overturn a district’s court factual findings in order to allow a patently unconstitutional abortion restriction to take effect. The judges on the Fifth Circuit are conservative and bold, but they are not stupid. They are not going to risk setting themselves up for another opportunity for the Roberts Court to reel them in, just a month later.

At issue in Gee—the case the Fifth Circuit is waiting on the Roberts Court to resolve—is Act 620, a Louisiana law that would require any physician providing abortion services in Louisiana to have admitting privileges at a hospital within 30 miles of the procedure. Act 620 was specifically modeled after one of the provisions in Texas’ HB 2 that was eventually declared unconstitutional in 2016 in Whole Woman’s Health v. Hellerstedt.

A federal district court blocked Act 620 from taking effect following a six-day trial, issuing detailed findings of fact as to the undue burden Act 620 would place on abortion rights. But the Fifth Circuit disagreed and reversed the district court, ruling the law should take effect. My colleague Imani Gandy has this excellent analysis of the Fifth Circuit’s decision in Gee, and I think it’s worth noting a couple points in particular. As Gandy points out, one of the most egregious parts of the decision was that the appellate court effectively substituted its own judgment for that of the lower court:

Appellate courts are required to accept a lower court’s factual findings unless those findings are clearly erroneous. The two-judge majority panel simply declared that the district court had committed “clear error,” even though no reasonable judge could review the district court’s extensive findings of fact and draw that conclusion. “Clear error” is a high bar. It is not mere disagreement or an appellate judge’s personal feeling that the district court should have interpreted the facts differently.

When the Supreme Court decided in February to stay the Fifth Circuit’s decision in Gee, it likely did so not because it disagreed with the court on the merits of its decision, but to send a message. The Fifth Circuit had so wildly and intentionally flouted abortion rights jurisprudence in its application of Whole Woman’s Health to uphold Act 620 that Chief Justice John Roberts joined with his liberal colleagues to temporarily block their ruling. Roberts’ voting record makes it clear he is no fan of abortion rights. So it’s reasonable to interpret his decision as a message to appellate courts like the Fifth Circuit that if anyone is going to be rewriting abortion rights jurisprudence, it will be the conservative justices on the Supreme Court under his guidance.

All this could explain Wednesday’s short order in Whole Woman’s Health v. Paxton delaying any decision in that case pending an outcome at the Supreme Court in Gee. It saves the Fifth Circuit from having to affirm abortion rights, but also allows them to avoid another smackdown from Roberts.

What happens next is up to the Roberts Court and likely the chief justice himself. If advocates don’t file their petition for review by April, the Court’s February stay dissolves and the Fifth Circuit’s decision in Gee is allowed to take effect. Presumably, the Fifth Circuit would rule in short order to allow Texas’ D and E ban to take effect as well.

Should the Roberts Court take Gee, then the outcome of the Whole Woman’s Health v. Paxton remains in limbo until Gee is resolved.

In the meantime, the Roberts Court is also considering whether to take a case out of Alabama challenging that state’s D and E ban, as well as an Indiana petition seeking to enforce fetal remains disposal requirements and a state ban on “sex and disability”-based abortions. Despite the retirement of Justice Anthony Kennedy and the circus surrounding the confirmation of Brett Kavanaugh to replace him, this Supreme Court term has been kind of a sleeper, with few big cases on the docket. I doubt next term will be so quiet.