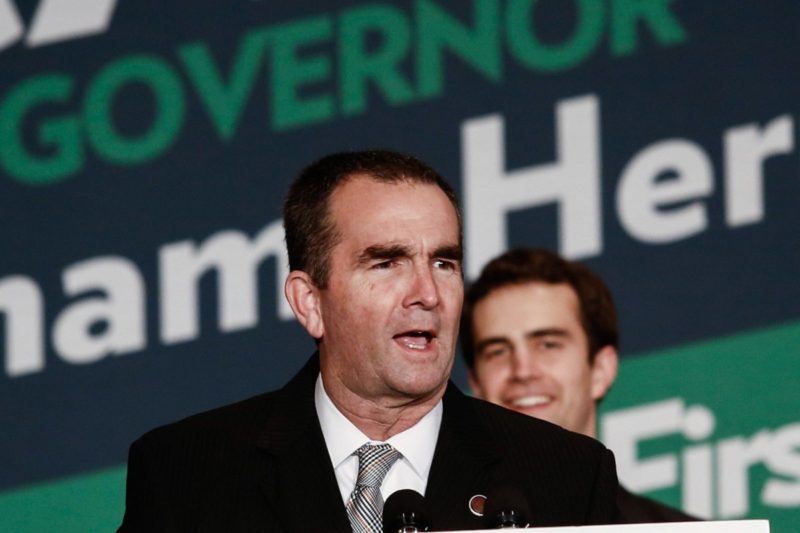 A 1984 photo of two men, one of whom is Virginia Gov. Ralph Northam (D), was published on Friday by a conservative website, showing one in Ku Klux Klan robes and the other in Blackface. The photo was one of several Northam himself chose for his medical school yearbook page.

The photo alone is reason enough for Northam to resign. Additional details revealed tonight, however, suggest there may be more to come. A CBS report revealed a page from another yearbook, this one from Northam’s time at the Virginia Military Institute listed “Coonman,” a racial slur, as one of his nicknames.

In a statement Friday evening, Northam apologized for the photo, saying in part:

I am deeply sorry for the decision I made to appear as I did in this photo and for the hurt that decision caused then and now. This behavior is not in keeping with who I am today and the values I have fought for throughout my career in the military, in medicine, and in public service. But I want to be clear, I understand how this decision shakes Virginians’ faith in that commitment.

I recognize that it will take time and serious effort to heal the damage this conduct has caused. I am ready to do that important work. The first step is to offer my sincerest apology and to state my absolute commitment to living up to the expectations Virginians set for me when they elected me to be their Governor.

This is not enough.

Racism is baked into our culture, our social interactions, our economic system. Racism was the driving force of Donald Trump’s birther campaign and of Trump’s subsequent presidential campaign. Racism is the undercurrent of virtually all right-wing politics, and is systemic in the GOP.

Racism is everywhere in this country and its effects are obvious. We are reminded of our racist past and present if only by virtue of the fact that so many objected in the past two years to the removal of public displays of Confederate statues, and that in Northam’s own state, Heather Heyer was killed and others injured during a violent rally led by white supremacists.

Racism is why the Trump administration is dehumanizing and attacking immigrants and caging families at the border; it is why Black women have higher rates of maternal mortality, Black babies have higher rates of infant mortality, and Black families have far less capital than whites. Racism is why the Trump administration is arbitrarily banning Muslims, why those fighting for Palestinian rights are being attacked by elected officials, and why the administration is ending the protected status for tens of thousands of people who fled disaster. Racism is why the administration attacks immigrants any chance it gets and why the white GOP establishment is aghast at the fact that Roger Stone, who was potentially involved in treasonous activity to influence the 2016 election, was arrested in a manner used every day in communities of color for transgressions as small as suspected use of marijuana.

Democrats are by no means innocent of racism, whether overt or subliminal. But both the Democratic Party and the progressive movement have long pushed to be better, to change, to see, admit, own, and address the racism within and all around us. At a time when white nationalist movements are on the rise and becoming increasingly visible and openly violent, there is no room for excusing racist behavior.

On the first day of #BlackHistoryMonth, Northam should accept responsibility & resign paving the way for Lt. Gov Justin Fairfax to become the second African American governor in Virginia’s history. That is the type of restorative justice that our nation cries out for at this time https://t.co/twRh9hANeZ

If Ralph Northam is in fact “ready to do important work,” he should start that work by resigning.