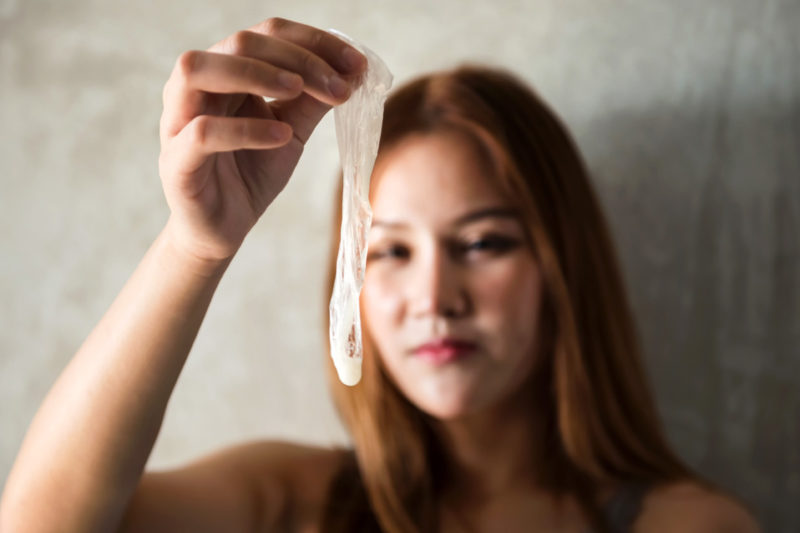 We can’t figure out whether people are squeamish about cleaning up after sex or thinking they're hurting the environment by discarding condoms. Either way, get over it. Shutterstock

Although lots of new contraceptives are on the market or headed to the market, condoms remain the only method that prevent both pregnancy and sexually transmitted infections (STIs).

But while most of us have used one at some point in our sexual lives, few people seem to use them every time they have sex. Cosmopolitan magazine recently teamed up with Power to Decide, a national campaign dedicated to preventing unplanned pregnancy, to determine why, in this age of skyrocketing STIs, we’re still so willing (or eager) to make love without latex.

The survey of 2,000 people between the ages of 18 and 34 confirmed that few young adults (22 percent) use condoms every time they have sex. In fact, half said they never do and 65 percent said they didn’t use one the last time they had sex. The top three reasons for not using condoms (among those who were having sex but didn’t use one every time): “I’m not worried about STIs,” “My partner didn’t insist,” and “I hate throwing them away.”

These sound more like excuses than valid reasons for taking a risk to us. The truth is that all sexually active people should be a little worried about STIs. These infections are widespread and can lead to long-term health problems like infertility. Unless you are in a mutually monogamous relationship where everyone has been tested (and treated if necessary), it’s important to be vigilant about STIs. Other forms of birth control—like the pill, implant, or IUD—are great for those who need to prevent pregnancy as well, but only condoms protect against STIs.

Using condoms should be a joint decision, but it sounds like a lot of people are passing the buck to their partner; 33 percent of participants said they only use a condom when their partner insists, but 72 percent say they respect a partner who asks to use one. Instead of looking to your partner to make the decision and let you off the hook, talk about it ahead of time and agree to both insist on condom use.

As for the garbage excuse, we can’t figure out whether people are squeamish about cleaning up after the act or feeling bad about the environment. Either way, get over it. This is not the time to reuse, reduce, or recycle. It’s the time to take it off carefully (use a tissue if it helps) and toss it in the trash.

More results from this survey are in the February print issue of Cosmopolitan magazine, which is on newsstands now.

For the Future: A New Contraceptive Patch With Needles

Users would put on a patch the size of a small bandage, and the microscopic needles on the underside would push into the skin and gradually deliver a month’s worth of levonorgestrel, a hormone used in many birth control pills. The microneedles—which are built on technology developed to deliver vaccines without shots—dissolve inside the body.

Unlike existing contraceptive patches that have to be worn for most of the month, this can be removed and thrown away after just 5 seconds of wearing. More impressive, the patches could cost one dollar to produce.

The developers believe that this technology could make birth control more accessible. Mark Prausnitz, a Georgia Tech engineering professor and one of the researchers on this project, told USA Today:  “If you could have this combination of a long-acting [contraceptive] plus something that can be self-administered, that should be really attractive in many cases.”

The patch was recently tested in rats and successfully delivered sufficient hormones for a month. The researchers hope to eventually develop versions that could last for as long as six months or as little as one week. Any version, however, is still at least five years away from being available for humans.

We Have All the Tools We Need to Prevent Cervical Cancer

January is Cervical Health Awareness Month and we here at This Week in Sex want to take a moment to remind our readers that we have all of the tools we need to prevent this disease, which still kills about 4,000 women every year.

We have a vaccine. Almost all cervical cancer (90 percent) is caused by certain types of the Human Papilloma Virus (HPV), a widespread sexually transmitted infection that can also cause genital warts and cancers of the penis, vulva, vagina, anus, mouth, and throat. Gardasil-9, the latest HPV vaccine, now protects against 9 types of the virus—two that are known to cause genital warts and seven cancer-causing types. Public health experts believe that with widespread use, the vaccine has the potential to prevent almost all cases of cervical cancer.

The Centers for Disease Control and Prevention (CDC) recommends that all young people get this vaccine around age 11, and the FDA recently approved Gardasil-9 for use in men and women up to age 45. Check with your health-care provider to see if you should get this vaccine, make sure to vaccinate your children when it’s time, and tell all your friends about it so they can get the vaccine for themselves or their children.

We have multiple screening tests. When caught and treated early, cervical cancer is highly curable. The Pap smear test can detect cancer in its earliest stages and even precancerous changes to cells on the cervix that can be treated before they become cancerous. There is also a test that can check for the types of HPV that are most likely to cause cervical cancer. The CDC recommends that all women get a Pap smear before age 21 and that women over 30 get screened regularly (at three or five-year intervals) with the Pap test or the HPV test or both. If you have a cervix, talk to your health-care provider about when you next need to get screened and talk to your friends, families, and co-workers to make sure they’re getting needed screenings too.

Condoms can help. HPV is transmitted through skin-to-skin contact, so condoms can only protect against transmission if the infected skin is within the area it covers. That said, research has shown that using condoms significantly reduces the risk of transmission and can help prevent the health issues caused by HPV, included genital warts and cervical cancer. Talk to your partner and friends about the importance of using condoms.

Cervical cancer is now one of these easiest cancers to detect and prevent, and we can all do our part.