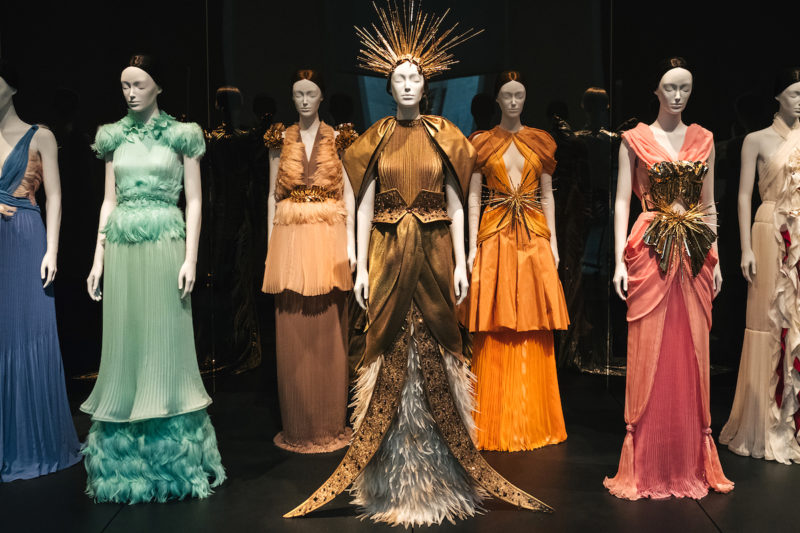 This year more than 1.6 million people visited The Metropolitan of Art’s exhibit, “Heavenly Bodies: Fashion and Catholic Imagination,” making it the most popular exhibit in the Met’s history. You would think that as a scholar of religious clothing I would be thrilled at this box-office success. Instead I’m concerned that it signals that religious clothing has become just another thing we feel entitled to package and consume for our own profit and entertainment.

At first no one was more excited than I when the Met announced this theme. Forty-two liturgical items on loan from the Vatican? Unprecedented. Couture gowns inspired by Catholic aesthetics from major design houses like Dolce & Gabbana, Valentino, and Dior? Yes please. I was excited to learn what sorts of inspiration designers found in the Catholic faith. Were they drawing on Catholic art? Rituals? Their own experiences at mass? Would there be political statements? Subversive critiques of Catholic ethics? I assumed the point of having the glittering items on display amongst the Met’s permanent collections was to teach us how to “read” them better. I thought I’d emerge from the exhibit with expertise akin to that of Amanda Priestly in The Devil Wears Prada, who knows the real story behind a cerulean blue sweater.

Things started to go awry as soon as I arrived at the Met. I had pre-purchased my entrance ticket and the audio tour, only to find out that there was no audio tour.

Things did not improve. I started in the Byzantine galley where five gold and silver metal mesh Versace dresses were on display, only they were placed above eye level, making it feel like I was peeking up the mannequins’ skirts. I see London, I see France, I see Versace’s underpants. The crush of people prevented me from locating the actual processional cross that inspired Versace’s minis slinky collection in the first place. But no one seemed to care.

Nathan Lane told Jimmy Fallon on the tonight show that Heavenly Bodies was like “touring the Vatican on mushrooms.” By the time I reached the medieval sculpture hall, I agreed. I was disoriented by the low lighting while the Michael Nyman soundtrack made it feel like I was strolling around an ordination scene from Game of Thrones. I was left to figure out for myself how the garments related to the Met’s permanent collections. And I didn’t have a clue.

This is especially true of the Vatican pieces on display in the Anna Wintour Center in the basement of the Met’s 5th avenue location. These items are impressive, and obvious displays of church power and wealth. But by displaying them without commentary, the viewer misses that they’re also about ambition and corruption. The Piux IX cape was the largest and most elaborate piece on display, and quite impressive with its detailed embroidery. But there’s no indication that it was commissioned by Maria Anna Carolina of Austria to bribe the pope for political favor; nor that Piux IX was one of the most authoritarian leaders in church history. Religious clothing matters when we understand it in a particular context. Otherwise, we miss the point.

Another subject the exhibit was strangely silent about was the Church’s sex abuse scandal. Rick Owens’s provocative monastic robe with a hole cut out at the genital area was tucked away at the Met’s Cloisters location, where less than 14% of the 1.6 million visitors went. I agree with Catholic Studies scholar Robert Orsi, who argued that this garment “ought to have been the centerpiece (the centerfold?) of the exhibition.” But rather than give us an exhibit about religious fashion that’s challenging or uncomfortable, the Met delivered glamor and drama, and made sure the gift shop was stocked with nice tote bags so we can prove to all our friends how cultured we are.

In the documentary The First Monday in May, former head curator of the Costume Institute Harold Koda insists that fashion, like fine art, “is laden with concepts, aesthetic principles, and the most refined techniques.” But we didn’t learn much about these topics from the Heavenly Bodies installation. To be sure, it’s not the Met’s Costume Institute’s job to provide a primer on the Catholic faith. But a museum’s charge is to educate, and I’m left wondering whether the curators were afraid of offending their Vatican partners or simply not willing to take the religious content of the garments seriously?

They may have created the most popular exhibit in the Met’s history, but to do so they hijacked Catholic aesthetics reducing its theology, rituals, and vestments to eye candy. The result? No one emerged from the exhibit any wiser, but the Met is quite a bit richer.