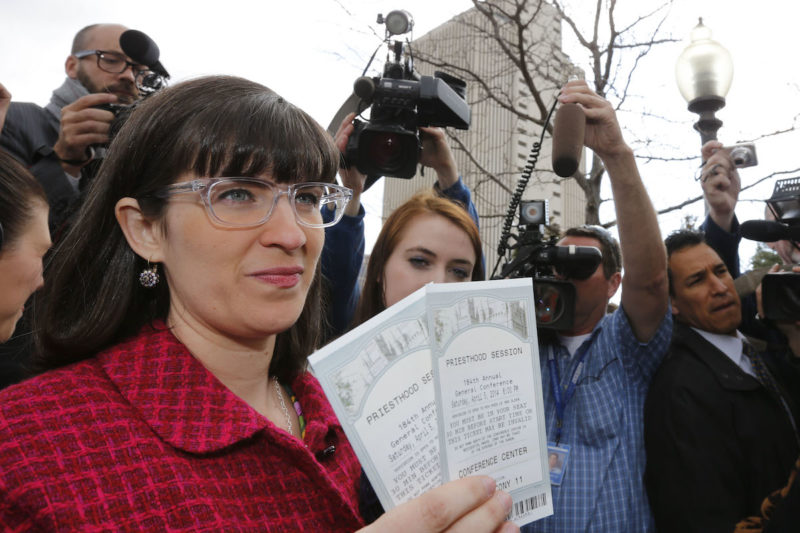 Wednesday morning, Mormon forums—er, make that, forums in which members of The Church of Jesus Christ of Latter-day Saints participate—began buzzing with rumors of changes to the temple ceremony. Eventually the rumors were confirmed by an announcement from the First Presidency, stating in part:

Over these many centuries, details associated with temple work have been adjusted periodically, including language, methods of construction, communication, and record-keeping. Prophets have taught that there will be no end to such adjustments as directed by the Lord to His servants.

A dedicated temple is the most holy of any place of worship on the earth. Its ordinances are sacred and are not discussed outside a holy temple.

Because the church will make no official statement on the changes, it fell to members to catalogue them (even though it meant defying the command not to discuss the temple outside of the temple). Several involve gender and address previous imbalances and inequalities. In the sealing ceremony, which is often referred to as a “temple marriage,” a wife no longer gives herself to her husband; instead, spouses reciprocally give themselves to one other. In the endowment ceremony:

In many ways, these are important, meaningful changes. They reduce the subordination of women in the church, and they also make the church’s doctrines less incoherent. As articulated in the 1995 Proclamation on the Family, the church has tried to insist that spouses are “equal partners” in an entity over which men preside:

By divine design, fathers are to preside over their families in love and righteousness and are responsible to provide the necessities of life and protection for their families. Mothers are primarily responsible for the nurture of their children. In these sacred responsibilities, fathers and mothers are obligated to help one another as equal partners.

But if men preside over their wives and children by divine design, an equal partnership is, by definition, impossible.

There will be little clarity on this topic for the foreseeable future; the fact that discussion of this matter is officially verboten means there can be no official clarification, and even external corroboration of facts may be slow. For instance, though unofficial documentation exists of a survey about perceptions of temple in the 1980s (I love the question about whether people fell asleep during the endowment ceremony), I couldn’t find verification of reports of a recent survey of otherwise faithful Latter-day Saint women “who no longer [attend] the temple because of issues with the ceremony.” I have, however, heard firsthand reports from people in a position to know that young women are often horrified and revolted by the misogyny of the temple ceremony, to the point where it has become a problem for both temple attendance and church activity. (It was certainly a problem for me.)

Awareness of that might be behind President Russell M. Nelson’s Sunday afternoon talk from the October 2018 General Conference, in which he invites members “to worship in the temple and pray to feel deeply the Savior’s infinite love for you, that each of you may gain your own testimony that He directs this sacred and ageless work.” But it’s a bit weird to call the work “ageless” when significant changes to its outdated elements had to have been already in the pipelines.

Responses to the changes have varied widely. A headline at the Salt Lake Tribune proclaimed that “faithful feminists will see revisions and additions as a ‘leap forward,’” though plenty of “faithful feminists” expressed anger and pain. Women have repeatedly objected to misogyny in temple ordinances, in doctrine, in practice—and the response has usually been some sort of censure: pray more and criticize less, seek true understanding, quit being so prideful, quit being so angry, quit trying to dilute the word and will of God with the philosophies of men—or, even worse, the philosophies of other prideful, angry women. Plus, you’re not even supposed to talk about this in the first place, so you’re being sinful and disobedient merely by raising the question.

If you haven’t lived it, it’s hard to understand just how jarring and distressing it is to finally experience something you’ve been told your whole life is the absolute pinnacle of spirituality—only to realize that it devalues and denigrates you. It’s a core betrayal, compounded when you’re told you’re not allowed to ask questions about it. The promise in Moroni 10:5 is that “by the power of the Holy Ghost ye may know the truth of all things.” For a lot of women, that has included a visceral understanding that the endowment ceremony harmed their spiritual development, especially since the temple is supposed to be one of the places where it’s easiest to hear the Holy Ghost.

It’s gaslighting, moral cowardice, and yet another betrayal to deny women’s anger and pain, to tell them they have no right to ask the church to be less misogynist because the church can’t possibly be misogynist—only to go and make some of the changes women have sought while still explicitly denying that women ever had any sort of legitimate complaint.