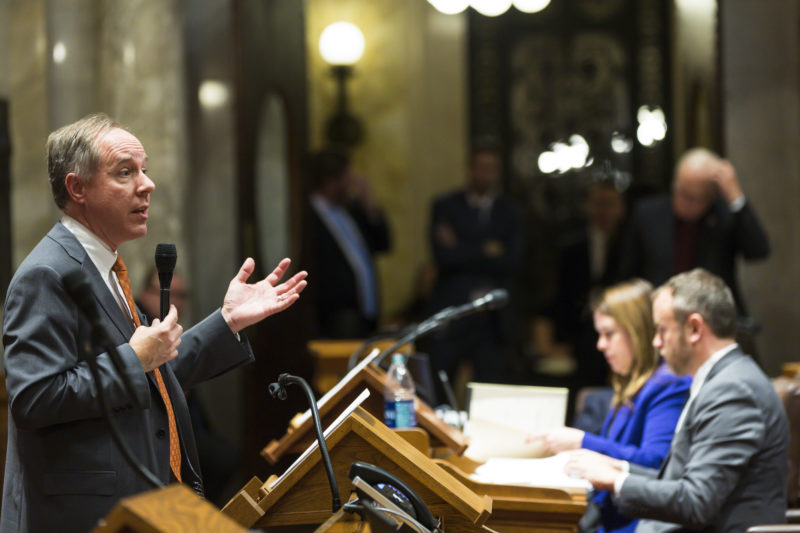 The bills are on the governor’s desk, but Gov. Scott Walker (R) has not yet said whether he will sign them. Meanwhile, Democrats say they are considering legal action.

Public reaction to the bills has been negative. Lawmakers listened to hours of testimony Monday night, virtually all of it against the bills. Protesters filled the capitol building Tuesday, bearing signs, chanting, and interrupting Walker’s remarks during the lighting of the capitol’s Christmas tree.

One protestor, Jill Ferguson, said the Republican proposals were out of step with Wisconsin’s history.

“This is of pivotal importance for Wisconsin,” she said. “This is where the progressive party was born and look where we’ve come.”

Ferguson came with 11 others from the Milwaukee area. The group was organized by Fight for $15 Wisconsin, which advocates for a $15 minimum wage and unionized workplaces.

Along with a litany of changes that affect taxes, Medicaid, committee appointments, and legal challenges to state law, the GOP bills take aim at voting. Governor-elect Tony Evers, a Democrat who defeated Walker in November, has proposed reforms that would increase voter access. Early voting is widely seen as part of the reason for Democrats’ success in November.

Early voting is targeted by Assembly Bill 1071, equivalent to Senate Bill 885. The legislation would limit early voting to a two-week period. While early voting varies by county, voters in the heavily Democratic counties of Dane and Milwaukee could vote early for more than a month before the 2016 presidential and 2018 midterm elections.

Early voting was heavily used by Wisconsin voters during the 2018 midterms. Before election day, the New York Times reported that over 565,000 votes were cast early, 23 percent more than in 2014.

Curtailing early voting could have a drastic effect on elections in a state where control of the governor’s mansion came down to 30,849 votes last month. The ACLU and other groups have criticized efforts to scale back early voting because the method is disproportionately used by Black voters.

Besides suppressing already-disenfranchised voters, these changes seem to fly in the face of a 2016 federal court ruling that a similar requirement was discriminatory.

In addition to the controversial legislation, GOP state senators approved more than 80 of Walker’s appointees, many of them without a public hearing or statement of economic interest.

A bill to move the 2020 Wisconsin Supreme Court race to a different date—a move widely opposed by both Republican and Democratic county clerks for its impracticality—did not make it out of committee. Senators voted down an assembly bill that would have prevented insurers from rejecting people with pre-existing conditions, which was passed during the normal session. It was criticized by Democrats for not going far enough and by a handful of Republicans for going too far. Speaker Robin Vos (R-Rochester) told reporters he hoped the measure would be taken up early next session.

Also on Tuesday, Michigan Republicans passed less-sweeping bills in a lame-duck session. The bills dilute laws raising the minimum wage and requiring paid sick leave, which Republicans adopted before the election to avoid voters approving ballot measures they could not amend.

Dee Hall, managing editor at the Wisconsin Center for Investigative Journalism, said these Wisconsin bills were moving faster than past controversial fast-tracked bills, including 2011 Act 10, which ended collective bargaining for state workers and was enacted after 24 days.

“This is another example of fast-tracking in which the public is left out,” Hall said in an interview.

Fast-tracking bills is nothing new in the Wisconsin legislature. A recent Wisconsin Center for Investigative Journalism investigation found that legislators fast-tracked 11.2 percent of bills since 1997. Fast-tracking surged during the first year of Walker’s first term, when one quarter of all legislation was fast-tracked. The investigation defined a fast-tracked bill as one that was introduced, deliberated, voted on, and signed within 48 days.

Getting bills through the legislature in three days, as Republican senators did this week, is rare. Based on data published by the center, a bill that passed both houses in that time would be faster than 97 percent of bills enacted since 1997.

Lame duck sessions, while not unprecedented, are also rare in Wisconsin. The last lame duck session occurred in 2010, when Democratic legislators sought to approve union contracts after Walker won the open governor’s seat.

Both were lame-duck sessions, but the similarities end there. Democrats in 2010 did not attempt to limit Walker’s or the attorney general’s powers—a point the nonpartisan Legislative Reference Bureau confirmed in response to questions from Democratic legislators. All but one of the the union contracts, had they been approved, would have extended only one year into Walker’s term. And Democrats didn’t schedule a floor vote the day after the hearing.

Both incumbent Democratic lawmakers and Democrats coming into statewide office criticized the legislation.

“The legislation before you today and the spirit of this extraordinary session are unfettered attempts to override and ignore what the people of Wisconsin asked for this November,” Evers wrote in written testimony submitted to the Joint Committee on Finance.

“It’s a very sad day when we’re having the Wisconsin election bureau certify the results on the same day there’s an extraordinary session to remove powers from the Governor elect,” she said.