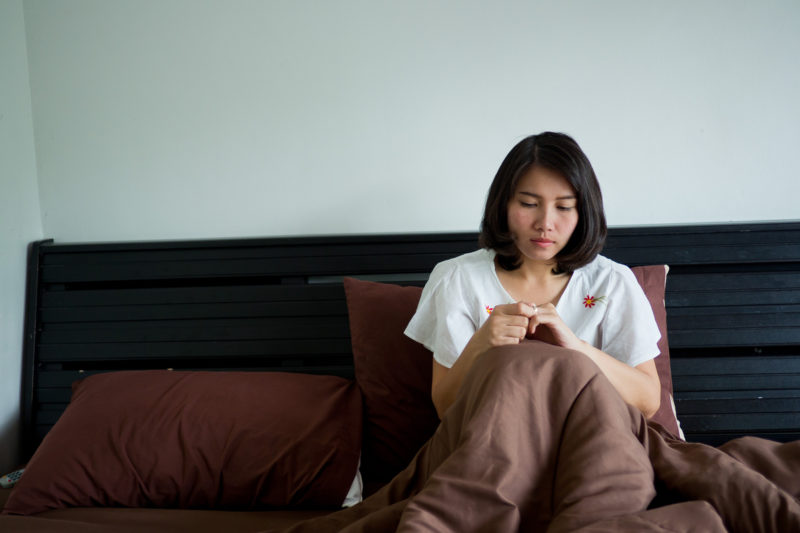 In many cases, people are already afraid to report their abuser. Shutterstock

When Mayela Sanchez Miles finally fled her abusive marriage toward the end of 2016, she pinned all her hopes on filing for a green card through the Violence Against Women Act. But she had to wait over 16 months for her paperwork to process. Unable to work legally, she was trapped in a sort of immigration limbo dependent on friends and her local Houston church.

“It was so hard,” said Miles, swallowing tears. “Breaking from him, standing alone with my pain, my trauma, my four children, not able to work. I thought we would be on the street.”

Form I-360 is a green card petition that immigrants who are on a path to receiving an Immediate Relative Immigrant Visa can use under the Violence Against Women Act (VAWA). If they begin experiencing intimate partner violence, VAWA allows them to continue on that path without being forced to stay with the abuser.

According to U.S. Citizenship and Immigration Services (USCIS), the processing time for this petition is 16 to 20.5 months, up from an average of 4.8 months two years ago.

People are waiting over three times as long as they were in 2016. This means victims of domestic violence can be left dependent on their abusers or utterly alone for almost two years.

Compounding the issue is the fact that starting today USCIS can begin deportation proceedings on victims of trafficking, crime, and domestic violence if their visa petitions have been denied. This is a continuation of a policy outlined in a June memo, stating that certain people who were denied visas, petitions, or other immigration benefits could be placed in removal proceedings.

Previously U.S. Citizen and Immigration Services adjudicated cases and petitions, but as Rewire.News‘ Tina Vasquez has reported, did not focus on immigration enforcement like this.

“The change in policy will create a chilling effect for our clients,” said Tomatore. “We want to encourage all survivors of domestic violence, trafficking and other crimes to go to law enforcement for assistance and to report their abusers.” But, she explained, “if USCIS will be referring those individuals to immigration for removal if their cases are incomplete or rejected, sometimes for administrative errors, it will make people afraid to seek help.”

In many cases, people are already afraid to report their abuser.

Mayela Sanchez Miles said waiting for her I-360 petition to be approved was excruciating. It had taken years for her to gather the courage to collect her children and leave her husband’s outbursts. Originally from Honduras and without a green card or work permit, she was still dependent on the man who would throw tables at her and threaten to have her deported or killed.

Miles’ church gave her some food for the kids and helped her with rent. But soon her electricity and water were cut off because all the utilities were listed in her husband’s name.

“I had no Social Security number and no Texas license,” she said. “He said he would take the car that was registered in his name. He told me, ‘You know what they do to illegals.’”

Miles finally received her petition approval this August, 17 months from when she filed.

Naomi (a pseudonym) is on her second application. She waited for almost two years for her first filing, and received a rejection.

Naomi came to the United States from South Africa in 2014. She was married a year later, but said the relationship that had once made her feel like a lovestruck teenager soon turned. Her husband pressured her to work untenable hours to pay for new and surprising amounts of debt. He isolated her, hurled constant insults at her, and one night he locked her outside in the cold of winter. She fled and was dependent on shelters and friends as she waited 21 months for her paperwork to process.

Now she is just trying to move forward.

“Imagine what I could have done in the past three years,” said Naomi. She tries not to think about the time lost.

Under the new USCIS deportation proceedings policy, Naomi could have been placed in removal proceedings, unable to apply again. People are afraid.

“I feel scared,” said Josue. “They are just not giving anyone that gets denied the opportunity to appeal.”

Josue lives in Florida and applied for a green card petition under VAWA. (The protections are available to men as well as women.) He prefers to use a pseudonym for safety reasons.

Josue’s ex-husband was possessive and prone to fits, one time throwing him to the floor and hurling a computer at his head. He fled, and is now waiting approval for a green card petition from USCIS. Under the new policy he can immediately be placed in deportation proceedings if he is rejected.

“They are forgetting the human part,” said Josue. “Before you could appeal, now they just throw you into an airplane and say ‘We don’t want you.’”

VAWA petitions are different from U visas in that they are available only to the abused spouse, child, or parent of a U.S. citizen or permanent resident, and they do not require law enforcement’s participation. But soon these immigration provisions may expire along with the rest of VAWA. The bill was up for reauthorization in September of this year, and was temporarily passed along with other measures in a short-term spending bill designed to keep the government from shutdown. VAWA must be re-authorized by December 7 in order not to lapse.

In total, 11,326 VAWA I-360 petitions were received in the 2017 fiscal year. About a third of that number were approved. Slightly fewer, about 18 percent, were denied.

A whopping 13,195 petitions, or about 116 percent of those received in the entire year, were pending.

Every one of these forms, for petitioners all over the country, go through the U.S. Citizenship and Immigration Services Vermont Service Center. It appears there is a backlog.

The government statistics note: “Some petitions approved or denied may have been received in previous reporting periods.”

Some petitioners reported that in the past few months processing times have been faster. Lawyers speculate that the Vermont center is processing the newer cases first to reduce the backlog, a method they have seen used before.

U.S. Citizenship and Immigration Services did not provide a comment on processing times or the backlog after repeated requests. Regarding the new policy, a USCIS spokesperson stated that this policy is about adhering to the U.S. legal system, and that immigration benefits are available to those who follow the law.

“For too long, USCIS officers uncovering instances of fraudulent or criminal activity have been limited in their ability to help ensure U.S. immigration laws are faithfully executed,” stated USCIS Director L. Francis Cissna. “This updated policy equips USCIS officers with clear guidance they need and deserve to support the enforcement priorities established by the president, keep our communities safe, and protect the integrity of our immigration system from those seeking to exploit it.”

Some VAWA applicants are able to get employment authorization while they wait for their green card petition to be approved. The processing time for this is only 3-5 months. This authorization provides people with some respite from the fear of deportation, but it’s not the permanent solution they need.

Naomi was able to get a work permit with her second application and is now applying for jobs.

But she said “the stress never ends.”

“It was so stressful just to get to the basics. I never thought I was gonna get out of it.”

Sofia L, originally born in Costa Rica, said that the employment authorization sometimes isn’t enough to find work. She asked to keep her last name private for this reason.

“I’ve been rejected from a lot of jobs because I don’t have a green card,” she said.

She has been waiting for her VAWA petition to be approved for 16 months.

“I think about it all the time. I check the website all the time,” she said as her children chattered behind her, “I call all the time. I send letters.” If the decision is a rejection, USCIS may now directly begin her deportation proceedings.

Yanet Candelario Salazar, who lives in New York, counts herself lucky that she was able to get employment authorization. But she worries every day that Immigration and Customs Enforcement will come and deport her away from her son before USCIS decides on her green card petition.

Originally from Cuba, she has been waiting for her VAWA petition to be approved for over 12 months.

Mayela Sanchez Miles also counts herself lucky. She says the fact that she understands English gives her an edge. Every day she speaks to women through a Facebook group who have applied for a green card through the Violence Against Women Act who don’t speak English, or can’t take their children away from the abuse.

“I really think the VAWA app should have priority because women’s lives are in danger,” she said.

“Why do we have to wait over two years to have some kind of relief? People’s lives depend on it.”

CORRECTION: This piece has been updated to correct the spelling of Mayela Sanchez Miles’ name.