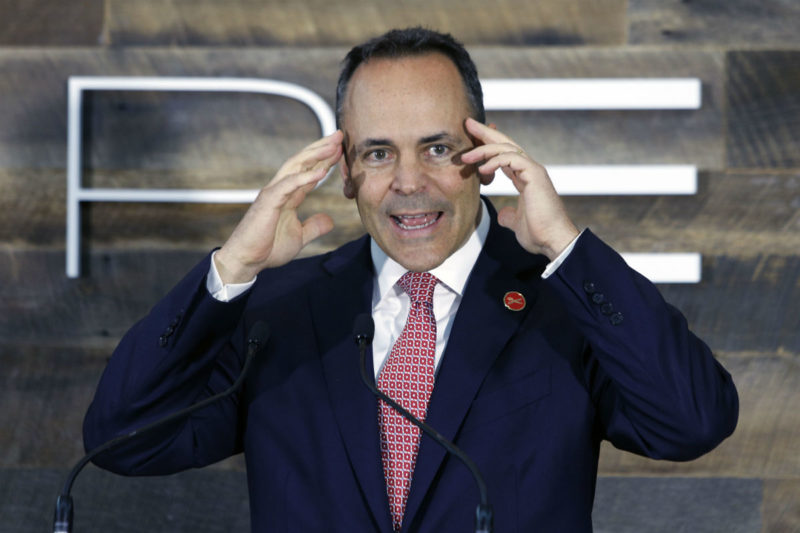 The Bevin administration is defending the measure to ban dilation and evacuation abortions in two ways. Bill Pugliano / Getty

Attorneys from the state of Kentucky are in federal court this week arguing for a law that makes it a felony for doctors to perform the most common form of second-trimester abortion.

Lawyers on behalf of the state’s only abortion clinic sued almost immediately to block the law after it became law in April. Kentucky is one of nine states that has in some form tried to ban the dilation and evacuation (D and E) procedure. So far, every court to have considered these bans has found them unconstitutional—including a federal court that in April blocked the Kentucky law from taking effect while it made its way through the courts.

That hasn’t deterred anti-choice advocates, however, who insist they will take their fight over these pre-viability abortion bans all the way to the U.S. Supreme Court, where they believe a freshly anointed Justice Brett Kavanaugh will provide the fifth vote in their favor. All they need is one federal court to give them an opening. And with the U.S. Court of Appeals for the Fifth Circuit currently considering a similar ban in Texas, the Eighth Circuit considering a similar law out of Arkansas, and an appeal all but inevitable at the end of this week’s trial in the western district of Kentucky, the fight over D and E bans is shaping up to be the next big abortion rights test before the Roberts Court.

The fight over banning the procedure is nearly two decades in the making. In 2000, the Supreme Court in Stenberg v. Carhart struck as unconstitutional a Nebraska law that banned another form of second-trimester abortion clinically known as “intact D and E” or “D and X,” which anti-choice activists had dubbed “partial-birth abortions.” The abortion rights victory was short-lived. Following the election of President George W. Bush in 2000, a conservative Congress passed in 2003 a copycat federal law known as the Partial-Birth Abortion Ban Act. The legislation should have been constitutionally dead on arrival: Like the Nebraska law, it was a pre-viability abortion ban in violation of Roe v. Wade. It also contained no exceptions for the health of the pregnant person,

Thanks to the retirement of Justice Sandra Day O’Connor and the confirmation of Justice Samuel Alito to replace her, the Court in 2007 upheld the federal pre-viability ban in Gonzales v. Carhart.

Writing for the conservative majority in Gonzales, “moderate” Justice Anthony Kennedy said that the federal ban did not unduly burden a patient’s right to an abortion because those who needed an abortion later in their pregnancy would have other options, such as the D and Es. That presumption—that standard D and Es would be available post-Gonzales—was, to be generous to Justice Kennedy, a naive presumption at best. At worst, it was a guidepost anti-choice activists could use to aim future attacks on pre-viability abortions. And, in fact, those procedures are now the ones being targeted in turn by conservative lawmakers in Kentucky, Texas, Alabama, Mississippi, Oklahoma, Kansas, West Virginia, Missouri, and Louisiana.

The law at issue in Kentucky bans the D and E procedure at 11 weeks post-fertilization, or around 15 weeks after a person’s last menstrual period. The law picks up the inflammatory language of the “partial-birth abortion” debate and criminalizes any “procedure in which a person, with the purpose of causing the death of an unborn child, dismembers the living unborn child.” It allows for an exception in cases of “medical emergency,” defined as a condition that “so complicates the medical condition of a pregnant female to necessitate the immediate abortion of her pregnancy to avert her death or for which a delay will create serious risk of substantial and irreversible impairment of a major bodily function.”

Because of how common D and E procedures are in the second trimester, advocates challenging the measure argue it effectively bans abortion in the state at 15 weeks. This would be devastating to patients in a state already besieged with anti-abortion restrictions.

The Bevin administration defends the measure twofold. First, attorneys for the state argue that providers can comply with the law by bringing about fetal demise using a separate procedure before performing the D and E. That would guarantee the “dismemberment” did not take place on a live fetus. But attorneys challenging the law argue that the state’s alternative procedures, like causing fetal demise by first transecting the umbilical cord—which, at this stage in fetal development can be as thin as a piece of yarn—are invasive, dangerous, and even experimental. Such mechanisms, lawyers say, expose patients to unnecessary risk and are contrary to standard medical practice.

Attorneys for the state of Kentucky counter the patient risk is minimal and not enough to override the state’s interest in banning a “brutal” procedure.

These arguments are all to be expected. Indeed, we’ve seen them in all the other D and E litigation in states like Texas and Alabama. In oral arguments before the Fifth Circuit Court of Appeals last week, Heather Gebelin Hacker, assistant solicitor general for the Texas attorney general’s office, opened her argument by describing D and E procedures in the following manner: “It is illegal to kill an animal that way in Texas, we wouldn’t execute a murderer that way, and notably the abortion providers don’t tell women that that’s what the procedure entails.” She suggested instead first injecting patients with potassium chloride or using suction to cause fetal demise, a method that Janet Crepps, senior counsel for the Center for Reproductive Rights, told the panel of Fifth Circuit judges was a method of fetal demise “fabricated by the state with no credible evidence to support it.”

Similarly, attorneys for the State of Kentucky told the court in a pre-trial brief, “It should go without saying that the brutality of a D&E abortion performed on a still-living unborn human being runs contrary to the values of modern civilized society, where the strong are supposed to protect the weak.”

By using language designed to incite emotion to describe a standard medical procedure, anti-choice advocates—and elected officials—are definitely following a familiar playbook in advancing these latest bans. And they’re running these plays in federal courts across the country.

But the State of Kentucky has taken its defense one step further. It argues that even if the ban does effectively ban abortion at 15 weeks for patients in the state that’s just fine, because those patients can travel out-of-state should they need a later abortion.

So far, a federal court has never accepted the argument that forcing patients to travel out-of-state for an abortion does not unduly burden abortion rights. Anti-choice advocates have, not surprisingly, tried to make this argument before too. In Mississippi, for example, anti-choice advocates tried to close the only clinic in that state via admitting privileges restrictions like the kind ultimately struck down as unconstitutional in 2016’s Whole Woman’s Health v. Hellerstedt decision. In the Mississippi case, the conservative Fifth Circuit said it was bound to consider the impact the admitting privileges would have—closing the state’s only clinic and thus forcing all patients in need of an abortion to travel outside the state—within the state’s borders only. It admitted that its decision, that the law was unconstitutional, would change if it could consider the availability of clinics outside of the state.

Unlike the Mississippi admitting privileges case, though, letting Kentucky’s D and E ban take effect wouldn’t require all abortion patients travel out of state, just some of them. Inevitably, those patients would be some of the least likely to be able to travel, as many are already pushed into a later abortion because they are trying to come up with the funds to afford the procedure itself, including wages lost from time off work. Will that difference be enough for a federal court to allow Kentucky to pass off to another state its constitutional obligation to avoid unduly burdening abortion access?

It shouldn’t be. But with a federal judiciary that can only be described as increasingly hostile—if not outright combative—toward abortion rights, nothing is guaranteed these days.

Just look at the decision from the 11th Circuit Court of Appeals that recently and very reluctantly upheld a lower court decision to block Alabama’s D and E ban. The entire decision reads as a clarion call to the Supreme Court to overturn Roe and Casey and let states enact whatever abortion restrictions they please. These judges want to rule against abortion rights, and they are begging the Roberts Court to give them an opportunity to do so. Indeed, attorneys for the State of Alabama plan to appeal that decision to the Supreme Court.

The Kentucky trial is expected to last through the end of the week with a decision soon thereafter—though no matter the outcome, an appeal to the conservative Sixth Circuit Court of Appeals is all but given. A decision from the Fifth Circuit in the Texas case, meanwhile, is probably a few months out; a trial challenging Louisiana’s D and E ban is scheduled to start in September. A challenge to an Arkansas measure is pending before the Eighth Circuit Court of Appeals as well.

Of course, there’s no guarantee the Roberts Courts takes any of these cases. It is entirely possible that the appeals courts remain united in affirming that all these bans are unconstitutional. That’s what should happen. But conservatives have not spent tens of millions of dollars and broken damn near every political norm to put radically anti-choice judges on the federal bench for nothing—and the D and E ban litigation is the first real look at what kind of return on that investment the anti-choice lobby will get.