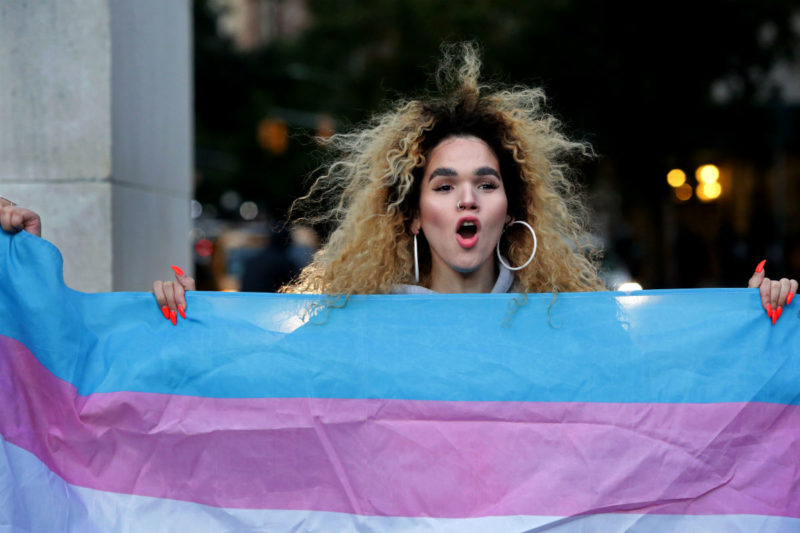 The New York Times on Sunday reported that the U.S. Department of Health and Human Services (HHS) is advocating a radical shift in interpreting federal civil rights law that would narrowly define gender as an unchangeable condition determined “on a biological basis” and identifiable as only “male or female,” in an effort to further its attacks on transgender rights.

The story offered only a few specifics, all of which are concerning. But none of them immediately change one simple fact: Federal law protects transgender rights. It just does.

The Times says it has a copy of a leaked memo, circulating in various federal agencies since spring, detailing the policy shift. The memo reportedly argues that certain key government agencies need to adopt an explicit and uniform definition of gender specifically tied to biological sex for purposes of interpreting Title IX of the Education Amendments Act, the federal law that bans sex discrimination in schools and universities that receive federal funding. That definition, as reported by the Times, would declare “a person’s status as male or female based on immutable biological traits identifiable by or before birth,” like genitalia.

“The sex listed on a person’s birth certificate, as originally issued, shall constitute definitive proof of a person’s sex unless rebutted by reliable genetic evidence,” the Times reports the memo as stating.

According to the Times, HHS proposes that any dispute about one’s sex would have to be resolved via genetic testing.

To be clear, the proposed change described by the Times should raise all sorts of alarms—and not just because the federal government is proposing making individuals “prove” their gender identity through genetic testing in order to grant or deny them access to public spaces, government services and benefits, and equal protection under the law.

The timing matters too. The Trump administration is currently considering revising two different rules that deal with gender-identity discrimination claims under existing federal civil rights law. One is the Department of Education’s rule dealing with how schools and colleges that receive federal financial assistance handle complaints of sex-based discrimination. The Obama administration had issued guidance for schools and colleges under Title IX that clarified the processes schools were to use and the protections in place for both those making Title IX complaints and those facing them. But in September 2017, Secretary of Education Betsy DeVos announced her agency was rescinding that guidance and replacing it with different guidance that would roll back many of the those Obama-era protections for students and staff who raised claims of sex discrimination and harassment.

The administration now seeks to turn that guidance into a formal rule, the actual text of which has not been officially released yet.

Another regulation currently under review by the Trump administration is Section 1557 of the Affordable Care Act (ACA), which bans sex discrimination in the delivery of health-care services, including transition-related care. In December 2016, the ultra-conservative federal judge Reed O’Connor in Texas blocked the administration from enforcing Section 1557. The Justice Department under Attorney General Jeff Sessions did not appeal that ruling, meaning that ACA provision remains blocked from federal enforcement by the government. The ruling did not, however, block private right of action, so transgender patients willing and able to bring individual discrimination claims—which can be expensive and time-consuming—can still do so unless and until the law is changed.

Both the Title IX and Section 1557 updates are expected to be released sometime this fall. When that happens, it will trigger the notice and comment period under the Administrative Procedure Act, the federal law that governs agency action. That period usually runs for 60 days and allows the public to weigh in on any proposed rule changes by the administration. Once that comment period closes, the administration is supposed to read and consider all the comments before issuing a final rule. That final rule has the effect of law—meaning it can be enforced by courts even though it is not a statute passed by Congress. Final rules typically take effect 30 days after they are published.

Should the administration follow this course, we could see final agency rules on Title IX and 1557 set to take effect before next summer. Those rules could include the new definition of sex proposed in the HHS memo. If that happens, a legal challenge to one or both of the proposed rule changes would likely soon follow.

Sessions hasn’t commented on the Times report, but there’s no reason to think his office would disagree with this radical re-definition by HHS. In October 2017 Sessions circulated a memo to United States Attorneys “clarifying” that Title VII of the Civil Rights Act’s ban on sex discrimination did not prohibit gender-identity discrimination per se, departing both from federal court precedent and even the Equal Employment Opportunity Commission’s own holding. HHS’ proposed change to Title IX tracks with Sessions’ “clarification” of how the administration understands sex discrimination protections under Title VII.

The Times also reported that HHS has called on the other agencies that enforce Title IX, like the Departments of Education and Labor, to adopt this definition in agency regulations in order to “increase the likelihood that courts will accept it.” Agency uniformity is important, because it helps drive policy change. The more quickly federal agencies are all on board with a shared understanding of how a particular law is to be enforced, the sooner those enforcement actions happen and longer-term social change can begin to take place.

As Adam Serwer so rightly noted in the Atlantic, for this administration and its supporters, the cruelty is the point of their policies.

This attempt to re-define sex and gender for the sole purpose of denying civil rights is nothing short of cruelty. And it is cynical, too. Federal courts are in near-uniform agreement that anti-transgender discrimination is a form of sex discrimination under Title IX—and Title VII, for that matter. In other words, the courts have largely continued to agree that federal law protects transgender rights. Yet the HHS memo reportedly ignores that mountain of precedent and relies instead on O’Connor’s outlier decision to say there’s conflict among the courts. There is no real conflict among the courts here, and HHS knows it.

The administration’s attempts to roll back civil rights protections likely won’t stop with attacking transgender rights. The Times reported that for the last year HHS has “privately argued that the term ‘sex’ was never meant to include gender identity or even homosexuality.” The U.S. Supreme Court has before it right now cases that ask it specifically to rule on whether or not federal civil rights laws protect against gender-identity discrimination and sexual orientation discrimination. The Court hasn’t decided if it will take up either, but it could still do so. And how the administration positions itself on this issue could affect that decision. If the Trump administration argues both that the federal courts are in disagreement and that it believes sex discrimination does not cover claims of gender-identity or sexual orientation discrimination, there’s a good chance the conservative majority will willingly take up the cases to make such a ruling. And such a ruling would mean that the law no longer protects trans people.

The Supreme Court could also decline to take up the cases at this time, letting the rule-making process and likely legal challenges unfold. That would delay the Court from ultimately settling the question as to what extent gender-identity and sexual orientation discrimination are unlawful forms of sex-based discrimination. But the Court won’t be able to avoid answering these questions for long.

For the time being, that leaves a lot of uncertainty: uncertainty around what the administration has planned for transgender rights and when it will let the rest of us know. But we do know two things. We know that the administration will use every available tool to try and upend legal protections for LGBTQ people—so whenever these proposed changes are formally announced, and whatever they happen to contain, they will not be good. And we know that the federal courts have largely prevented them from doing so. At least, for now.