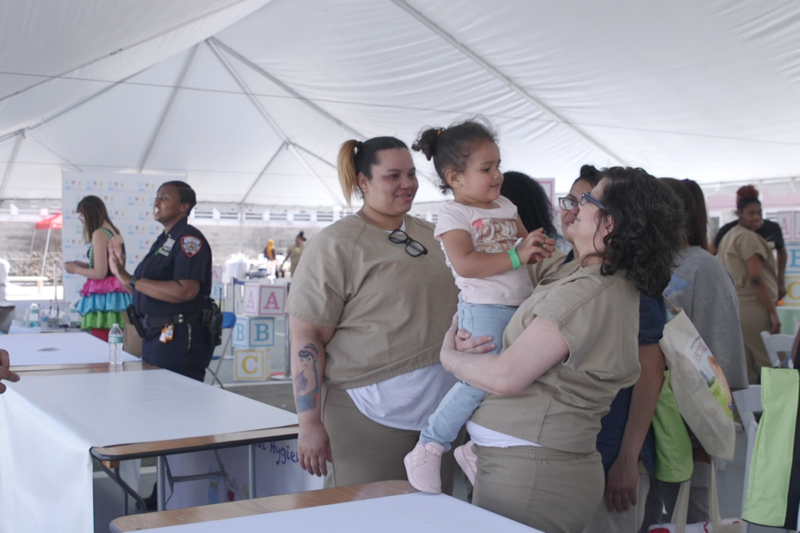 Unlike regular visitations, which are indoors and more controlled, the outdoor event drew hugs, smiles, and tears as kids played games, sang songs, read stories, and climbed into their mothers’ arms at the Rose M. Singer Center, the women's facility on Rikers Island that houses about 485 people. Marc Faletti / Rewire.News

While the Trump administration took children from their parents at the southern border, New York City on Tuesday reunited jailed women with their kids in a unique family event on Rikers Island.

Angela Clemente, a 29-year-old detainee from the Bronx, told Rewire.News she couldn’t sleep she was so excited to see her two children. When she did, it was “an emotional roller coaster,” especially as her youngest is one, and so different from the baby she left behind this winter.

“It’s not easy being in here away from your family at all. I’ve cried the whole eight months being in here without my kids,” she said. “I was very happy [to see them]. I actually cried.”

Unlike regular visitations, which are indoors and more controlled, the outdoor event drew hugs, smiles, and tears as kids played games, sang songs, read stories, and climbed into their mothers’ arms at the Rose M. Singer Center, the women’s facility on Rikers Island that houses about 485 people. About 37 of its low-risk inmates participated in the “baby shower” initiated three years ago by New York City’s first lady Chirlane McCray.

McCray, who read books and sang with a group of visiting toddlers under a large tent, told Rewire.News this was the biggest and best event she has seen of the many she has organized around the city.

“It’s in response to the fact that most of the women who are incarcerated are mothers. I didn’t know that. Most of them are mothers or caretakers, which means that they’re the ones who are supposed to be keeping the families together,” she said in an exclusive interview at Rikers Island. “We know that when children are separated from their mothers at a young age, it has life long consequences. It is not our intent to be damaging, or breaking the bonds of these families.”

This is in stark contrast to the Trump administration’s “zero-tolerance” approach at the border that has separated from their families and detained more than 2,300 migrant children since May, including babies and toddlers jailed in “tender age” facilities.

It’s hard to see children being taken away from their families, said Angela Gonzalez, a Department of Corrections (DOC) officer at Rikers. “It’s very painful, not only for the women, but it’s the kids. They take it hard because they don’t understand what’s going on,” she said.

That made the baby shower so much more meaningful this week, attendees said.

Winette Saunders, deputy commissioner of Young Adult and Youthful Offender Programming at the DOC, said the event was an opportunity for the city to celebrate parenthood and families. “The department has embarked on a number of new initiatives to really ensure women understand and men understand that [being incarcerated] is not an excuse not to be a parent. And so we want to create opportunities like this … to really ensure that parents can be parents, even under these circumstances.”

She said 82 percent of the Rikers population are detainees, “which means they are innocent until proven guilty and that we are not the judges.”

Asked what she thought of the federal policy of separating families at the border, Saunders said, “The department really prides itself on using evidence-based research to guide its policies, and the research shows that families who remain engaged during incarceration really reduces the rate of recidivism greatly.”

The same sentiment was expressed by some attending members of community groups and health and advocacy organizations that set up booths at the baby shower, giving out information and gifts.

Tanya Krupat, program director of the Osborne Association New York Initiative for Children of Incarcerated Parents that focuses on improving visiting for families overall, told Rewire.News she has worked with children of incarcerated parents for 20 years. Research shows it is traumatic for a child to be separated from his or her parents—not just in the moment but often with long-term and lifelong adverse effects, she said.

To implement separation, the way the Department of Justice policy is doing at the border is “unimaginable” and painful,” Krupat said. “So a day like today just underlines how a policy like that should be halted immediately. Children should never be separated when we have other options.”

Mothers often don’t want their young ones brought for regular jail visitation, so they go without seeing, holding, or being with their loved ones, which hampers their mental health and re-entry efforts.

Even with such a positive event, families face roadblocks. Among the visitors Tuesday was a grandmother with her leg in a cast who brought the baby of an incarcerated woman. Advocates said the cab to Rikers cost the grandmother $35 and will probably cost her the same going home, which is money taken away from food for the kids and accepting phone calls from jail. There’s a lot more that could be done to support families, they said.

But for many, it was a day unlike any other. It was easy to see how inmates in their khaki outfits forgot where they were, as did their families, as they colored, hula-hooped, played cornhole, and shared meals on a hot summer day.

“There’s nothing but smiles and laughter all around the place. It’s a beautiful thing to reunite with your kids. We don’t really get this every day,” she said. “I’d appreciate it if this program would expand everywhere in the United States, especially the men’s jails as well.”

The children were so much more at ease, happy, and spontaneous than at the last two events there, said McCray, who hopes to expand such programs citywide. “I think what we’ve done is lay a foundation that we can now build on,” she said. “Our goal is to close Rikers, but we really want to make sure that we never recreate an institution like this.”

The long-troubled jail is set to close within a decade and the city plans smaller jails in the boroughs that focus on “rehabilitation and wellness.”

“We want everyone to have a different kind of attitude about the time that they spend while they’re incarcerated, and we want programs like this to promote their re-entry, promote the bonding with their children, and their families, and to really just [have it] be a short time during which they actually get better,” she said.

McCray has announced a $6 million first-in-the-nation pilot offsite visitation program in partnership with the Children’s Museum of Manhattan as part of her efforts to address the unique needs of incarcerated women. These initiatives may well be models for the borough-based jails in the future, said Krupat, who supports improved programming, better conditions, and decreasing incarceration. “Certainly for a child, the best thing is to not have your mom or dad go away in the first place,” she added.

Following intense political and public pressure, President Trump signed an executive order late Wednesday claiming to end immigrant family separations. The order does not end the mass deportation and “zero-tolerance” policy, but rather creates a host of other problems.

Meanwhile, New York City officials want to make sure families get to be families, create memories, and forge strong bonds, even if they are detained.

“We want to bring the mothers outside to visit the children as well, and we don’t want to grow more children who are broken, right? We know that we have an opportunity while the women are here to help them raise healthy children. All the science says that we shouldn’t be separating them,” McCray said. “They’re at the border. They’re tearing families apart. Babies from their moms, toddlers, and even older children. Here, we’re trying to bring them together. It’s the total opposite. We have recognized the value of preserving these families’ ties to one another, to making sure that the moments that they have together are joyful, and enriched, and meaningful.”

As parents hugged their children in tearful goodbyes, Saunders said her favorite part of the baby shower is “always the children.”

“I love to see the smiles, the laughter, the fun, the bonds between the parents and the children. It never gets old to me. I love it and this is really the impetus for the work we do here,” she said.