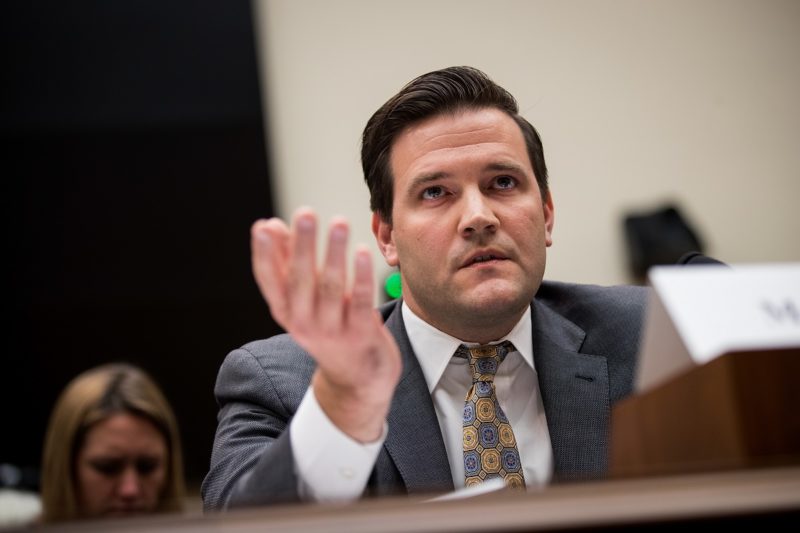 Conditions for pregnant people in ORR custody have only worsened under President Trump.  Drew Angerer/Getty Images

UPDATE, February 20, 10:52 a.m.: The congressional Pro-Choice Caucus scored a small victory on February 16 when the Office of Refugee Resettlement rescinded its directions to the Vera Institute of Justice requiring attorneys to withhold information from immigrant teens in custody about their abortion rights.

Congressional Democrats have joined the call for Office of Refugee Resettlement (ORR) Director Scott Lloyd to resign after a new report revealed that the Department of Health and Human Services (HHS), the agency that oversees ORR, instructed attorneys working with immigrant minors in ORR custody not to inform teens of their right to abortion care.

The Washington Post first reported that the the legal services group, the Vera Institute of Justice, which receives $57 million a year under a five-year contract with the federal government, was instructed via a phone call from a government analyst working within ORR “to ensure that Vera’s legal services providers are not talking to children in HHS custody about abortion.”

Leaders of the congressional Pro-Choice Caucus said Lloyd has shown an “ongoing, blatant disregard for women’s constitutional rights,” asserting that Lloyd has abused his powers, bullied young, immigrant women, and denied them their rights. The congressional leaders are demanding Lloyd’s ouster.

“It was not enough for Scott Lloyd to block young women from making their own medical decisions, or to unlawfully notify guardians who had threatened their physical safety. Now, Lloyd is gagging their lawyers from even discussing their legal right to safe, legal abortion,” Dana Singiser, vice president for public policy and government affairs for Planned Parenthood Federation of America, said in an email to Rewire.

Vera works with 38 organizations in six regions to provide legal help to immigrant minors who migrate to the United States alone. An estimated 50,000 minors in federal custody benefit from Vera’s legal services program and in most instances, it is their only chance to consult an attorney and access legal guidance. Immigrants—including children—are not entitled to government-appointed lawyers. In the United States, toddlers are forced to represent themselves in immigration court.

Vera official Anne Marie Mulcahy this month instructed attorneys “to immediately strip references to abortion from ‘Know Your Rights’ legal pamphlets,” according to the Washington Post. Many of the girls and young women in ORR’s care are pregnant as a result of being raped on their journey to the United States. Eighty percent of Central American women crossing Mexico en route to the United States are raped along the way, according to a 2014 report from Splinter.

Thirty-percent of the approximately 7,700 minors in ORR custody are girls, often fleeing gender-based violence and coming from countries where abortion is illegal. Many may not know that abortion is a right in the United States, especially if their attorney fails to inform them of this fact. Mulcahy instructed attorneys that children with abortion-related questions could be referred to attorneys not funded by the government, creating another obstacle for those seeking abortion services.

“By barring organizations that provide counsel to young immigrant women in the custody of HHS from even discussing abortion, this administration is directly interfering with the personal medical decisions these women have a constitutional right to,” Singiser said. “This exemplifies how the Trump-Pence administration is imposing its extreme anti-women and anti-abortion agenda at every turn—especially on women already facing discrimination.”

Conditions for pregnant people in ORR custody have only worsened under President Trump.

In March 2017, the Trump administration implemented a revised policy “that allows [shelters] to wield an unconstitutional veto power over unaccompanied immigrant minors’ access to abortion,” according to court documents. This directive explicitly prevents unaccompanied immigrant minors in their care from obtaining abortions by prohibiting all federally funded shelters from taking “‘any action that facilitates’ abortion access to unaccompanied minors in their care without ‘direction and approval’” from Lloyd.

This wave of “anti-choice fanaticism” working its way into the immigration system was first illustrated by the case of Jane Doe, a pregnant unaccompanied immigrant teen in ORR custody who was essentially “held hostage” for wanting to access abortion care. After a lengthy legal battle, the Salvadoran minor was able to have receive abortion care, but similar cases have emerged in the months since.

Much of what is happening to teen girls in ORR custody can be traced to Lloyd, who advocates see as having an “obsession” with pregnant immigrant minors, one that is shaping federal policy. Lloyd has weaponized his religious beliefs to deny care to immigrant girls, and his published writings mirror the talking points of anti-choice extremists and men’s rights activists.

Emails released by the ACLU as part of Jane Doe’s court proceedings also revealed how entrenched anti-choice extremism has really become within ORR. Lloyd is an anti-choice radical, and nothing in his background indicates he is qualified or equipped to lead ORR or to “counsel” pregnant people in ORR custody against seeking abortion care, which he admitted to doing when speaking to the Christian Broadcasting Network.

It appears as if HHS’ new secretary, Alex Azar, will support Lloyd’s unconstitutional and unlawful actions. During a House Energy and Commerce Committee hearing yesterday, Azar was pressed by Rep. Diana DeGette (D-CO) about whether he would crack down on Lloyd. In his response, Azar said his agency has a “very important … obligation, which is to look out for the health and welfare of [immigrant teens] and their unborn children.”

In December, after previously-sealed court documents revealed that Lloyd seemed to assert there should be a rape exception beyond the scope of federal law, advocates called for the director to be fired. That call is getting louder.

This week, NARAL Pro-Choice America released a statement that said Lloyd and Trump’s “anti-choice administration” are imposing “extreme, fringe ideology” upon women, and that “Scott Lloyd has got to go immediately.”

“We have known for some time that Scott Lloyd freely abuses his power in the most egregious way: denying those in his care their rights in order to advance his own extreme ideology,” Kaylie Hanson Long, NARAL Pro-Choice America national communications director, told Rewire in a statement. “From trying to intimidate young women—including an undocumented rape survivor—in an effort to restrict their constitutional right to abortion care, and reportedly telling organizations they can’t mention abortion to minors in his custody, his insidious attacks on women are relentless.”

In a statement to Rewire, the National Latina Institute for Reproductive Health (NLIRH) called for “the immediate removal” of Lloyd.

“Lloyd is woefully unqualified to protect those who come to our country fleeing violence and persecution, and has used his position as ORR director to advance his own personal religious agenda to prevent young people from accessing abortion care. ORR has a legal obligation to provide prompt access to safe medical care to those within its charge, and thus we demand that ORR immediately restore access to comprehensive reproductive health care services and information, including abortion, for the thousands of young immigrants in their custody,” said Jessica González-Rojas, executive director of NLIRH.

There is a growing understanding by the public that immigrant rights are a reproductive justice issue, in part because of the unprecedented attacks the Trump administration has made on immigrant girls and women in federal immigration custody.

Under Trump, Immigration and Customs Enforcement (ICE) has stopped following its own policy for quickly releasing pregnant people in detention. Fine print in the administration’s proposed 2019 budget also revealed the possibility that ICE agents could dictate whether immigrants paying for abortion care out-of-pocket make it to their doctor’s appointments.

“It shocks the conscience that this administration sees young immigrants’ lives as simply another battlefield upon which to wage its ideological war against reproductive health care,” González-Rojas said.