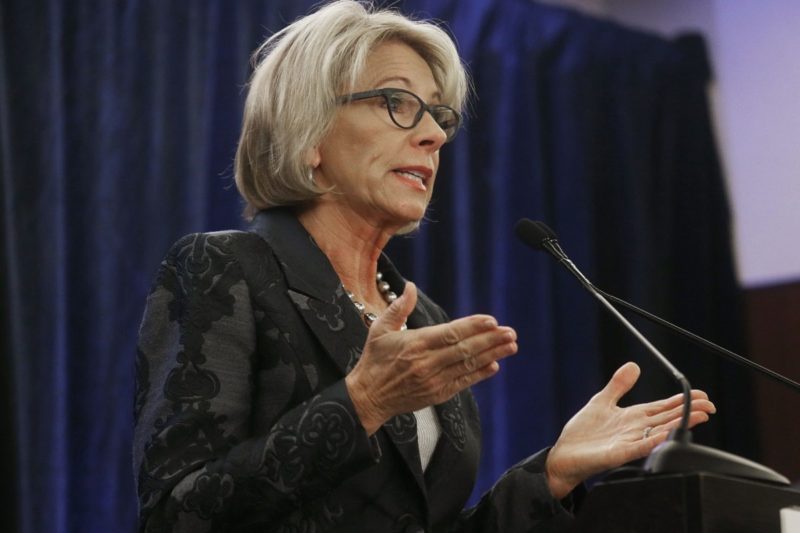 Regardless of what Betsy DeVos does or says, she does not have the power to create new laws or override existing ones. Mario Tama/Getty Images

Sexual violence advocates, survivors, and allies are reacting strongly to the rollback of Title IX guidelines by the Trump administration. There are a few things we think survivors should know.

Secretary of Education Betsy DeVos warned that she would not protect the Obama-era guidelines that helped schools establish systems and policies for investigating allegations of sexual misconduct. As early as January, during her confirmation hearings, DeVos said she would not commit to protecting those guidelines.

She made good on her remarks and replaced two letters of guidance from 2011 and 2014 with an interim Q&A on September 22.

There Were Problems With Title IX Before the Rollback

The idea that universities should prosecute sexual misconduct on campus as Title IX violations was originally supposed to be a supplement to the criminal justice system. Students can report to both their school and the police, but it is also an option to report just the crime (to the police) or the civil rights violation (to the school). For some survivors, turning to the criminal justice system is not a feasible option. Schools are required to take all the necessary steps to protect and support survivors, but the criminal courts often don’t do the same.

DeVos has implied that a central problem with the Obama administration’s guidelines is that the accused are unjustly punished, but more commonly it is the victim who is silenced and unfairly treated.

Since the Obama-era guidelines, universities and colleges had to have regulations in place on how to handle these situations, but they could determine the policies themselves. The guidelines for determining fault were subject to the whims of the university which, in some cases, has turned this process into a quasi-court. It’s easy to understand how self-governed policies could fail survivors when set in the context of a culture that is rife with victim-blaming, rape apologists, and a stunted understanding of mental health and trauma.

Roslyn Talusan, sexual violence activist and feminist writer, spoke to Rewire in a Twitter interview. Talusan stressed that before you can do anything, you must be gentle with yourself and practice self-care. She explained that taking care of yourself can look like “going for a manicure, putting extra cheese in your pasta, making sure you take meds, or have a sip of water.”

Your Experience Is Valid

When I was raped in college, I didn’t know it was rape. I was drunk and my rapist was not under the influence. I could not consent while in that state of belligerent drunkenness. I never reported it and pretended like it had never happened. It took me years to understand and accept that I had survived rape.

During and after assaults, survivors and victims will have diverse reactions. There is no wrong way for your body to react during a traumatic event, because it is doing what it knows to do. It is survival in its most basic form. Some people will freeze during the assault, others will fight, and others will have consented up to a certain point and then withdrawn consent without the perpetrator respecting it. Whatever happened to you, whatever you did, whatever you didn’t do, you did all you could in that moment and that is enough. You are enough.

Talusan offered a poignant reminder to remain true to your own lived experience during this time: “I think the most important part is not letting this administration distort your truth. This administration is everything [sexual violence] activists have been working against. The changes they’re trying to make doesn’t mean what happened to us never happened or that our pain is invalid. It doesn’t make any of it OK. They’re trying to make it OK and acceptable but it’s not and never will be.”

Hold Schools Accountable for the Practices They Have Already Outlined

Some universities, such as Harvard, have decried the administration’s action and have stood firm in the steps they’re taking to improve their handling of sexual assault and harassment cases. Thanks to the 2011 guidelines, universities and colleges were pressured into regulating their process for responding to accusations of sexual assault. Schools need to be held accountable to the guidelines already in place.

Some States Have Already Enshrined Guidelines Into Law

Multiple states—such as California, Illinois, and New York—have passed legislation that, as an article in Inside Higher Ed explains, “cemented into state statute portions of federal guidance on how colleges should handle sexual assault cases.” For the time being, universities will continue to be beholden to the legal standards of their respective states.

It Doesn’t Change the Law

Supreme Court rulings have determined that sexual harassment is a violation of Title IX. Justice Sandra Day O’Connor wrote in a 1999 decision, “In the context of student-on-student harassment, damages are available only where the behavior is so severe, pervasive, and objectively offensive that it denies its victims the equal access to education that Title IX is designed to protect.” The Obama-era guidelines were provided to clarify how to handle the Supreme Court interpretation. The guidelines also made schools aware that if they did not comply, they risked losing federal funding.

Regardless of what Betsy DeVos does or says, she does not have the power to create new laws or override existing ones. The Obama-era guidelines laid out in the 2011 “Dear Colleague” letter were not laws either. The letter provided guidelines and clarifications about existing Title IX rules.

The New Guidelines Are Temporary

The interim guidelines, according to the Education Department, are not permanent. Caroline Kitchener wrote in a recent article for the Atlantic that “they are only temporary—the Education Department will adopt binding regulations after it consults with the public.” This means universities are not being encouraged to change their existing regulations yet and that any decisions made about non-compliance with Title IX under the previous guidelines are still valid.

Universities Can Still Face Financial Penalties Under the Clery Act

The Clery Act is a law that has been in effect since 1990 and has undergone multiple updates since then. The Clery Act is in place to protect students from crime on campus. Institutions of higher education that receive federal financial aid—this is almost every college and university—must show compliance to the law’s guidelines. Some of these requirements include producing an annual security report, providing time-sensitive warnings to students and employees, keeping public crime logs, and continually compiling crime statistics. Schools that do not comply face financial penalties.

If You Can Fight, Then Fight

Changes are happening and there are more to come. If enough people mobilize, this could be an opportunity to create trauma-informed policy that doesn’t model itself after criminal proceedings, which are inherently hostile to survivors. The criminal justice system doesn’t protect survivors or punish perpetrators. We need a new method and it needs to be trauma-informed.

Talusan asks survivors to first take care of themselves but goes on to say, “If you’re up to it, fucking fight. Call your reps and tell them how much you oppose the Title IX changes.”