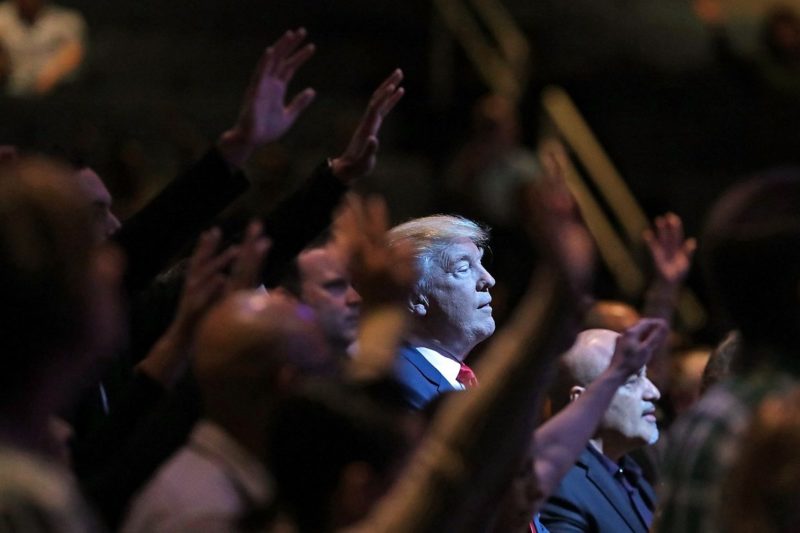 Despite his lack of understanding about basic biblical precepts (he's frequently said that he doesn't like to ask forgiveness, a central tenet of evangelicalism), Trump has managed to convince evangelicals that he has a newfound faith. Chip Somodevilla/Getty Images

The election of Donald J. Trump to the presidency was aided and abetted by a number of evangelical leaders who vouched for his faith with their cohorts. Even as Trump stood at the front of a Detroit church looking deeply uncomfortable, and as he cited the book of “Two Corinthians” instead of “Second Corinthians,” evangelical leaders insisted that he was a “baby Christian” who was just learning. He would mature, Focus on the Family’s James Dobson proclaimed, and his faith was genuine and real.

Closer to the election, Trump mocked his Methodist opponent and dismissed apparent sexual assault as “locker room talk.” But evangelicals continued to march in almost complete lockstep with the idea that Trump was a new man, a new creation in Christ. Though a few leaders sounded the warning bells, they were quickly drowned out by the choruses of four in five evangelicals who cast their votes for Trump.

Now, with the announced “spiritual biography” of Trump helmed by journalist David Brody, the evangelical whitewashing is nearly complete. Evangelicals crave narratives of redemption—of men finding God and forsaking all other paths—and a spiritual biography of Trump is sure to give them exactly what they need.

In an interview with the Toronto Star, Brody, the chief political correspondent for Christian Broadcasting Network, explains that he thinks Trump and evangelicals have a lot in common. While Trump isn’t going to win Christian of the year honors, Brody said, he has a faith that is “deeply rooted.” According to Brody, Trump still sees the world through an evangelical lens.

And this thinly supported proclamation in the form of The Faith of Donald J. Trump: A Spiritual Biography, to be released next January, is really all U.S. evangelicals need to throw themselves behind a man who once declared himself “very pro-choice” and said Planned Parenthood does “very good work”—proclamations that are anathema to evangelical America. Brody’s standing as a journalist in the community, and his book’s research and support of Trump’s spiritual life, is sure to make it a definitive statement on the topic of Trump’s faithfulness.

It follows, then, that if the president is on the side of the evangelicals, then that means God really does endorse their political ideas. Because of the Apostle Paul’s statements in Romans 13:1 (“Let every person be subject to the governing authorities. For there is no authority except from God, and those that exist have been instituted by God”), evangelicals believe that God has sovereign control over the path of the nation, and that God himself placed Trump in the presidency. Trump’s claims to Christianity—and Brody’s spiritual biography giving weight to those claims—only further evangelicals’ certainty that they have a righteous claim to the halls of power.

As the subject and co-author of The Art of the Deal, Trump is nothing if not attuned to how to say what people want to hear. Despite his lack of understanding about basic biblical precepts (he’s frequently said that he doesn’t like to ask forgiveness, a central tenet of evangelicalism), Trump has managed to convince evangelicals that he has a newfound faith. It’s no coincidence that Trump’s conversion to Christianity is pinpointed to approximately a decade ago, around the time Barack Obama was running for president for the first time—as Trump has clearly been preparing for this presidential run since that period.

Evangelicals are deeply invested in narratives of redemption. The idea that Christ makes all things new permeates their daily discourse, and is the central tenet of their worldview. One of the most common events in evangelical church services and retreats is the telling of the story of God’s grace in a person’s life. These testimonies have a plotted narrative arc: A person was a bad sinner, and then they read or encountered the Bible and God in some way, and now, while they are not perfect, they are a Jesus follower and nothing can deny that fact.

It is this narrative that evangelicals crave, as it confirms their image of God as victorious over tragedy, as the warrior doing battle to save precious human souls. If a person who used to be a drug dealer and a murderer, for example, can be saved by the grace of God, then God is powerful indeed.

And what better narrative to rehabilitate the image of a philanderer and abuser than to develop his story of conversion and faith in God for print? Here’s the catch: This narrative doesn’t necessarily have to be true to be believable—as long as it doesn’t stretch credibility too far and has enough grand gestures (which Brody hints will be covered in the book), evangelicals stand ready to support their broken, sinful leader as a great man of faith.

Even as Trump continues to golf instead of going to church, and makes statements opposed to the tenets of Christianity, he has supposedly claimed conversion and forgiveness in evangelicalism, and that washes away any and all sins. He’s not perfect, but evangelicals will support him as long as they can continue to have access to the halls of power. God has given them a great gift in Donald J. Trump, and if they have to do a little fudging of his spirituality to prop him up, then so be it.

To the outsider looking in, this whitewashing of Trump’s spiritual life is patently a ploy for political favor with an extremely powerful voting bloc. But to the evangelical concerned about the black and white fundamentals of who is and who isn’t with them, turning Trump into one of them, however flimsily, makes perfect sense. If Trump is a born-again Christian who just struggles at times, then they can ultimately assume that he has the best interests of the evangelical church at heart—interests that are distinctly white and male. They are concerned with ensuring people with uteruses do not have access to abortion, that other people’s sex lives are kept in check, and that transgender people are kept on the fringes where evangelicalism wants them.

And with evangelical darling Vice President Mike Pence endorsing and backing up the president’s alleged faith, evangelicals can sleep soundly at night knowing their agenda is protected by the grace of God himself. After all, the story doesn’t have to be true. It just has to be believed.