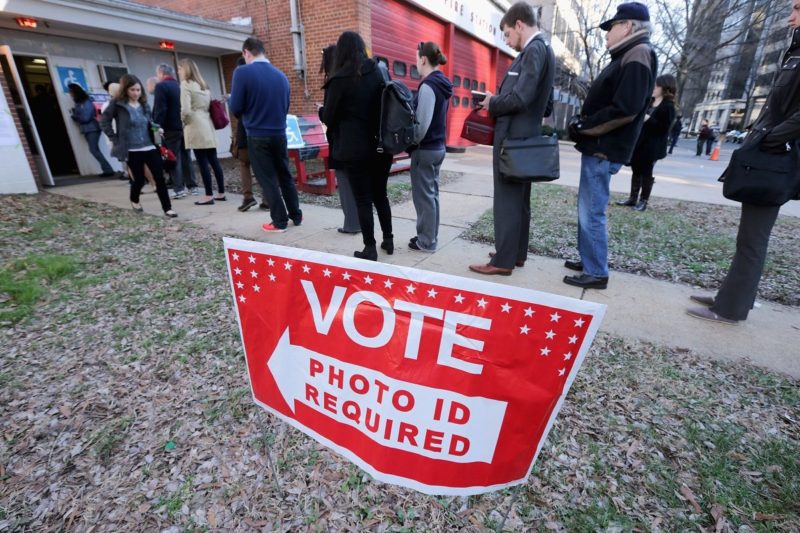 After a voter has been moved to an inactive status, their registration will be canceled if they do not update their voter registration or vote in an election over the next four years. Chip Somodevilla/Getty Images

More than 380,000 Georgia voters received a “purge notice” from their local board of elections under the direction of the Georgia Secretary of State’s Office, Rewire has learned through an open records request.

The ACLU sent a letter earlier this month to Secretary of State Brian Kemp and to the chairperson of the Fulton County Board of Registration and Elections alleging that these notices, when sent to voters who moved within the same county, violate the National Voter Registration Act of 1993. The letter requested more information about the notices that were sent out and officially informed the named officials of their intent to sue if corrective actions are not taken.

Fulton County resident Stacey Hopkins received an official piece of mail on July 3 informing her that, “If you do not return the attached card within 30 days, you will be moved to an inactive [voter] status.”

“I opened the notice, it was on July 3 right before Independence Day,” Hopkins told Rewire in a July 14 phone interview. “And I opened it and I read the first line and to be honest the first thing my mind said was, ‘This is bull.’ Because of the work that I’ve done doing voter registration in the state and being a part of a coalition of voter empowerment and civic engagement groups, I immediately recognized it for what it was.”

According to the notice, there are three reasons voters might be asked to verify their voter registration: they filed a change of address request with the United States Postal Service, they have not voted in the past three years, or official election mail has been returned to the elections office.

The 380,000 figure provided by the secretary of state’s office only reflects voters who received a notice because they filed a change of address request. This represents about 6.5 percent of all active, registered voters in Georgia.

The postal service maintains a National Change of Address (NCOA) list, which it shares with all states. States are required under federal law to have a process to maintain their voter rolls, and using the NCOA information as part of this process is legal, as is doing regular voter list maintenance. Voters who do not respond to the notice will become “inactive,” which does not prevent them from voting but is the first step toward removing someone from the voter rolls.

Candice Broce, the press secretary for the Georgia Secretary of State’s Office, told Rewire in an email that, “Inactive status does not prevent a voter from voting, and it does not make it more difficult to vote. No one is being removed from the rolls as part of the NCOA process. Contrary to the ACLU’s characterization of this process, it is no ‘purge.’”

Hopkins, the ACLU, and the Secretary of State’s Office agree on one point: Being an “inactive” voter does not impact a voter’s ability to cast a ballot.

“Being an inactive voter does not mean I am off the voter rolls, but it is the first step to taking me off. And I’ve had enough of that,” Hopkins said.

After a voter has been moved to an inactive status, their registration will be canceled if they do not update their voter registration or vote in an election over the next four years. There is a separate lawsuit, filed by Common Cause Georgia earlier this year, challenging the policy of changing voter registration status simply for not voting. The organization is currently appealing a lower court’s decision to throw out the suit.

Hopkins and the ACLU are challenging the legality of these notices being sent to voters who moved within the same county. When voters are still covered by the same board of elections—which in Georgia is handled by the counties—they fall under a different set of rules as part of the National Voter Registration Act of 1993 than voters who move to a new county. The Georgia Secretary of State’s Office was unable to provide Rewire with data about how many of the 380,000 notices went to voters who moved within the same county.

“Once you are registered, it should be very difficult to get someone off the rolls. And that was the whole intention of the National Voter Registration Act. And what they are doing is putting the onus [on voters] to take further action, but they are already registered,” Hopkins said.

Broce, the press secretary for the secretary of state’s office, told Rewire by email that, “It has literally never been easier to get registered to vote in Georgia,” [original emphasis maintained] citing the myriad ways voters can register: on its website, on a smartphone app, with a paper application, or through a new texting program its office has piloted.

But the landscape of voting laws in Georgia looks very different than it did a decade ago, and Kemp, the top election official in Georgia and a candidate for governor, has been the subject of criticism over his handling of the voting process. His office settled a lawsuit in February over the use of a controversial “exact match” program that prevents voters from registering if there is even a small discrepancy in the voter’s information on their ID compared with their registration. The lawsuit noted that although Black applicants only made up about one in three voter registration applicants from 2013-2016, they comprised almost two-thirds of the rejected applicants based on the “exact match” voter verification technique. Latino and Asian-American voter registration applicants were similarly disproportionately impacted by the policy.

However, state legislators revived the use of a similar matching protocol less than a month later, much to the chagrin of the voting rights groups involved in the lawsuit. That law went into effect July 1.

Georgia’s history with controversial voter suppression tactics goes back even further. The state was one of the first to implement a restrictive voter ID law in 2007 under then-Secretary of State Karen Handel. A recent Washington Post analysis of voter turnout across multiple election cycles in states with strict voter ID laws points to the negative impact these laws have on people of color and those with low incomes.

Until the landmark 2013 Supreme Court decision in Shelby County v. Holder, Georgia was subject to the Department of Justice’s (DOJ) preclearance program, which required certain states and municipalities with histories of voter suppression to submit changes to voting laws to the DOJ for approval.

Asian Americans Advancing Justice Atlanta has been involved with lawsuits against Kemp, including one challenging the “exact match” protocol this year. Raymond Partolan, Advancing Justice’s program associate, told Rewire the organization provides language assistance and other support to Asian American voters that the Secretary of State’s office could provide.

“Over 40 percent of Asian American adults that live here in the state of Georgia are what we call limited english proficient, or LEP,” Partolan explained. “So whenever people like the secretary of state or the county elections office send out these notices and they’re in English, people don’t generally know what they are talking about. And it disenfranchises thousands of people.”

Although there are federal laws that require elections bodies to provide accessible materials for language minorities, Asian American communities may not qualify because they represent a huge diversity of languages.

“In the United States, Asian Americans represent over 30 different countries and speak over 100 different languages. This makes our work that much harder,” Partolan said.

Advancing Justice is working with the ACLU on a related but separate letter to Kemp and to the chairperson of the Fulton County Board of Registration and Elections arguing that the “purge notices” violate the National Voter Registration Act. Under federal law, the ACLU must wait 90 days after sending an official notice of intent to sue before filing a lawsuit.

Broce wrote in an email that the secretary of state’s office plans to defend their work.

“This is not the first time that our processes have been challenged, and I doubt that it will be the last. Nonetheless, it is our duty to keep the voter rolls up-to-date, and we will vigorously defend this duty in the face of opposition,” Broce wrote.

Although Hopkins and the ACLU have not received a response to their letter from Kemp’s office within the three business days required by Georgia law, the Kemp for Governor campaign sent an email to supporters two days after the letter was sent asking for donations. The email said that “[T]he ACLU threatened to sue me for keeping our voter rolls clean. Unfortunately, this is the new normal. When special interests groups don’t get their way at the ballot box, they feign outrage, spread fake news, and file lawsuits.”

“If Secretary of State Brian Kemp is using this for fundraising, I guess that’s a sign we are in for a long, protracted fight,” Hopkins said after being told about the fundraising email.

UPDATE: This piece has been updated to clarify the status of Common Cause’s lawsuit and to note who received the notices.