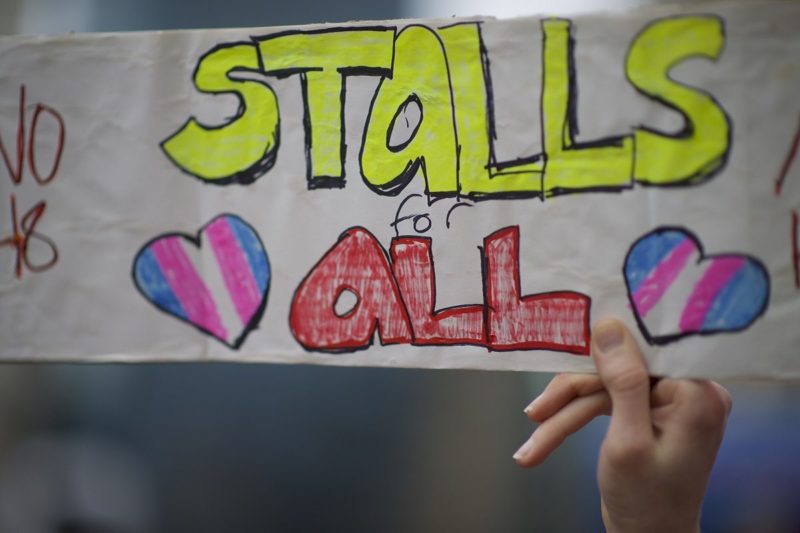 HB 142 forbids state agencies from regulating access to multiple-occupancy restrooms, showers, or changing facilities unless it is “in accordance with an act of the General Assembly.” Mark Makela/Getty Images

The Department of Justice, along with attorneys for the state of North Carolina, on Friday dropped their dueling lawsuits challenging the legality of HB 2, the bathroom discrimination bill that prohibited transgender people from using public accommodations aligning with their gender identity.

In the wake of HB 2’s passage in May 2016, the Obama-era Justice Department, with then-Attorney General Loretta Lynch at the helm, filed a lawsuit against North Carolina and then Gov. Pat McCrory (R) challenging the legality of the anti-transgender law. The state of North Carolina then filed its own lawsuit against the Justice Department, defending the law.

The legal backlash, along with a sharp public outcry, led the GOP-majority North Carolina legislature to repeal the law and replace it with HB 142. Gov. Roy Cooper (D), who beat McCrory in November thanks in large part to McCrory’s support for the discriminatory measure, signed HB 142 into law on March 31. The Justice Department cited this repeal as reason for its withdrawal.

Advocates say that HB 142 isn’t enough and are calling it a fake repeal.

HB 142 forbids state agencies from regulating access to multiple-occupancy restrooms, showers, or changing facilities unless it is “in accordance with an act of the General Assembly.” The law still prohibits local municipalities from passing nondiscrimination ordinances related to private employment practices or regulating public accommodations until 2020.

In a scathing editorial, the the Charlotte Observer’s editorial board called HB 142 a repeal “in name only” and wrote that “it is a betrayal of the promises the governor made to the LGBT community and an entrenchment on discrimination by Republican legislators who have backed it all along.”

“House Bill 142 literally does not do one thing to protect the LGBT community and locks in HB2’s most basic and offensive provision,” the Observer’s editorial board said.

“The Trump administration may want to use the fake repeal of HB 2 as an excuse to further turn their backs on the transgender community, but the rest of us aren’t going to give up that easily,” James Esseks, director of the ACLU’s LGBT Project, said in a statement.

“We’ll continue this fight as long as it takes to truly strike down this disastrous law for good.”