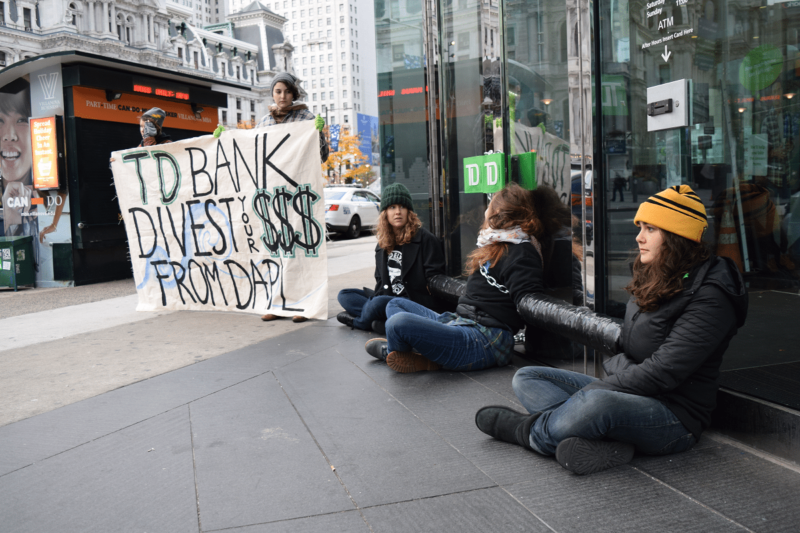 The participants in Monday’s action called on TD Bank to withdraw its portion of a $2.5 billion loan to complete the pipeline project. Cayley Dittmer

Six people were arrested Monday in Philadelphia after three women barred the doors to TD Bank with a “TD Bank Divest your Money from DAPL” banner, leading a protest opposing the Dakota Access pipeline project.

The action comes a day after police in North Dakota attacked protesters with water cannons and rubber bullets in freezing weather.

About 400 protesters in North Dakota faced officers from the Morton County Sheriff’s Department in a standoff Sunday night that was described as “very aggressive” by officers on the scene, according to a statement from the sheriff’s department. By midnight, there were reportedly more than 160 injured, including a 13-year-old hit in the face and two people who suffered cardiac arrests.

“It is far beyond ironic that we are being persecuted for protecting our land that was stolen from us. Our people are tired and sick. Our people are done with sacrificing our self-determination for the profits of billionaires,” Dallas Goldtooth, an organizer with the Indigenous Environmental Network, said in a video produced by Fusion. “For a lot of us it is just a continuation of 500 years of resistance against colonization and state oppression where we are merely doing what our ancestors did. It hurts so deeply that in the same place that our ancestors struggled for their lives, we are still struggling today.”

Protesters in downtown Philadelphia on Monday morning chained themselves to the TD Bank entrance, halting business for about three hours and attracting more than 20 bystanders. The protesters cooperated with police but refused to leave until they were arrested, Pilewski said.

“We feel strongly that the pipeline project should be stopped,” Chris Pilewski, a student activist at the University of Pittsburgh who participated in today’s action, told Rewire. “Indigenous rights have been violated in this country for a long time. The Natives have a right to protect their land and water and the women protesting there are an inspiration to all of us.”

“We are responding to the call for direct action made by indigenous women to defend Native sovereignty and water,” Jessica Rohan, one of the protesters, said in a press release from Greenpeace. “In the past 24 hours, the non-violent actions of Water Protectors have been met with tear gas, concussion grenades, and water cannons. We’re here to tell TD Bank that destroying indigenous land and poisoning the water of thousands of people is bad for business.”

TD Bank is one of the banks financing a $2.5 billion loan to complete the pipeline project. Citibank, Bank of Tokyo-Mitsubishi UFJ, and Mizuho Bank are three others, according to Greenpeace.

The participants in Monday’s action called on TD Bank to withdraw its $130 million portion of the loan and to stop financing the pipeline.

“The construction of this pipeline violates indigenous rights, it violates human rights, and it threatens the water supply of millions of people,” Abigail Meinen, another participant, said in the release. “Indigenous women have led the fight against this pipeline from the beginning. They are the guardians of the water, the life-giving force of the Earth. Today, as a group of women, we have come together in solidarity with our indigenous sisters, mothers, and elders, and say that we will fight with you.”

DNB, the largest bank in Norway, sold off its assets in the Dakota Access pipeline project last week, the Greenpeace release stated.

A project of the Texas-based Energy Transfer Partners (ETP), the 1,172-mile pipeline would carry fracked oil from the Bakken formation in North Dakota through South Dakota and Iowa into Illinois. Along the way, the pipeline would pass under the Missouri River and eight other major waterways, and through Standing Rock Sioux Tribal land.

The project poses a “significant threat” to the water supply of the Standing Rock Sioux and millions of people downstream, according to Greenpeace. It would also desecrate sacred burial grounds and other historic tribal sites.

Native Americans at Standing Rock, who have been protesting the $3.8 billion pipeline project for months, have issued a national call to action targeting the banks and companies behind the project.

Opponents contend that the pipeline violates the United Nations Declaration on the Rights of Indigenous Peoples (UNDRIP), which the United States has signed. Protesters also say the project violates the 1851 Fort Laramie Treaty.

The protest at TD Bank is one of many across the country targeting TD Bank and the Army Corps of Engineers, which has not yet issued the permit ETP needs to dig under the Missouri River at Standing Rock. ETP officials say the company is unwilling to reroute the pipeline.

The company last week sought a court judgment declaring that it has the legal right of way to complete and operate the Dakota Access pipeline without any further action from the Army Corps of Engineers.

Thousands joined in protests at U.S. Army Corps of Engineers offices and banks across the country last Tuesday, after leaders of the Native American resistance at Standing Rock called for a national day of action.

The months-long protest has become the largest Native American mobilization in almost 150 years, using social media to garner online support around the world.