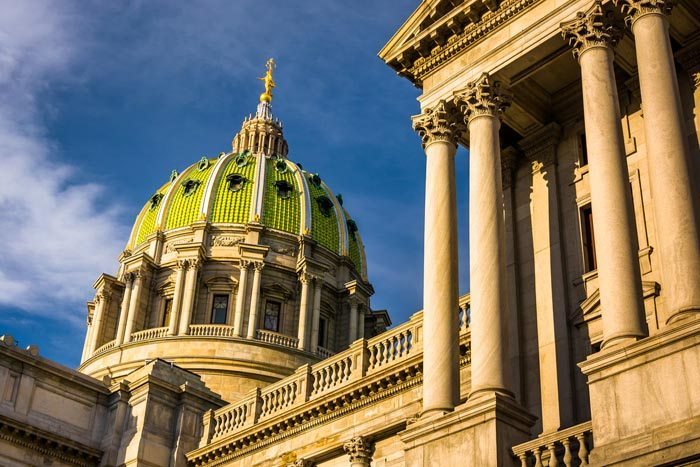 Stack noted that though the state’s governor has vowed to veto the measure should the state senate take it up and pass the anti-choice bill, the voting margins in the house were “close to the two-thirds margin needed to override a gubernatorial veto.” Republicans hold huge majorities in both chambers of the Pennsylvania legislature. Pennsylvania Capitol via Shutterstock

Pennsylvania Lt. Gov. Mike Stack (D) expressed “regret” for voting as a state senator in favor of an anti-choice measure passed under the guise of protecting pregnant people’s health. He urged state lawmakers not to make the same mistake in the coming legislative session.

“In 2011, legislation came before the state Senate to place new requirements on abortion providers,” Stack wrote in an opinion piece published Tuesday on Philly.com. “In the wake of the Dr. Kermit Gosnell matter, the legislation was couched as an effort to protect women’s health. Too late, I realized it was really an attack on lawful abortion providers and on women’s rights.”

“Of all the votes I cast as a state senator, it might be the one I regret the most,” Stack wrote.

Pennsylvania’s Act 122 is a targeted regulation of abortion providers (TRAP) law passed in 2011, requiring clinics in the state to be licensed as ambulatory surgical facilities.

Though the law purported to help safeguard the health of pregnant people, it restricted access to abortion care in the state. Two years after Act 122 went into effect, five clinics closed their doors, though “it’s unclear whether the stricter regulations were the only reason they closed,” according to NPR.

Stack was among the 32 state senators who voted in favor of the law.

“Knowing what I know now, I would have voted ‘no'” on that measure, said Stack.

Similar laws in other states began to fall soon after the Roberts Court’s decision.

The lieutenant governor criticized HB 1948, an anti-choice measure passed by state house Republicans and sent to the state senate that would enact a 20-week abortion ban and outlaw “dismemberment abortions” except during medical emergencies. Such laws target dilation and evacuation (D and E) procedures, which are commonly used during second-trimester abortions and after miscarriages.

“Once again, we see in HB 1948 a bid to reduce access to safe legal abortion under the guise of guarding a woman’s health, rather than more rigorously enforcing laws already on the books to protect women’s health and avoid more Gosnells,” said Stack. “As in Texas, some in Pennsylvania are attempting to put hurdles in front of women seeking reproductive health care – and, in the process, risking women’s health and safety.”

Stack noted that though the state’s governor has vowed to veto the measure should the state senate take it up and pass the anti-choice bill, the voting margins in the house were “close to the two-thirds margin needed to override a gubernatorial veto.”

Republicans hold huge majorities in both chambers of the Pennsylvania legislature.

Stack urged Pennsylvania lawmakers to re-examine the measure and what it would mean for reproductive health care in the state.

“HB 1948 is an assault on a woman’s ability to make the decision that’s best for her and her family, nothing more,” said Stack. “I was in those lawmakers’ shoes several years ago, and I made the wrong decision. They have an opportunity to learn a lesson from my experience.”