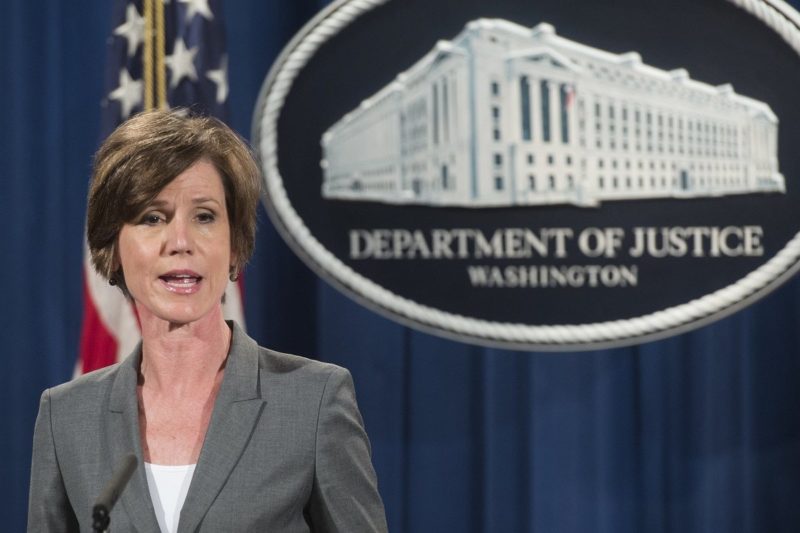 The Department of Justice (DOJ) announced yesterday that it will end its use of for-profit prisons. Saul Loeb/AFP/Getty Images

The Department of Justice (DOJ) announced yesterday that it will end its use of for-profit prisons.

The department cited a decline in the prison population and private prisons’ failure to maintain the same level of safety and security as the Federal Bureau of Prisons (BOP).

BOP will amend solicitation for prison contracts of 10,800 beds to no more than 3,600 beds. By May 2017, the total BOP private prison population will be less than 14,200, a 50 percent reduction from its high in 2013 of 220,000. All of the Bureau’s contracts with private prison companies are term-limited and subject to renewal or termination.

The DOJ is recommending the BOP work to reduce and eliminate more private prison facilities as contracts come up for renewal over the next five years.

The nation’s private prison system has been called a “national disgrace,” synonymous with “violence, abuse, and death.”

In a 2013 ACLU lawsuit against privately-run East Mississippi Correctional Facility (EMCF), for example, the ACLU described the prison as “an extremely dangerous facility operating in a perpetual state of crisis, where prisoners live in barbaric and horrific conditions and their basic human rights are violated daily.”

The DOJ’s Thursday announcement will not affect immigrant detention centers run by ICE and contracted to private prison companies like GEO Group and Corrections Corporation of America (CCA), both of which have long histories of human rights abuses in their detention centers, including dozens of cases of in-custody deaths.

It remains unknown if ICE will continue to contract with private prison companies. Most privately-operated prisons within the BOP are Criminal Alien Requirement (CAR) prisons, which hold noncitizens who have been criminally prosecuted for crossing the border, according to a press release from Grassroots Leadership.

“This announcement will likely mark the end of segregated federal prisons for non-citizens, though it remains to be seen how the BOP will carry out this change,” the organization said in its statement.

Silky Shah, co-director of Detention Watch Network, a coalition challenging the injustices of the U.S. immigration detention and deportation system, said in a statement that the DOJ’s announcement is “a major turning point” in the struggle against mass incarceration.

“This is the first time that a federal agency issued a sweeping—and long overdue—rebuke to the private prison industry. It is time to take a hard look at the outsized role of incarceration in American society, which has shattered lives and communities across the country,” Shah said. “With this news, we call on the Department of Homeland Security to follow suit and break their ties with private prison companies that operate more than half of ICE immigrant detention facilities as a step towards ending detention completely.”

CAR prisons were the focus of a recent Nation investigation about the poor medical care provided in these privately-run, immigrant-only prisons. The CCA-run prison featured in the Nation investigation, New Mexico’s Cibola County Correctional Center, will be shut down as a result of the DOJ announcement. CCA ran Cibola for 16 years and was notified by the BOP of its impending closure in July.

In a book released last month by Grassroots Leadership, the organization revealed that many immigrants incarcerated in CAR prisons are sentenced for one of two federal charges: misdemeanor improper entry or felony improper re-entry.

“These two charges account for half of all federal prosecutions although they are merely status offenses for crossing the border without proper documentation, and do not fall under DOJ priorities,” Grassroots Leadership reported.

“This decision will take the profit motive out of the BOP’s incarceration of non-citizens prosecuted for crossing the border,” Bethany Carson, researcher and organizer at Grassroots Leadership, said in a press release. “We hope that this decision will be a stepping stone for the DOJ to end the use of segregated prisons for non-citizens and de-prioritize improper entry and re-entry prosecutions.”

Policy center In The Public Interest (ITPI) reported in February that private prison companies “collect thousands of tax dollars in profit for every incarcerated person in their facilities.”

“If our criminal justice system stopped sending people to private jails and prisons, these tax dollars could be spent on programs that prevent incarceration and support prisoner rehabilitation,” ITPI reported.

“This [the DOJ announcement] is a major victory for those of us who have fought for years to expose the innumerable abuses and indignities in our Criminal Alien Requirement prisons and we’re overjoyed the Department of Justice has finally listened, however belatedly,” Terri Burke, executive director of the ACLU of Texas, said in a press release about the DOJ’s announcement. “Lives have been lost to this broken system. Good riddance.”