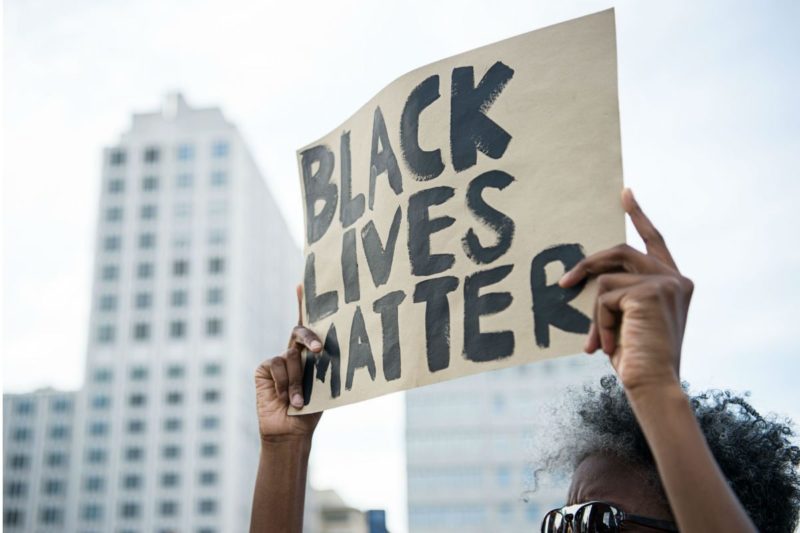 Far from being a movement in search of a crisis, Black Lives Matter and its intersectional analysis is just as well-suited to Canada as it is to the United States. Wolfram Kastl / Getty Images

As I walked the streets of Toronto last month, it occurred to me that Pride Week had become something of a national holiday there, where rainbow flags and the Maple Leaf banners flying in honor of Canada Day on July 1 were equally ubiquitous. For the first time in my many years visiting the city—the place where I myself came out—the juxtaposition of Pride and the anniversary of Confederation felt appropriate and natural.

For some, however, this crescendo of inclusive celebration was threatened by the Black Lives Matter Toronto (BLMTO) protest at the city’s Pride March, often nicknamed PrideTO. The group’s 30-minute, parade-stopping sit-in has since come in for predictable condemnation. The Globe and Mail’s Margaret Wente dubbed BLMTO “bullies,” sniffed that its tactics and concerns belonged to the United States, and asked why it didn’t care about Black-on-Black crime in Canada. The Toronto Sun’s Sue-Ann Levy, meanwhile, called BLMTO “Nobody Else Matters,” also saying it “bullied” Pride’s organizers and suggesting we all focus on the real object of exclusion within the LGBTQ community: gay members of the recently ousted Conservative Party.

There is a lot to learn from this Torontonian incident, particularly around managing polite liberal racism—an especially important civics lesson in light of the past month’s tragedies in the United States. Privileging the voices of white LGBTQ Canadians who claim racism is not a part of Canada’s history or present means ignoring the struggles of hundreds of thousands, many of whom are LGTBQ themselves.

Pride has always been a thoroughly political affair. It is, thus, hardly an “inappropriate time and place” for such a protest. It began as, and remains, a public forum for the unapologetic airing of our political concerns as a community in all its diversity. We may have reached a new phase of acceptance—the presence of Prime Minister Trudeau at Pride was a beautiful milestone in both Canadian and LGBTQ history—but Pride as a civic holiday must not obscure the challenges that remain. It is not a coincidence that the majority of transgender people murdered worldwide by the hundreds every year are Black and Latina, and that many of them are sex workers. That is part of the reality that BLMTO was responding to—the fact that racism amplifies homophobia and transphobia. In so doing, it was not just speaking for Black people, as many falsely contended, but advocating for queer and trans people of many ethnicities.

Even so, one parade-goer told the Globe and Mail: “It’s not about them. It’s gay pride, not black pride.” The very fact that Black LGBTQ people are asked to “choose” validates BLMTO’s complaint about Pride’s anti-Blackness, suggesting a culture where Black people will be thinly tolerated so long as they do not actually talk about or organize around being Black.

Indeed, BLMTO’s much-criticized list of demands seems not to have been read, much less understood. While drawing attention to the Black Lives Matter collective, it also advocated for South Asian LGBTQ people and those in First Nations communities, whose sense of not-entirely-belonging at an increasingly apolitical PrideTO it shares.

In each paint-by-numbers editorial, there was lip service paid to the “concerns” BLMTO has about Canadian police forces and racial discrimination, but the inconvenience of a briefly immobilized parade generated more coverage. Throughout, there has been a sense that Black Lives Matter didn’t belong in Canada, that the nation is somehow immune to racist law enforcement and, in fact, racism in general.

Yet to listen to the accounts of Black Canadians, the reality is rather different.

Janaya Khan, one of the co-founders of BLMTO, recently spoke to Canadian national magazine MacLean’s about the activist’s views on structural racism in the country. As a native of Toronto, they were able to speak quite forthrightly about growing up with racism in the city—up to and including being “carded” (a Canadian version of stop-and-frisk, wherein officers have the right to demand ID from random citizens) at Pride itself. And last year in Toronto Life, journalist and writer Desmond Cole talked about his experiences being raised throughout Ontario. He told a story of a traffic stop, none too different from the sort that killed Philando Castile earlier this month, after a passenger in his father’s car, Sana, had tossed a tissue out the window onto the highway. The officer made the young man walk back onto the highway and pick it up.

Cole wrote, “After Sana returned, the officer let us go. We drove off, overcome with silence until my father finally exploded. ‘You realize everyone in this car is Black, right?’ he thundered at Sana. ‘Yes, Uncle,’ Sana whispered, his head down and shoulders slumped. That afternoon, my imposing father and cocky cousin had trembled in fear over a discarded Kleenex.”

This story, of narrowly escaping the wrath of a white officer on the side of a motorway, could have come from any state in the Union. While Canada has many things to be proud of, it cannot claim that scouring racism from within its borders is among them. Those of us who have lived and worked within the country have an obligation to believe people like Cole and Khan when they describe what life has been like for them—and to do something about it rather than wring our hands in denial.

We should hardly be surprised that the United States and Canada, with parallel histories of violent colonial usurpation of Native land, should be plagued by many of the same racist diseases. There are many that Canada has shared with its southern neighbor—Canada had a number of anti-Chinese exclusion laws in the 19th and early 20th centuries, and it too had Japanese internment camps during the Second World War—but other racisms are distinctly homegrown.

The Quebecois sovereignty movement, for instance, veered into anti-Semitic fascism in the 1930s and ’40s. In later years, despite tacking to the left, it retained something of a xenophobic character because of its implicit vision of an independent Quebec dominated by white francophones who could trace their ancestry back to France. In a blind fury after narrowly losing the 1995 referendum on Quebecois independence, Premier Jacques Parizeau, the then-leader of the independence movement, infamously blamed “money and ethnic votes” for the loss. More recently, the provincial sovereigntist party, the Parti Quebecois, tried to impose a “Values Charter” on the province aimed at criminalizing the wearing of hijab and niqab in certain public spaces and functions. Ask Black francophones if they feel welcome in the province and you’ll get mixed answers at best, often related to racist policing from Quebec’s forces.

Speaking of policing and the character of public safety institutions, matters remain stark.

A 2015 Toronto Star special investigation found hundreds of Greater Toronto Area officers internally disciplined for “serious misconduct”—including the physical abuse of homeless people and committing domestic violence—remained on the force. In 2012, the same outlet documented the excessive rate at which Black and brown Torontonians were stopped and “carded.” The data is staggering: The number of stops of Black men actually exceeded the number of young Black men who live in certain policing districts. And according to the Star, despite making up less than 10 percent of Toronto’s population, Black Torontonians comprised at least 35 percent of those individuals shot to death by police since 1990. Between 2000 and 2006, they made up two-thirds.

Especially poignant for me as a Latina who loves Canada is the case of former Vancouver firefighter Luis Gonzales. Gonzales, who is of Salvadoran descent, is now filing a human rights complaint against Vancouver Fire and Rescue Services for what he deemed a racist work environment that included anti-Black racism, like shining a fire engine floodlight on Black women in the street and joking about how one still couldn’t see them.

One could go on; the disparate nature of these abuses points to the intersectional character of prejudice in Canada, something that BLM Toronto was quite explicit about in its protest. While anti-Black racism is distinct, the coalition perspective envisaged by Black Lives Matter, which builds community with LGBTQ, Muslim, South Asian, and First Nations groups, reflects an understanding of Canadian racism that is quite intelligible to U.S. observers.

It is here that we should return again to Margaret Wente’s slyly nationalistic claim that BLMTO is a foreign import, insensitive to progressive Canadian reality. In this, as in so many other areas, we must dispense with the use of Canadian civic liberalism as a shield against criticism; the nation got this far because of sometimes intemperate, often loud protest. Protests against anti-LGBTQ police brutality in the 1980s and ’90s, for example, set the stage for a Toronto where the CN Tower would be lit up in rainbow colors. And any number of Native rights actions in Canada have forced the nation to recognize both its colonial history and the racism of the present; from Idle No More and the Oka Crisis to the 2014 VIA Rail blockade, that movement is alive and well. Indeed, the blockade was part of a long movement to make the government acknowledge that thousands of missing and murdered Indigenous women constituted a crisis.

If we must wrap ourselves in the Maple Leaf flag, then let us at least acknowledge that peaceful protest is a very Canadian thing indeed, instead of redoubling racist insults by insinuating that Black Lives Matter is somehow foreign or that institutional racism is confined to the United States. Canada has achieved little of worth by merely chanting “but we’re not as bad as the United States!” like a mantra.

Far from being a movement in search of a crisis, Black Lives Matter and its intersectional analysis is just as well-suited to Canada as it is to the United States. In the end, it is not, per the national anthem, God who keeps this land “glorious and free,” but its people.