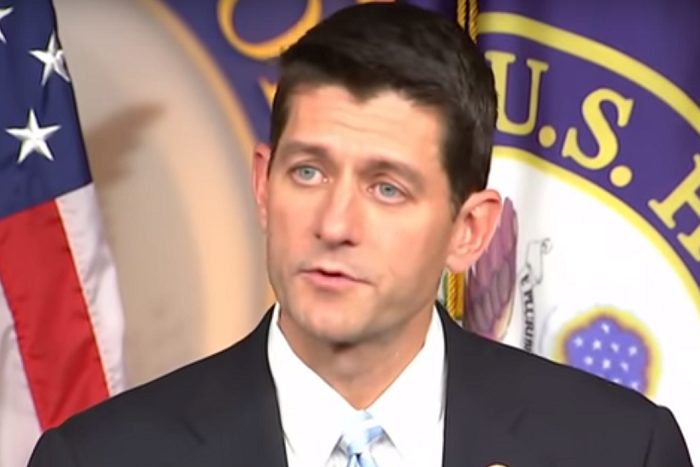 Though Paul Ryan has an undoubtedly abysmal history where gender and economic equity are concerned, the uncomfortable fact remains that his actions with regard to his personal life may have progressive effects. MSNBC / YouTube

Rep. Paul Ryan (R-WI) indicated he’d run for House speaker on Thursday, but only after putting forward a number of conditions, including a stipulation that he’d delegate fundraising and travel duties associated with the job in order to spend time with his wife and kids. “I cannot and will not give up my family time,” he said.

In response, D.C. pundits rolled their eyes. It must, at this juncture, be noted that the big bylines in political commentary are like the big roles in Congress. They are most often held by white men, who have not been traditionally asked whether they can “have it all” between a job and a family. “Er, okay,” wrote the Washington Post’s Chris Cillizza, calling it a “totally unrealistic idea.”

Welcome to the Mommy Wars, Paul Ryan. The media has largely represented it as just for women, but dads with family responsibilities can be screwed and scrutinized and patronized too. Of course, it’s easier to pick people apart than it is to restructure our economic and political systems to support working families in all their diverse forms, and that is the real reason why the Mommy Wars exist. And though Ryan has an undoubtedly abysmal history where gender and economic equity are concerned, the uncomfortable fact remains that his actions with regard to his personal life may have progressive effects.

Not to be outdone by those in the media, Ryan’s fellow conservative white men leapt up to do their thing. “It’s sort of an unreasonable demand to say you’re not going to work on weekends,” Rep. Thomas Massie (R-KY) said.

Meanwhile, some conservatives blasted Ryan as a royal king expressing a sense of entitlement not available to lower-wage workers. Radio host Laura Ingraham, for example, noted that construction workers, restaurant and retail employees, and nurses spend weekends away from their families on the job—not an incorrect assessment, but a bit of a head-spinning one, considering the right wing continuously blocks policies that help working families and tries to strip collective bargaining rights that improve working conditions.

Other conservatives took Ryan’s side. Erick Erickson, who is typically so unsupportive of others’ family decisions and needs that he nicknamed Wendy Davis “abortion Barbie,” tweeted, “There are many things about which I might criticize Paul Ryan. Wanting to spend weekends with his family is not one of them. Good for him.”

As it happens, Paul Ryan is a most unlikely figure in this fight: As a budget hawk, he has made it his job to crap on families Monday through Friday. As Robin Marty and other feminist writers and advocates have noted, Ryan and his allies have blocked family leave policies, and his own budget proposals cut child-care subsidies. Paul Ryan’s atrocious record where reproductive justice is concerned further extends to his crusades against abortion, contraception, and access to health care; his obsession with shredding the social safety net; and his non-presence on police violence against young people of color.

Because of such hypocrisy, it’s hard to feel bad for Ryan as he fights his battle in the Mommy Wars. And yet, the uncomfortable fact remains that if Paul Ryan successfully shows the world that the most powerful man in Congress can do the work without scrimping on family duties, more people may demand the structural supports and policy changes required to let all parents do the same.

Corporate women’s empowerment guru Sheryl Sandberg seemed to recognize this, at least on some level, when she gave Paul Ryan a Lean In award on Facebook. She was promptly trashed in her comments and by a man writing for Gawker. Sandberg, apparently ever-oblivious to the hard policy changes required for gender equality for those of us who aren’t getting CEO and speakership job offers, was wrong to give Ryan a feminist award because he’s one of the last people in this country who deserves one. But she also had a hell of a point: It’s a big deal when a man takes responsibility for caring for his family.

It’s a huge deal, actually, that this discussion is happening within the confines of the conservative movement, and that it’s about a man taking a promotion rather than a woman. One can only imagine, for instance, what would have been said about Rep. Cathy McMorris Rodgers (R-WA) if she were seriously considered for this post—whether she brought up family responsibilities and how she planned to juggle them or not, it would have been a major obsession of her caucus and the media. In bringing himself into this sexist fray, Ryan may be bringing us one baby-step closer to loosening rigid gender roles about caregiving.

Note, for example, the reaction of Rep. Mo Brooks (R-AL), to the situation. “He is a father,” Brooks said. “He has young children. He does not have the time to do the speaker’s job as it has been done in the past.” It’s fascinating to hear a deeply conservative man honor Ryan’s desire to take care of his kids, rather than suggesting he do the job and outsource the family time to his wife, as a number of congressmen presumably do. Maybe, in some small, hypocritical way, the right is starting to acknowledge its approach to family policy simply doesn’t work.

If Paul Ryan becomes House speaker, we would almost certainly see more of his far-right ideology and hostage-happy caucus. Still, it’s the pinnacle unfairness of feminist progress, but it is what it is: When men say they need changes that would just so happen to benefit women, they’re more likely to be taken seriously by other men in power rather than brushed aside. The sad fact is that the Mommy Wars are more likely to end when dads are roped in too.

It remains to be seen whether Paul Ryan will be a transformative figure within the Mommy Wars. Just what would happen if more workers—men, women, public officials, corporate big shots, hourly workers—dug in their heels and demanded family time? It’s delusional to expect Ryan to champion working families on the policy front, but on a cultural front, working parents across the country will be watching to see if it all shakes out.