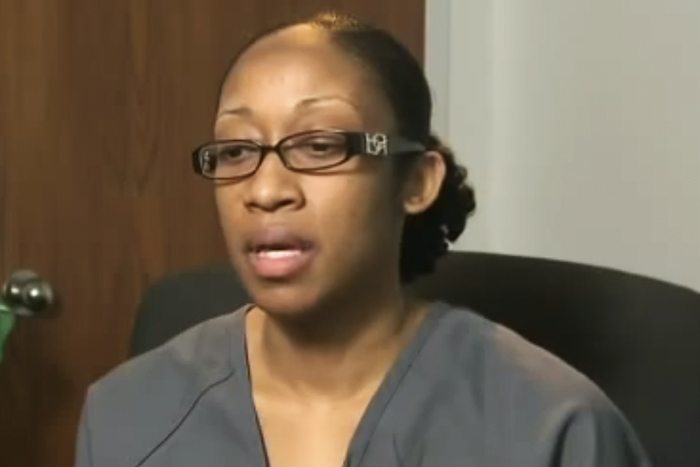 Marissa Alexander’s story resonates with me, not because I am a mother, or even a past victim of domestic violence, but because my life has been greatly affected by the systematic expansion of the prison system and excessive criminalization of my community. CNN / YouTube

Marissa Alexander, a Florida mother of three, is currently undergoing a retrial and facing 60 years in prison for firing a warning shot into the air to ward off her abusive and estranged husband. Though the bullet didn’t hurt anyone, Alexander would be serving a 20-year sentence if the ruling had not been overturned following her first trial. She is Black and a woman, and that’s all those who prosecuted her cared to know.

Her imprisonment and the historical injustices suffered by so many Black and brown people have led to a major uproar and deeper conversation about the criminalization of Black women and how it has significant effects on the Black family structure. The criminalization of the Black community is breaking up the Black family and by doing so is perpetuating the cycles of poverty and oppression in our society, especially when Black children are being put in foster care at a greater rate than other children.

Now that I’ve shared some of Alexander’s story, here is a snapshot of mine.

It’s 3:00 a.m. I am awakened by bright lights and men with big attitudes. Police officers have entered my mother’s home without warrants, guns at the ready, pointed at my 18-year-old brother. I have never felt more in danger than I did at that point, surrounded by individuals whom I’m supposed to trust to protect me. Instantly I realize that my little brother, whom they assume is my big brother—the person they are really after, for missing a court date—is a threat simply because of his Black maleness.

My big brother is not home that night, but the police find him at a friends’ house a few weeks later. I recall seeing my brother’s scars on his arms and shoulders from that day. The wounds never healed properly from the dogs that the police unleashed on him; the dogs bit into him to the muscle, and the scars, visible and invisible, never fully healed. He was handcuffed and hauled away, and I was left behind—writing to him while he was in jail, then prison.

He was a criminal and he was Black; that’s all the police cared to know when they treated him in that violent manner.

Marissa Alexander’s story resonates with me, not because I am a mother, or even a past victim of domestic violence, but because even before the moment police stormed my home, my life has been greatly affected by the systematic expansion of the prison system and excessive criminalization of my community. At a time when lines are drawn on the value of Black lives, we must unearth and fight how the unjust system harms most those who are already suffering.

While the specifics of Alexander’s trial and defense are unique, she is not alone. Thirty percent of African-American women have experienced domestic abuse, putting their lives in constant danger. This has been seen time and time again, and is currently a mainstream issue because of video that surfaced of Ray Rice abusing his now wife in an elevator. Although the Ray Rice/NFL scandal has received international attention and criticism, so many more women experience this violence every day and will be forgotten when the next big story hits. There is a clear link between intimate partner violence and a person’s ability to maintain bodily autonomy and care for their children—two crucial tenets of reproductive justice. She may have successfully shooed away her abuser, but instead of supporting her in finding safety and protecting her children, the state has relinquished Alexander’s freedom and her ability to bond with her youngest child.

Another way the justice system affects the Black family can be seen in how incarceration disproportionately affects people of color. Keeping a family structure intact is nearly impossible with the incarceration of a parent. Separated children are often put into foster care, even though studies show that children raised in the foster care system are more likely to end up in the criminal justice system in the future.

Dr. Dorothy Roberts is right: Incarceration of women “inflicts incalculable damage to communities …. [transferring] racial disadvantage to the next generation.”

Roberts has also clearly laid out the intersections of the foster care and prison systems and their disproportionate impact on Black women. She writes that the fact that one-third of foster care children are Black and landed there after being removed from Black women’s care “is evidence of a form of punitive governance that perpetuates social inequality.”

Nearly 80 percent of women behind bars are mothers serving time for offenses largely related to domestic violence, sexual abuse, drug addiction, other health problems, and homelessness. In fact, over three-quarters of the women sitting in prisons have histories of severe violence by an intimate partner as adults, and 82 percent suffered physical or sexual abuse as children. This is another example of how the justice system fails women who are actually in need of counseling programs, support groups, and treatment programs so that they can live and raise their families in a productive and healthy way.

Instead, from 1986 to 1991 the incarceration rate of Black women drug offenders increased 828 percent. In 2010, Black women were put in jail at nearly three times the rate of white women. And, the majority of jailed women lived with their minor children before their arrest. These trends do not seem to be slowing.

The criminalization of Black women makes it nearly impossible for Black women to care for our families. When we do try and protect our families we’re punished, as in the case of Marissa Alexander, and even when we’re not punished our children are being harassed and harmed. This injustice toward Black mothers cannot continue!

Far from rehabilitating in the ways our communities need, this system is attempting to break us.

There was never a mention of drug rehab programs or rehabilitation programs to help my brother rejoin and be productive in society.

The disproportionate and constant surveillance, harassment, threats, arrests, and family separation experienced by my older brother, and many Black men and women in my community, illustrates how our justice system fails people of color, and hurts the communities that need justice most.

Amidst this dire situation, if there’s one thing I know about my folks, it is that we are resilient: We will find a way to survive, fight back, and keep on. Organizations and individuals are seeing this attack on families of color and are taking a stand to protect our family and communities. SisterSong and the Free Marissa Now campaign joined together over the summer to host “Standing Our Ground”—an event to discuss the intersections of the (in)justice system and reproductive justice in the case of Marissa Alexander and others, and to shed light on attacks of this on communities of color throughout the nation. Having attended the conference, I was struck by all the organizations and beautiful women of color who showed up—bringing their expertise and experiences to the table. I knew I was not alone. My story, our suffering is connected. That power and the determination to win the battle for our rights and the rights of our families are carrying me through the events in Ferguson, Missouri, where a senseless killing and the outrage that followed show us that our basic rights to live are being challenged.

Conversations like these are lifting the veil that has obscured the connections between domestic violence, reproductive justice, and the criminalization our communities experience for simply being. Things will only improve when Black women and mothers are seen as human—when our lives are treated as they matter as much as anyone else’s; when our bodies and privacy cannot be violated, and if they are the incidents are met with public outrage; and when communities join together to fight laws that turn those suffering from violence into criminals.

It’s become clear that in order for our people to survive and thrive we must call out this unjust criminal system, and take a stand for ourselves. The “American dream” sold to us never included communities of color, and doesn’t enable us to raise our families in safe environments. We as women of color—often the foundation and heads of our households—need to start trusting ourselves and making our own seats at the table. No longer should officers be able to push us around in our own homes and take away our right to protect our families.

We are the experts on our communities while those in power are just outsiders looking in with no real connections to our day-to-day lives and lived experiences. We’re told that prisons are supposed to protect our families from danger, but in reality the policing of our communities and families presents a danger so grave, I question whether we can survive it. We must stop living in fear and call out those in positions of power and the policies they create that are out to harm and hinder our communities. We must join together and stop being our toughest critics, because now more than ever our communities are under attack. We have come to a time in history, again, where simply being able to walk outside and live our lives is being threatened. We are resilient as a community and our resilience is being challenged. It’s no longer time to be on the defensive; it’s time we stand because it’s clear that our justice system isn’t looking out for us.