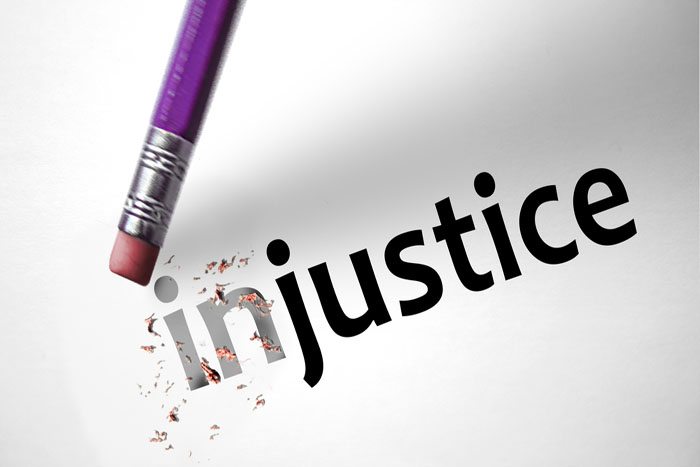 The question that must be asked, in plain language, is: Do imperfect people deserve death for their imperfection? Injustice via Shutterstock

To write about trans women is to come to grips with a painful fact: Very few of us are “perfect victims.”

I was reminded of this in the midst of the activism surrounding Jane Doe—a 16-year-old trans girl who was transferred from child protective services to solitary confinement in a Connecticut state prison. Those most detached from her situation piously observe that she is in solitary confinement because she allegedly brutalized Department of Children and Families (DCF) staff when she was under their care.

On the Feministing Facebook page, one woman lengthily excerpted the litany of accusations against Doe from a New Haven Register article—breaking a woman’s jaw and temporarily blinding her in one eye—as if this were an adequate response to an article I wrote defending Doe’s right to human dignity.

This, of course, left out the parts of the Register report that detailed Doe’s abuse at length, including accusations that she had been raped and otherwise sexually exploited while under DCF care, but we’ll return to that later.

Jane Doe’s situation reminds me of the circumstances surrounding Essay Anne Vanderbilt, better known as Dr. V, who committed suicide after a Grantland writer dug relentlessly into her past and sought to prove that she had lied about having a PhD—outing her publicly as a trans woman in the process, against her clearly expressed wishes to the journalist in question.

Always, there would be a tide of commenters to break against any article that I or others had written in defense of these women’s right to draw breath.

This familiar pattern traces its well-worn grooves during most public mentions of trans women’s distress.

There are women I could mention here who have been so pilloried, but who I must refrain from naming because, ironically, they survived. I would not wish to reopen old wounds for that sisterhood of silent survivors trying to get on with the very lives nearly stolen from them.

There are those who are not so silent, however, like CeCe McDonald; recently released from prison after serving a sentence for killing a would-be hate criminal in self-defense, she is now an advocate for transgender justice. But to this day she is still pilloried as an imperfect victim for the fact that she took a life. For failing to meekly accept the oblivion her swastika-tattooed assailant was thrusting upon her, many seem to suggest that she deserved either death, or a considerably longer prison term among men.

Now, as if in an echo chamber of those commenters, on Feministing’s own page I find myself reading missives from cisgender women who call Jane Doe’s solitary confinement without charge or trial “justice” for unproven and context-less crimes against DCF staff.

The unspoken implication was always that the real or perceived imperfections of these trans women meant that they should be left like so much carrion on the field, to be picked apart by whosoever should chance by—unto death, if need be. And it seems death is just what the doctor ordered; time and again one encounters a startling lack of consideration for the consequences these women suffered. CeCe McDonald nearly died, Dr. V did die, and Jane Doe’s solitary confinement is a waking death for any sentient being.

But this is just fine, so far as some are concerned. A woman’s life is the pound of flesh demanded by her perceived sins.

As feminists, we should notice a pattern here.

Women are so often expected to be perfect victims. If we are raped, we must be upper middle class, or honors students, or devoutly religious, preferably white, caught unawarein the midst of innocent activities by a perfectly rapacious and evil attacker. All other circumstances are unforgivably complicated, and we throw our hands up as if to say that the rape is an acceptable consequence of the victim’s imperfection. She drank, she was out late, she went somewhere strange, she was partying, she was a sex worker, she did not out herself as trans, she liked revealing clothes—whatever excuse or perceived imperfection we can grab a fistful of, all in the hopes of confirming our shared just-world hypothesis, that collective pseudo-ideological disease of uncounted millions.

We do this with other maladies suffered by women, of course, including suicide or incarceration. We want to believe that they somehow deserve it, even as we are too cowardly to openly say, “She deserves to die for what she did.” That uncouth bluntness is instead masked by equivocal dissembling about her faults and failings: Dr. V lied about her degree to help sell a golf putter that actually did what it claimed, therefore she deserves to die; Jane Doe was accused of hitting DCF staff and being violent, therefore we can eschew a trial and send her to solitary even while she’s still a minor (and she probably deserves to die too).

I could write a jeremiad about “so-called morality” being a “bourgeois hypocrisy” or somesuch nonsense, but that would be building a good deal of vacuous scaffolding on the backs of women whose struggles obviate the easy bromides of radical purity. Morality matters, yes, and we should all have the courage to say so in our cynical age. The true moral crime revealed by the experiences of these trans women, however, is that immoral choices were forced upon them—that our society only permits such choices as the price of survival for some.

It is not hypocritical to believe in morality, but it is hypocritical to condemn these women as if their individual actions are somehow completely divorced from the terrifying logic of our gender order.

Poverty, dehumanization, the immediate threat of death, and scarcity can distort our better angels, warping them into grotesque demons of raw necessity.

This is not an excuse, but it is something to think about when your arguments suggest that a troubled woman’s traumas are “just desserts” of some sort. Jane Doe, for example, has lived a life of sexual and physical abuse at the hands of powerful adults—as a trans girl of color without a home she was at the very nadir of vulnerability. It will take a good deal more sympathetic investigation to understand why she lashed out against DCF staff—assuming that even happened, of course. The department had an interest in trumping up charges against Doe to justify its decision to get rid of her. Trans girls do occasion constitutional crises of institutional gender, and it is often easier to simply chuck them.

For her part, Doe claims some of the charges are fabrications, while others are examples of a post-traumatic stress disorder (PTSD)-fueled lashing-out against disrespectful or boundary-violating adults. For some of the commenters I’ve seen, the fact that she’s trans is indictment enough (evidenced by their misgendering of Jane Doe).

The question that must be asked, in plain language, is: Do imperfect people deserve death for their imperfection?

But so often, in so many of these cases, the public brays for the blood of the flawed woman, whether or not she actually committed any vice. Once again, women’s bodies are the currency accepted at all outlets.

The point of all this is to argue against those who implicitly suggest I and others should avoid writing in defense of people like Jane Doe because they do not come to us as perfect victims, unsplattered by the blood of their traumas and abuses.

The word “oppression” is overused these days, or at least it is often poorly defined, and its widely varying degrees are collapsed into an irksome singularity that favors Tumblr’s brevity while doing little for empirical understanding. But if the word oppression means anything, part of that meaning surely is the fact that deep moral compromise becomes a way of life. To be a trans woman, even in this relatively enlightened time, entails hard choices. Dr. V’s invented doctorate was part of a whole invented history that was meant to hide her trans-ness from investors and golfers alike. Jane Doe’s story needs a fuller telling, meanwhile, but I would hardly be surprised if her violence was an unequal-but-opposite reaction to the institutional violence she had long been subjected to by the DCF.

Each case challenges us with some moral complications—gray areas that seem to obviate a black-and-white understanding of the situation. But moral complexity is often mistakenly seen as an impediment to moral clarity. Moral clarity is what prevents us from throwing our hands up at difficult situations and leaving them to the four winds of whatever nameless fate one chooses to believe in”: Karma, God’s will, “everything happens for a reason,” “just desserts.” Moral clarity would tell you that Jane Doe’s solitary confinement is a crime. It would remind you that morality and justice belong to us all, not only to those with the luxury of perfection. It would remind you that no one deserves to die for their mistakes.

The rest can be sorted out, but we must resist the impulse to gin up cyber mob justice that condemns women like McDonald, Dr. V, Doe, or nameless others to death, while also remembering and affirming their humanity. This is what moral clarity is for.

We glory in fictional men whose moral compromises make them complex and interesting characters, blurring the line between “hero” and “anti-hero” into morally bankrupt irrelevance. We get the vapors over dark, brooding, gritty men. But when confronted with real, flesh-and-blood women who have had to make hard choices and whose moral scorecard includes more than a few red marks, suddenly, as if to guiltily make up for all those reruns of Mad Men or House of Cards, we barrage them with eye-for-an-eye invective.

In the cases of Dr. V, and now Jane Doe, this interacts violently with latent transmisogyny in our culture. In our pantheon of stereotypes, trans women are the trickster goddesses: inveterate deceivers forever lurking in the shadows of cisgender life, waiting to be slain once we are exposed to the light. Life imitates art, as they say.

But make no mistake. The fate of these trans women is a sentence that is laid down by our society to many cisgender women as well: Women are expected to be perfect upon our pedestals. The trick is that trans women and women of color are forever regarded as inherently imperfect.

Their stories deserve telling. Patriarchy flaws us, demands imperfection as the price of survival, and then condemns us to oblivion our purported immorality. We are not absolved of responsibility for our actions, to the extent our actions may actually be transgressions, but neither should we be condemned to death for them. We all deserve a chance to thrive.

If human dignity means something, then it is surely that.